"This is something we’re used to handling, so most of us handle it well, but we’re tired. We’re done. This is it. This is our last straw," said senior Ashanti Cox.

Cox said she was the first person invited into an Instagram group chat Wednesday night with a profane title, where an anonymous user criticized her for wearing a Black Lives Matter mask.

She said other members of the school’s Black Excellence Club were also invited into the group chat, where they were threatened and called racist names.

While most of the messages are too inappropriate to show on our website, some of the others read: 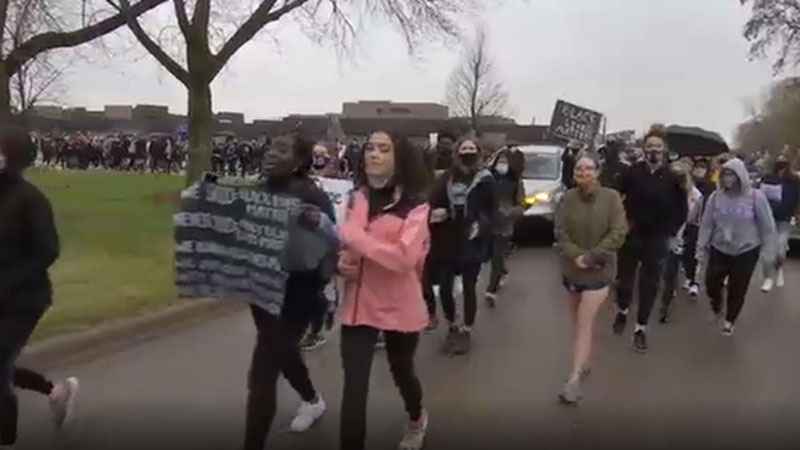 "Watch your back. We do not want you guys here."

"GET HANGED. DIE. KILL YOURSELF."

"That’s why George Floyd died can’t wait until everyone your color leaves like that."

"You should get hanged. You’re a dirty African girl. Nobody wants you here. Go to a black school, This is WHITE bear lake."

Senior Jessica Kabbe said she was also targeted in the messages.

"I’m still in shock. I know racism is still a thing, but I didn’t know people would take it to this extent. This is way too far. This is honestly just ridiculous. I feel hurt, I’m irritated, I’m angry, I’m uneasy. I just want to cry. I want to scream," Kabbe said.

White Bear Lake Police Department confirmed they are investigating the messages, which could range from disorderly conduct to terroristic threats. They said they may have to issue subpoenas to the social media sites to trace the messages in order to determine who sent them. The department said they take all threats very seriously, especially those directed at children.

She said she was encouraged to see the support of fellow students, who marched nearly two miles in the rain during Friday’s walkout, but she would like to see school administrators do more to confront racism among students.

"What my school can do better is just help regulate that saying the N-world and being racist is not normal. That shouldn’t be happening at a school. I shouldn’t feel uneasy or unsafe to come to school," Kabbe said.

Friday’s walkout, march and rally lasted nearly two hours. Some students pressed the principal in front of the crowd as to why the district has not acted sooner.

"We need to take a closer look at what we’re doing and do it much better," answered South Campus Principal Don Bosch.

Students also called on administrators to take reports of racism seriously and asked that school policies be reformed to include harsher penalties for hate speech and bullying.

"There are only 20% of us that are of color in this school. What are we supposed to do against 80% of people? We need them to help us, especially the adults," Cox said. "I just need a change, and if it has to start in little old White Bear Lake, Minnesota, then that’s where it’s going to start."

The school district did not respond to 5 EYEWITNESS NEWS’ request for an interview but shared this letter, which they sent to district families Thursday:

Please know that an investigation is underway to determine who is behind these deplorable, racist social media posts. We are working closely with our partners in law enforcement to determine as quickly as possible who is responsible.

We stand united in our commitment to ensure a safe, respectful environment for our students, and racism and racist behavior will not be tolerated.