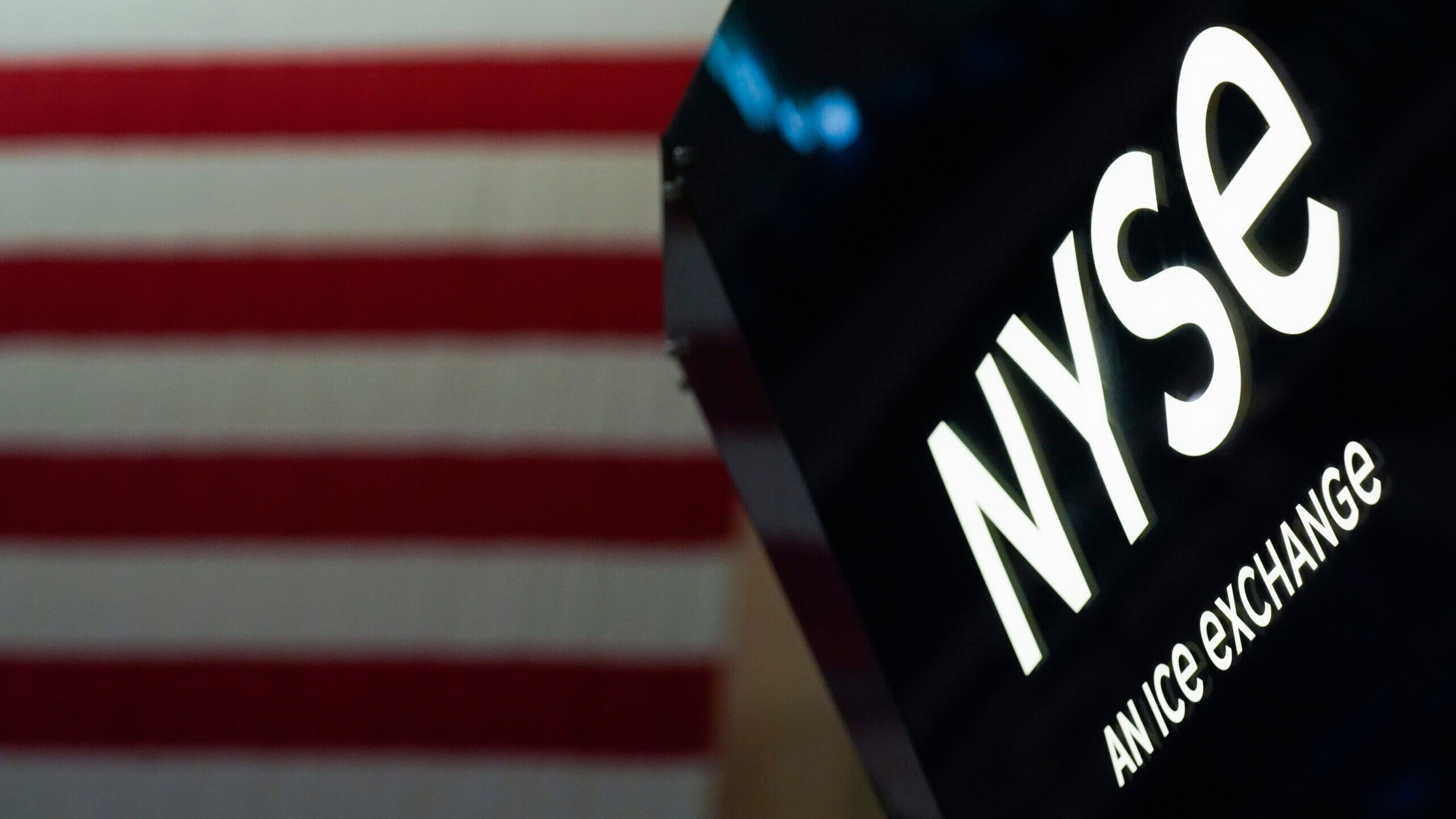 An NYSE sign is seen on the floor at the New York Stock Exchange in New York, Wednesday, June 15, 2022. Wall Street got back to selling on Thursday, reversing course a day after a climbing on hopes that the Federal Reserve's huge interest rate hike it made this week won't be a common practice in its ongoing fight against inflation. Stocks were opening sharply lower, sending the S&P 500 down 2.7%, and Treasury yields were moving higher again. (AP Photo/Seth Wenig)

Stocks wavered in turbulent trading on Wall Street Wednesday amid concerns about inflation and whether rising interest rates will help or hinder the economy.

The choppy trading follows a solid rally on Tuesday in what has been a turbulent period for the broader market, with daily and sometimes hourly swings from sharp gains to losses. The benchmark S&P 500 is currently in a bear market, which means it has dropped more than 20% from its most recent high, which was in January. It has also fallen in 10 of the last 11 weeks, but is holding on to gains so far for this week.

Much of the loss has been tied to concerns about rising inflation and the Federal Reserve’s plan to aggressively raise interest rates in order to temper inflation’s impact on consumers and businesses.

“There have been some new hurdles put in front of us,” said Sylvia Jablonski, chief investment officer at Defiance ETFs. As a result, she said, many investors are “sitting on the sidelines.”

Federal Reserve Chair Jerome Powell underscored the Fed’s determination to raise interest rates high enough to slow inflation, a commitment that has fanned concerns that the central bank’s fight against surging prices could tip the economy into recession. Powell is addressing Congress this week, starting with the Senate Banking Committee on Wednesday.

“We’re not trying to provoke and don’t think that we will need to provoke a recession,” Powell said. “But we do think it’s absolutely essential that we restore price stability, really for the benefit of the labor market as much as anything else.”

Powell’s testimony comes a week after the Fed raised its benchmark interest rate by three quarters of a percentage point, its biggest hike in nearly three decades. With inflation worsening, the Fed’s policymakers also forecast a more accelerated pace of rate hikes this year and next than they had predicted three months ago, with its key rate reaching 3.8% by the end of 2023. That would be its highest level in 15 years.

The Fed’s moves are happening as some discouraging signals have emerged about the economy, including sagging spending at retailers and soured consumer sentiment. The worries over inflation and interest rates have been worsened by a spike in energy and other key commodity prices following Russia’s invasion of Ukraine.

Record high gas prices have been taking a bigger bite out of consumers’ wallets and prompting a slowdown in spending elsewhere. That has prompted President Joe Biden to call on Congress to suspend federal gasoline and diesel taxes for three months, a move meant to ease financial pressures at the pump.

Inflation is at a four-decade high in the U.S. and has been prompting businesses to raise prices on everything from food to clothing. Consumer spending remained strong through most of the pandemic, but has been falling amid tighter pressure from inflation. Inflation is hitting records globally. Britain’s inflation reached a 40-year high of 9.1% in the 12 months to May.

Wall Street remains concerned about the Fed’s aggressive policy raising the risk of a recession, but Powell said another risk involves high inflation becoming entrenched in the economy if the central bank doesn’t take appropriate steps.

Bond yields fell sharply. The yield on the 10-year Treasury fell to 3.15% from 3.30% late Tuesday. Markets in Europe and Asia also fell.