As an avid outdoorsman, 40-year-old Luke Zimmer uses his YouTube channel to help others learn wilderness survival skills. He ends each video with the same message, “’Til next time — be safe, have fun, and as always, we are stronger together.”

At about 10:30 a.m. on Thursday, he spotted a woman stuck in the snow on 35W South near Johnson St. NE. Zimmer tried to tow her out, according to his family.

“That’s just the way he’s always been, my brother would help anyone,” said Tyler Zimmer, his younger brother. “He says he remembers just being under the car for a second or two looking for where to hook up, he said then the whole bumper where was looking had disappeared and then he was far away from both vehicles.”

Minnesota State Patrol confirmed they are looking for a gold or tan Toyota Sienna minivan that hit Zimmer and then drove off. The hit-and-run is under investigation. 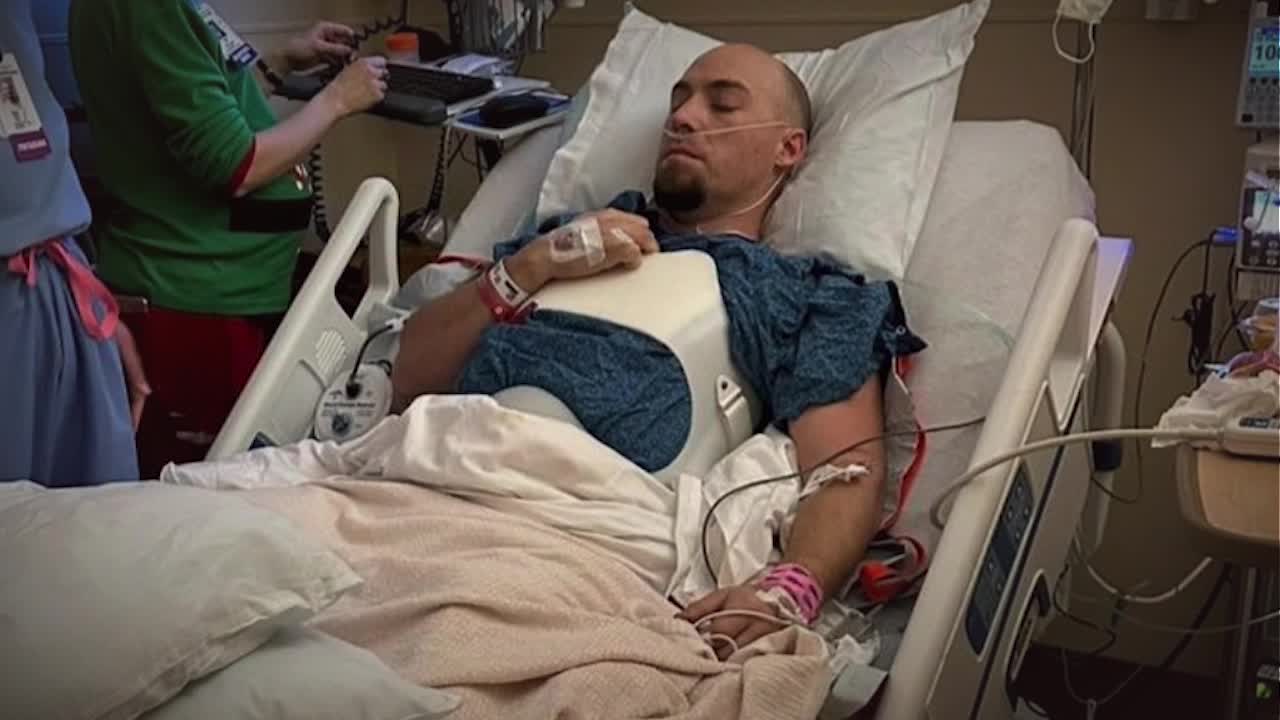 The crash launched Zimmer into a snowbank and left him with a shattered vertebrae and injured spinal cord, according to his family.

An off-duty paramedic saw it happen and stopped to help Zimmer.

“There’s other good people in the world,” said Tyler Zimmer. “He was off duty, he didn’t have to stop. I also brought this [hat]. I don’t know if it was the same person or a different person, they put this on his head and gave up their hat for my brother so he could stay warm in the snow.”

On a GoFundMe page set up for Zimmer, one person wrote, “There were several of us who stopped to help and keep him warm and comfortable as he lay in the snow. We covered him with a sleeping bag someone had in their car, put a hat on him, and tried to put little hand warmers around him. I hope he did not sustain any frost bite. He told me his name and that he worked on chimneys. I tried to lighten his mood and tell him that my two chimneys probably needed work. We put his belongings we found in his truck. One of the people who stopped was an EMT and took control of the situation […]”

Zimmer was eventually transported to HCMC, which is a level one trauma center, where he underwent an eight hour surgery to repair the damage.

“We are so thankful from the bottom of our hearts they really kept my brother alive,” said Tyler Zimmer. “Small acts like that have gone a long way and they really touched a lot of people as well as just saved a life.”

Zimmer has a 7-year-old daughter and a 10-year-old son. The injury kept him from them over Christmas.

His wife Michelle shared an update on Facebook on Wednesday, which said in part, “He currently says that his feet are numb and tingly but besides a couple broken ribs, a laceration, and his spinal damage, he is doing good and has full upper strength and is in good spirits! […] Recovery is going to be a long road but he is a fighter, and you guys have been amazing at cheering us on. So we are hopeful!”

She wrote that they are working to get him used to a wheel chair so he can leave the recovery floor and see his kids.

Zimmer will have to wear a brace that extends from his arms to his hips for six months, which will prevent him from working. He does brick, chimney and fireplace repair, which requires carrying heavy loads.

Kyle Zimmer said, while it will be a long recovery, “It’s a Christmas miracle that he survived at all.”