St. Paul’s Rondo neighborhood, split by I-94, may have a new beginning, one home at a time

For April Lucas and her 5-year-old daughter Kyla Monae, the times spent together at their South St. Paul home are precious — whether checking the plants in their garden or just a game of bean bag toss.

But Lucas says she’s never lost touch with the Rondo neighborhood, just minutes away in St. Paul. Family members, she says, still have a house there.

There are also countless childhood memories of the area, Lucas says — a place where she lived between 1970 and 1994. 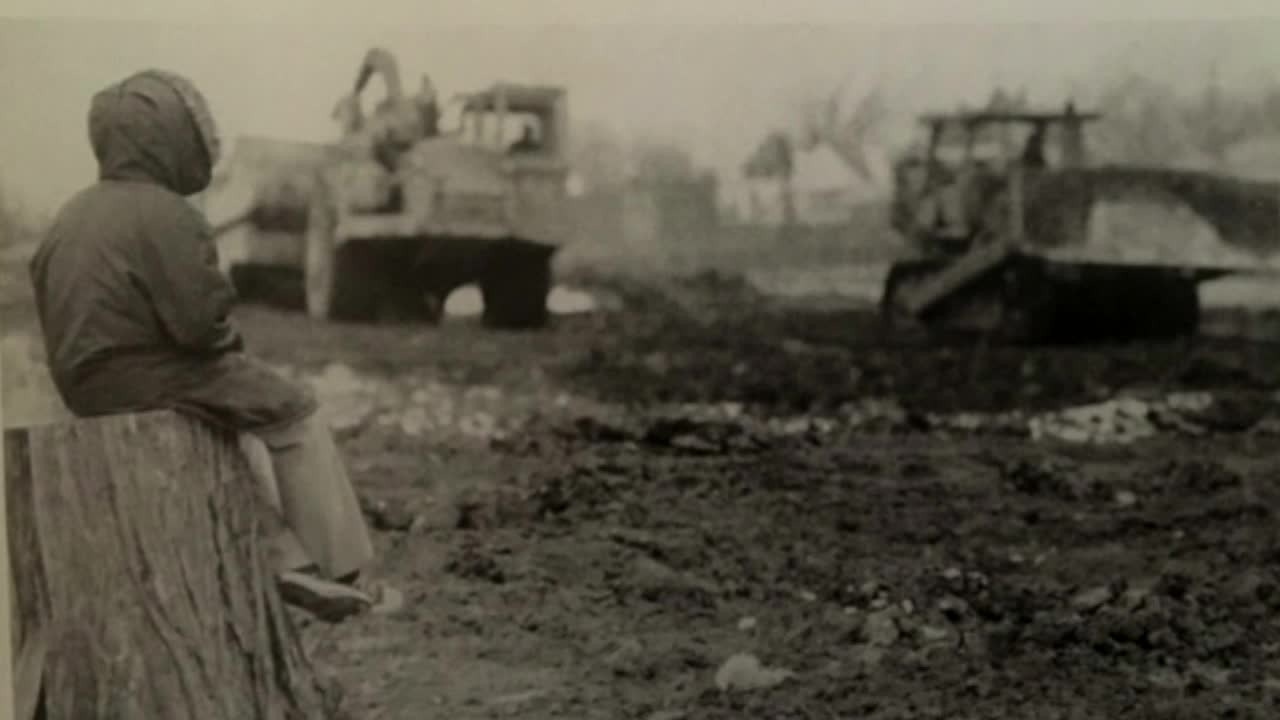 A child watches as bulldozers level what used to be the Rondo neighborhood in preparation for the new Interstate 94. (Courtesy of the Minnesota Historical Society)

“Entrepreneurship was very alive and well. We had barbers, we had mechanics,” Lucas recalls. “We had restaurants, we had boxing places, we had places for teens to go, we had places to dance.”

But then came Interstate 94.

The construction of the highway, starting in 1956, cut the neighborhood in two. The core of Rondo was demolished, and hundreds of families were displaced.

“There are 700 families that lost their homes,” recalls St. Paul Mayor Melvin Carter. “Folks who lost their businesses, folks who lost real estate, whose family inheritance was gutted.”

Carter says the freeway project had a devastating economic impact on Rondo: a loss, he says, of $157 million in home and commercial equity.

Carter’s own family was among those affected.

“My grandfather lost over a half-dozen commercial properties when the freeway came through and uprooted old Rondo,” the mayor says. “My father remembers seeing St. Paul Fire Department burning down his parents’ home as a training exercise.”

In his proposed budget, Carter wants to try something new: a proposed $2 million inheritance fund to assist those who lost property.

The fund would provide up to $100,000 in fully forgivable loans for low-income former Rondo residents and their descendants and could be used for down payments or repairs in any neighborhood in St. Paul.

Residents who decide to remain in Rondo would receive an additional $10,000.

Griffin says the nonprofit helps families buy a home while leasing the land from the trust.

If they sell, owners receive the amount paid toward their mortgage, plus a quarter of the appreciated value. The rest goes to the new owner, keeping the price affordable.

Griffin hopes the trust and the inheritance fund will work in tandem.

“As a daughter of Rondo myself, being and living and growing up in this community was wonderful,” she says. “The fund will go a long way to encourage people to come back to the neighborhood and stay in the neighborhood. It fits well with Rondo Community Land Trust work.”

Griffin says committed homeowners and renters with a financial stake in the area can also be a help in deterring crime.

“When you’re in a community with other people, you want to look out for your neighbor,” she explains. “When you’re renting or you’re in ownership and you have a connection to the community, you’re more apt to be looking out and be aware of things that are going on.”

The mayor’s office estimates roughly 40 homebuyers could potentially benefit from the inheritance fund. There’s no word yet on exactly how people will document their ties to Rondo.

The fund — part of the city budget — needs approval from the city council. That vote is expected sometime in December.

Carter hopes the program will be able to start administering loans in 2023.

“We got a long history of anti-poverty programs where they’re telling people where they can and cannot live,” the mayor says. “We didn’t want to repeat those mistakes, but we did want to create some premium for those folks who want to continue to reinvest and be a part of the story of old Rondo becoming the new Rondo.”

If the inheritance fund gets the green light, Lucas says she’ll apply so she can move back with her daughter to the place where she played and walked.

She hopes to not only return to Rondo but perhaps open a business in the neighborhood she’ll always call home.

“I see a bright, thriving business opportunity and families and people getting together,” Lucas says. “And I’m so excited to be a part of rebuilding what we once had. How we respected one another, how we were taught to care for one another. I’m excited about going home and doing that.”