St. Paul Police Chief Todd Axtell announced that he will not be pursuing a second term when his current term ends in June.

"It has been a wonderful and trying experience, one I will forever cherish," Axtell wrote, in part, on a Facebook post Wednesday. "The trust bestowed upon me by this city is truly humbling."

Axtell has been with the department for over 30 years.

"Serving as the Chief of Police for the City of Saint Paul and leading the best officers and civilians in the country has been my greatest professional honor," he said.

"The chief of police job isn’t always to agree with me all the time but our job is how we learn from each other and be able to work through those types of challenges to produce the types of results that Chief Axtell has led for our city," St. Paul Mayor Melvin Carter said after the announcement. "He’s been a really strong leader for this city and we are going to miss him around here." 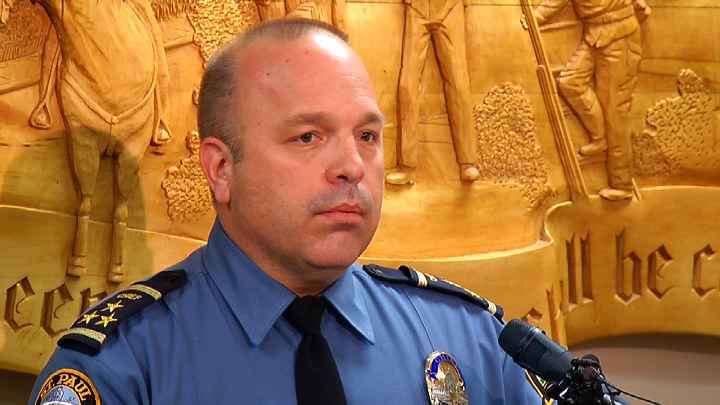 Community leaders also weighed in on the news, with one calling Axtell’s departure a significant loss.

"That’s the word we use most in St. Paul, a partnership, a partnership to me is real, it’s true, there’s trust on both sides, we’ve had that trust," Tyrone Terrill, president of the African American Leadership Council, said about his relationship with Axtell. "It’s a big loss for my community, the Black community, we’ve had a true trusted partnership with Todd Axtell, for me going back almost 22 years, I lost more than a chief today."

"Today is one of the saddest days that I’ve had in the city of St. Paul," Terrill added.

Rev. Darryl Spence, a faith leader in St. Paul, said, "Keeping the community policing model alive I think that what separates us from the other cities where crime is so high."

Spence said Axtell’s community policing model is vital for the next chief to continue.

"That connection, we don’t want to disrupt it now, we have so much going for us now," Spence said.

But not everyone was caught off-guard by the announcement.

"It doesn’t come as a total surprise," said Mark Ross, president of the St. Paul Police Federation. "I don’t know anybody who would do that job more than one term."

Ross said the police union had a unique relationship with Axtell over the years, and he hopes the new chief will continue that relationship.

"I want somebody who can maintain a positive relationship with Federation that we’ve enjoyed with Chief Axtell, even as worked through issues," Ross said.

5 EYEWITNESS NEWS also reached out to candidates running for St. Paul mayor for their reaction to Axtell’s departure. The person who wins the election next week will be tasked with finding Axtell’s replacement. Click here to read the responses.

Below is Axtell’s full statement regarding him stepping down:

Throughout my life, I’ve had the good fortune to be surrounded by people who possess the heart of a public servant. They make the most of and cherish every day.

My Mom and Dad have devoted their lives to their children, their community and their country, instilling in me the morals and ethics and values that continue to guide me through days both dark and filled with light.

Countless colleagues and community members showed me the importance of faith—faith in the inherent good people possess, faith in the resiliency of humanity, faith in myself.

And the police officers with whom I’ve worked over the past three decades have shown me that there is nothing more noble in life than answering the call to serve. No matter the pain you see people inflict on others, the innocent victims left physically and emotionally battered by violence, the vitriol or the constant calls for help, they keep coming back to serve a city they care about in their souls.

After a lifetime of sharing infinite love with my family, after basking in friendships old and new, and after 33 years of proudly wearing the badge, these are the things that matter most to me. I feel blessed to have a real and meaningful life, filled with so many personal and professional challenges and rewards.

Serving as the Chief of Police for the City of Saint Paul and leading the best officers and civilians in the country has been my greatest professional honor, and lately I’ve been thinking a lot about my future with the police department.

Five and a half years ago, I had the privilege of being sworn in as Saint Paul’s 41st Chief of Police. It’s an immense job that carries considerable weight and sacrifice. There’s no greater responsibility than protecting people, seeking justice for victims and working to keep police officers safe as they rush into the unknown to help others.

It has been a wonderful and trying experience, one I will forever cherish. The trust bestowed upon me by this city is truly humbling.

But today, I let the Mayor and the women and men of the SPPD know that I will not be pursuing a second term when my current six-year appointment ends next June.

Having been through this process before as a candidate, I know that selecting the next chief is a long journey, which is why I’m announcing this today.

This is a difficult decision, made after spending the last few months in deep reflection. I trust my instincts. I believe in the women and men of the SPPD. And I know that it’s time to move on to serve my community in another manner.

It’s also an exciting moment for all of us, because everyone—from the leadership team to patrol to the civilians—has worked so incredibly hard to lead from the front and to be part of a police department that truly reflects the values and diversity of the city. Every member of the SPPD understands that the only true authority we possess is the authority granted to us by the people we serve.

We have so many smart, caring and dedicated law enforcement professionals at all levels of the agency. With so much internal talent, your police department’s future is in good hands.

I’ve learned from those I admire that when you possess the heart of a public servant, you never stop trying to make a positive difference in the lives of your neighbors. I see it in Debbie Montgomery. I see it in Chiefs Finney, Harrington and Smith. I saw it in the way John Nasseff kept giving back throughout his amazing life. When I look into my heart, it’s crystal clear that I want to follow their lead.

One of the lessons my parents taught me was that a life well lived is a life dedicated to something greater than yourself. I still have a lot of years left to dedicate to being in service to others. The deep desire to make a positive difference still courses through my veins.

So, thank you for taking the time to read this long post. But most importantly, thank you for your trust, the support and the kindness you show to the officers and civilians who pour their hearts and souls into keeping you safe, and allowing me the honor of serving as your police chief.

This isn’t goodbye. We still have a lot of work to do. And I will continue to make the most of and cherish every day…