According to the Wright County Sheriff’s Office, law enforcement raided the home of 39-year-old Brandon Gardas around 8:30 p.m. An “armed confrontation” ensued, and Gardas was shot.

Gardas was loaded onto a helicopter and airlifted to a hospital nearby. The sheriff’s office did not have an update on his condition.

Authorities say no law enforcement personnel were harmed in the operation.

The area of the home on the 500 block of Central Avenue is being blocked off as investigators collect evidence. Residents are asked to stay clear from the scene. 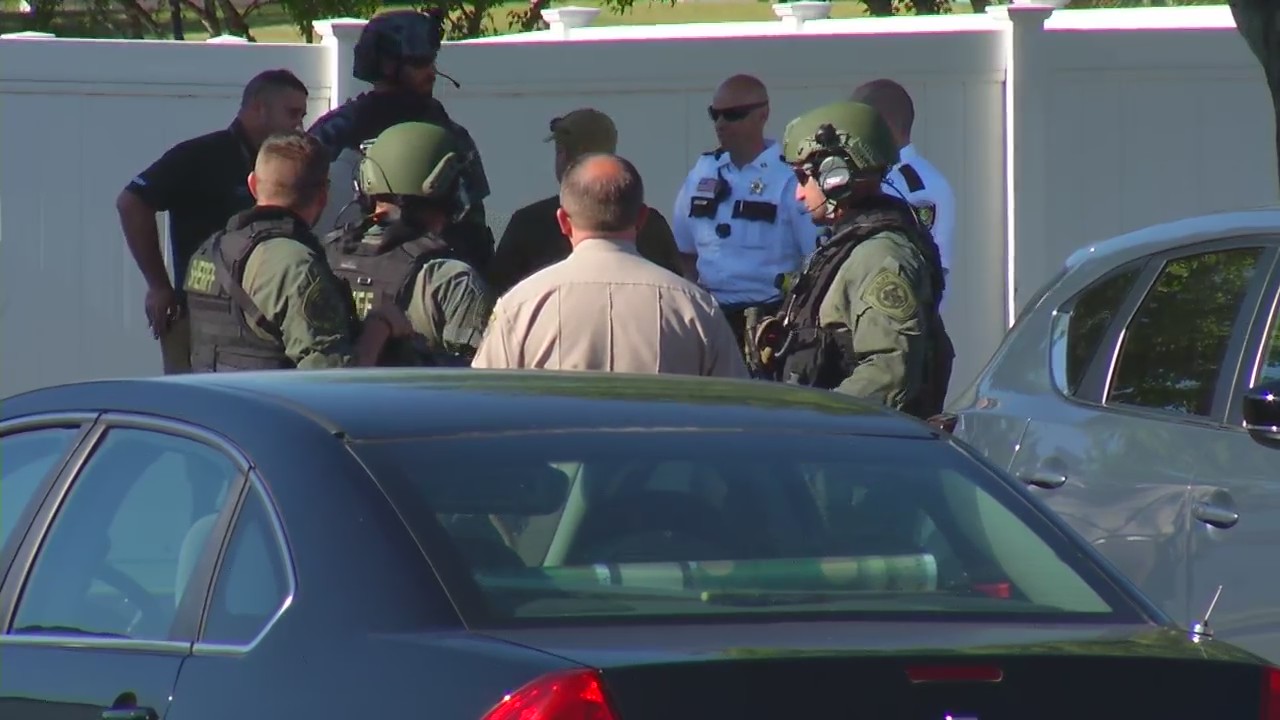 Law enforcement officials are at the scene of a standoff in St. Michael. (KSTP-TV)

Further information on the use-of-force incident will be released by the Minnesota Bureau of Criminal Apprehension.

Below is an earlier version of this report.

KSTP has team coverage today on the standoff in St. Michael that began early Tuesday around 12:30 a.m. Click the video player above to watch the latest reports.

In an update at 4 p.m., Wright County Sheriff Sean Deringer said Gardas remains hostile and is still firing gunshots at law enforcement. Fortunately, no injuries have been reported.

Some nearby homes are still evacuated as the standoff drags on. Officers were first called to the 500 block of Central Avenue shortly after 12:30 a.m. Tuesday.

“As long as he’s going to communicate with us, sporadic as it is, we’re going to continue to be here for as long as we can to try to bring a peaceful resolution to this situation,” Deringer said Wednesday afternoon.

“I hope the current situation in St. Michael ends peacefully. Gardas is not allowed to possess guns and he’s aware of that. His continued disregard of the law is disturbing. It leads to dangerous situations like this and his complete lack of regard for law enforcement. It’s disappointing and jeopardizes his safety, his family and all the police officers doing their jobs, all because he won’t comply with the law and won’t turn himself in on his warrants.”

Below is an earlier version of this report.

UPDATE: Authorities have told residents who live near an active scene in St. Michael to evacuate due to what they say is “the volatile nature” of the incident, adding shots have been fired at law enforcement.

According to the Wright County Sheriff’s Office, deputies were called to the 500 block of Central Avenue West in the city of St. Michael for a report of a gun complaint Tuesday.

The person reporting the incident said a man and woman were arguing, and the man was carrying a rifle.

The man, identified by authorities as 39-year-old Brandon Gardas of St. Michael, is said to have active warrants for his arrest. Gardas is a convicted felon, and the warrants are for his arrest on various charges, including domestic assault and possession of a firearm.

Deputies have been trying to apprehend Gardas since Tuesday, and are still at the scene as of Wednesday morning.

Authorities say they have had several rounds fired at them, and are asking community members to stay away from the area.

Drivers on County Road 35 and other streets will also be re-routed due to public safety.

A criminal complaint states deputies responded to Gardas’ home along Central Avenue West shortly after 1 a.m. on August 11, 2020 on a report of a domestic assault. Deputies reportedly found a woman with bruises at the home who said she had been pinned down and her phone was taken away. The woman said Gardas wasn’t home when deputies arrived and said she didn’t know where he was.

A responding deputy, according to the complaint, had had previous contact at the home, and reported knowledge of the family owning “an arsenal of firearms.” As the home was cleared, deputies found a long hallway that led to a backroom, described as a ‘dooms day’ room in court records. Inside the room, law enforcement found hundreds of rounds of ammunition, soft body armor and door breaching equipment, the complaint states. The woman said she had tried to unlock a gun safe, but was unable to, saying Gardas “must have changed the code.”

The complaint states that Gardas was convicted in 2004 of third-degree controlled substance possession, which made him ineligible to possess firearms or ammunition.

Over a year later, another complaint was filed, charging Gardas with possessing a firearm and ammunition as a felon, as well as fleeing police.

Deputies who knew Gardas had an outstanding felony warrant saw him on October 11, 2021 at the front step of the Gardas home along Central Avenue West.

According to the complaint, Gardas’ wife communicated with him, as he was locked inside a bedroom, and helped with negotiations before eventually unlocking the door.

Deputies say they found Gardas sitting on the floor behind the bed, adding he put both hands up to show he didn’t have a weapon, but as a deputy approached him, Gardas then allegedly moved his hands out of view and towards the ground, causing a deputy to draw his firearm. Gardas then was forced on the bed, and handcuffed. Deputies found a handgun holster near his right side, as well as a loaded homemade Glock style 9mm handgun with an extended magazine under the bed.

Deputies say there were nearly two dozen rounds of hollow-point 9mm ammunition found, including the chambered round and the rounds in the magazine.

Additionally, the complaint states the gun didn’t have a serial number, with deputies saying the bottom half had a grip and trigger that appeared to be a pre-made pistol frame, while the slide and rail appeared to be from a Glock, but no serial number. Documents say after dry-firing the gun at the sheriff’s office, the weapon fired as a normal Glock would.

This spring, the school reported one of the juveniles had “not been in attendance for quite some time.” In response, the sheriff’s office told school staff not to go to the family residence without law enforcement because “the entire family is anti-government” and “it is very likely that a dangerous situation at the residence could quickly escalate.”

Wednesday, online records show Gardas’ wife, 37-year-old Chelsea Gardas, is in custody and is being held on a charge of aiding an offender to avoid arrest.

Updates will be given as more information becomes available. Make sure to refresh your page to make sure you’re seeing the most recent report.

INITIAL REPORT: 5 EYEWITNESS NEWS is tracking an apparent standoff in St. Michael, where authorities have been stationed since at least 9:30 Tuesday night.

Authorities have set up a command center on Kady Avenue. Multiple agencies are at the scene.

A 5 EYEWITNESS NEWS photographer reported hearing what is believed to be a gunshot while monitoring the situation overnight.

With little information available at this time, some neighbors have expressed worry.

Check back for updates as 5 EYEWITNESS NEWS works to learn more from Wright County officials.