St. Louis Park homeowner Dimi Lalos spent time in his basement Saturday, showing us how high the water got.

Five inches on Friday night — and 16 inches two weeks ago.

“At about 11:30 I woke up to the sound of water, I thought it was our water softener doing a refresh cycle,” he recalls. “So I went downstairs and found that we have about five inches of water in our basement, up to the very first step in our basement.”

For Lalos and other homeowners off Minnetonka Boulevard, this was no refresh cycle.

It was a water main break, followed by sewage backup that flooded basements — the second such incident in two weeks. 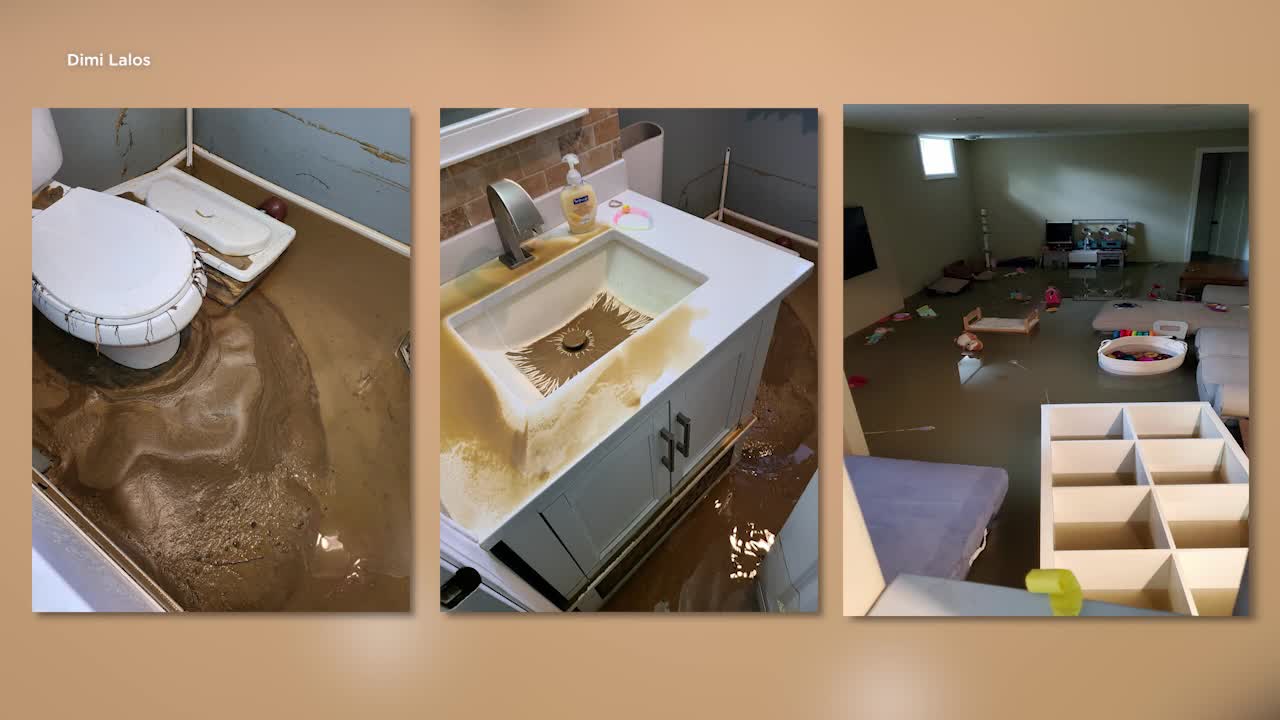 “Unbelievable,” declared Susan Boen — who moved into her house in 2015. “We were just in shock. Couldn’t believe it was happening a second time.”

On May 21 — exactly two weeks ago, a 12-inch water main ruptured at Texas and Sumter Avenues.

A city spokesperson says up to 56 homes were affected by the flooding.

“It was 1.1-million gallons, they said at the city meeting after the first break,” said Telly Pappas, who owns two commercial properties along Minnetonka Boulevard. “I don’t know what it was this time. I’m sure it was hundreds of thousands. It was longer the first time.”

Friday night, there was a second break in the same general location.

A city spokesperson says the causes of both breaks are being investigated.

The main itself is 66 years old.

This time, it’s unclear how many homes are flooded — but Boen’s is one of them.

“Just got my basement cleaned Thursday and was starting to relax a little bit,” she explains. “I think, okay, I can kind of stop this, instead of being in shock.”

The break this time triggered a sinkhole — some nearby sidewalks have also buckled.

Just up the street, the basement of one of Pappas’s properties is covered in mud, left behind after the flooding.

“No standing water — standing mud sludge,” he says ruefully. “I went downstairs, and I probably had 18 to 20 inches (of water) and mud, slush-type residue.”

Pappas estimates $150,000 worth of dental equipment and electronics is destroyed.

He says an emergency reimbursement fund approved by the city council after the first water main break — about $30,000 per household, may not be enough for some homeowners.

The League of Minnesota Cities Insurance Trust says some homeowners may be eligible for up to $40,000 per household — and that there is a $2-million cap per occurrence.

“They did say they’re going to have partial coverage for you,” Pappas says. “But you know, 30 to 40 grand doesn’t cover the two cleanups. What they are going to do this time, I don’t know.”

Some city staffers went door-to-door Saturday, to check on the extent of damage.

An online city advisory told residents “We can’t express how terribly we feel that this situation has happened for the second time.”

The city is urging residents with property damage to file an initial claim with their homeowners or property insurance.

For his part, Lalos says he’s already facing a total of $130,000 in repair and replacement costs.

“We had a new furnace installed and a water heater,” he says. “Sump pump, washer-dryer. All in the last week, so we could actually live in the house… and now, to have this happen, it’s tough to figure what the next steps are.”

A city spokesperson says repairs are ongoing — that the affected section of Minnetonka Boulevard will be closed to traffic through the weekend.

She says Monday night at 6:30, the St. Louis Park City council will discuss the May 21 water main break and options for impacted residents.

He says his family moved into their home less than a month before the May water main break.

Lalos says they are heartbroken, because they considered this their dream home.

But maybe not anymore.

“At this point I want to fight because it is so frustrating,” Lalos says. “Both my wife and I have asked ourselves, and each other, do we want to live here still.”

The city says residents who have damage that hasn’t been reported can email watermainoutreach@stlouispark.org or call 952-924-2562.