It’s an unlikely pairing — face masks and suitcases. But Willy Van Dooijeweert says that combination has saved his Roseville luggage shop Urban Traveler from going under.

Van Dooijeweert says the addition of face masks and personal protective equipment to his inventory was a pandemic pivot that’s made a huge difference.

"We had to reinvent ourselves and find out how people are living in this pandemic, and they have different needs, different changing needs,” he says.

March of 2020 was a hard month for Van Dooijeweert and his six employees. He says the ban on international travel and the shutdown that followed squeezed his business from a thousand customers a month to just a few a day. 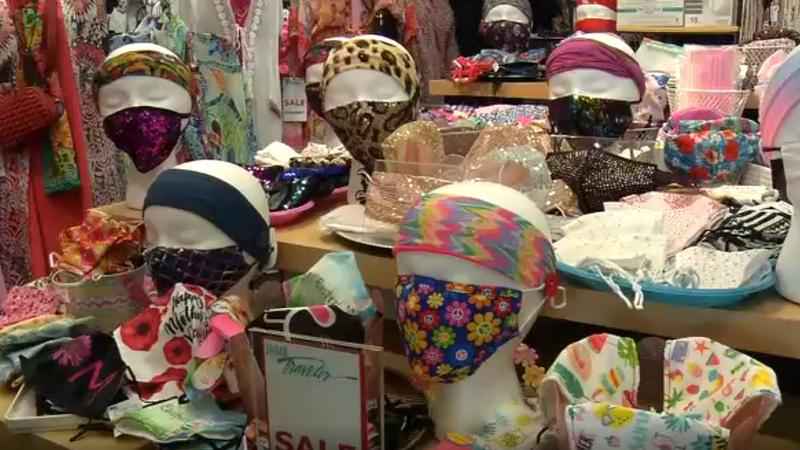 “It was really scary,” he said. “We had worked on it for 35 years and being up here, a thriving, profitable business. All of a sudden, almost zero.”

Van Dooijeweert says potential customers who did come in wanted masks and hand sanitizer, not luggage. He says he spent the shutdown networking with contacts he had made during the three previous decades.

Van Dooijeweert says it was a lot of work. Now, more than a year later, 60% of his business comes from selling masks and PPE products. Making that sharp turn isn’t always easy.

"We started this company 15 years ago, and I thought this is going to be my last job, this is great!" Dorwart said.

Before the pandemic, Dorwart says his business was thriving. He had 45 employees catering 300-seat weddings and banquets.

But when the pandemic hit, “It went up in smoke, like instantly,” Dorwart said. “We got calls instantly, and emails instantly, about people rescheduling, canceling, all that sort of stuff.”

In the months that followed, the company was forced to cancel 100 events. In April, his team switched to making meal kits to go. It wasn’t an easy transition.

“We relied on our client base and sent out emails and said, hey, we will deliver a cool meal for you, whether it’s for four or six or eight or 10. This is the menu. Order it, and we will drive it to your house and drop it off,” Dorwart said. “But it’s not what we do, right? Like we like to cater at events. We like to bring people amazing food to their weddings and their corporate events.”

He had to furlough 39 employees that month, some of whom he’d worked with for a decade or more.

“So then we were on life support again for the next three months,” Dorwart said.

Then, in September, he had to fire his furloughed employees. Two days before closing for good, a culinary miracle transpired.

"We got a call from Minnesota Central Kitchen that said, ‘Hey, can you make a couple thousand meals a week for us and will that help you guys stay in business,’” Dorwart said. “At least keep a couple of people employed with benefits and that sort of thing, and it was a lifeline, a godsend, call it what you want.”

“So now our paradigm has shifted completely, or pivoted to use the word,” Dorwart said. “So now we’re doing Minnesota Central Kitchen, we’re doing our meal kit delivery.”

“Keeping the kitchen revitalized and keep the kitchen, wanting to make great food and keep people happy, you know,” he said.

Now, more than a year since the pandemic began, things seem to be looking up.

"We’ve lost 416,000 jobs since the pandemic started. We’ve gained about 203,000, so we’re about halfway back,” said Steve Grove, commissioner of the Minnesota Department of Employment and Economic Development. "It’s been an amazing thing to see businesses across the state adapt to this pandemic and find new ways to create revenue for workers and for the state."

Right now, DEED isn’t tracking specific numbers of businesses that have changed course. Grove points to the 32,000 new business applications submitted to the state in the second half of 2020. That’s a 41% increase from the year before, he says.

Grove says that’s a sign that businesses are reinventing themselves or are starting new ventures.

"It’s a whole new customer base they’ve been able to access, just by pivoting their business model and making something new, something that people need, “ he said. “And that kind of frenzied uptick in new business starts is really good for the economy. It creates new jobs, it creates more opportunities, it creates a lot of innovation."

Dorwart says even with the lifting of some COVID-19 restrictions, he doesn’t expect to be catering large-scale events for a while yet. But he says he’s proud to be providing food for hundreds of people in need every week.

“I’m not real comfortable going in and hanging out with 350 people, elbow to elbow, and I don’t think a lot of people are,” he said. “But we’re still here. That’s the biggest thing. We’re feeding, you know, 1,800 needy people a week, and we’re feeding our old clients and old friends, and new clients and new friends.”

For his part, Van Dooijeweert says, in just the last few weeks, his business has been picking up from customers who say they are willing to travel again.

“If you can have your mind open to different products and different categories and think outside the box … there is definitely still the possibility to survive, and we are an example of that,” he said.