8 p.m. — Three tornado warnings are active in Morrison County, one of which includes part of northern Benton County.

A severe thunderstorm warning is active for an area that includes the western Twin Cities metro. Winds are forecast to reach 60 mph, and 0.75-inch hail is possible as well.

7:16 p.m. — A tornado watch has been expanded to include the Twin Cities metro area. The alert is in effect through midnight.

6:50 p.m. — Traverse and Big Stone counties along the Minnesota-South Dakota border are under a tornado warning through 7 p.m.

Separate tornado warnings are in effect until 7 p.m. for parts of Pope, Swift, Kandiyohi and Renville counties in west-central Minnesota.

6:30 p.m. — A tornado watch has been issued through 10 p.m. for much of western and central Minnesota, and a severe thunderstorm watch is in effect for the state’s southwest corner.

Damaging winds are of particular concern with this storm system. According to KSTP Meteorologist Wren Clair, winds could reach speeds of 90 mph.

The National Weather Service (NWS) says the entire state of Minnesota is at risk of seeing severe weather Thursday, but depending where you live, your risk of seeing it may be much higher than other spots.

According to the NWS Storm Prediction Center (SPC), part of the state (from Fargo south to just north of the Minnesota and Iowa border) is in a “Moderate” risk. That area stretches east to roughly halfway between Alexandria and St. Cloud. 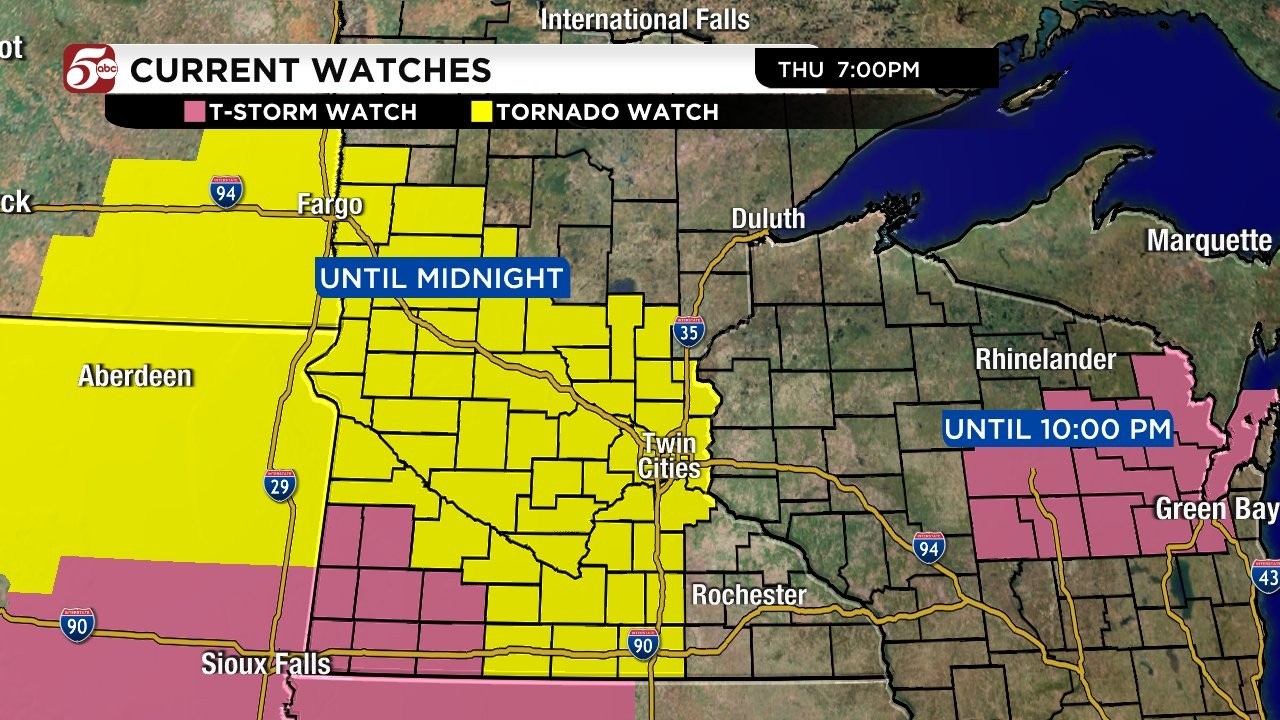 Surrounding that is the “Enhanced” risk. That area covers the Minnesota/North Dakota border to Bemidji, stretches south to Hinckley and St. Paul, before curving just to the west of Albert Lea, and includes Worthington.

The rest of the state, as well as northwest Wisconsin, falls under a “Slight” risk.

The risk is for a storm system that will move across western Minnesota and could bring wind damage, large hail and possibly tornadoes.

According to 5 EYEWITNESS NEWS Meteorologist Jonathan Yuhas, severe storms will redevelop Thursday afternoon in eastern North and South Dakota, and then go into western Minnesota after 6 p.m. Those storms will include a threat of tornadoes and winds of more than 80 mph.

The storms will approach the Twin Cities area after 10 p.m., according to Yuhas, but will lower in intensity as they enter eastern Minnesota and western Wisconsin, with the biggest risks being 60 mph winds and heavy downpours that could cause flooding. The strongest storms are expected to be in a line from Detroit Lakes to Alexandria, Willmar, Redwood Falls, Worthington and west to the border of both North and South Dakota.

Yuhas says storms early in the afternoon will likely graze areas in the north metro, mainly along a line from Rogers to Coon Rapids to Forest Lake and north until 2 p.m. After that, heat and humidity will build.

A Severe Thunderstorm Watch has been issued for parts of eastern Minnesota, as well as part of northwest Wisconsin. That watch is in effect until 5 p.m.

Storms that rolled through central Minnesota Thursday morning caused large hail to fall, in some places, it was up to two inches in size.

Cleanup is underway after powerful, widespread storms moved through the state Wednesday evening.

The storms left thousands without power — at one point, Xcel Energy reported more than 72,000 customers across Minnesota lost power as of 9 p.m. Wednesday. That number was down to around 24,600 customers as of 12 p.m. Thursday.

As previously reported, Wednesday’s storms also caused the Minnesota Twins to suspend its game with the Astros after three innings. Minnesota United also postponed its game to 1 p.m. Thursday. 5 EYEWITNESS NEWS will have updates on those games Thursday evening.

Stay with 5 EYEWITNESS NEWS for the latest weather updates. You can also follow meteorologists Matt Serwe, Jonathan Yuhas, Wren Clair and Ken Barlow on Twitter and Facebook for updates:

A complete guide to severe weather can be found by CLICKING HERE.