Friday morning, jurors heard from Sgt. Mychal Johnson, who was the patrol sergeant that responded to assist Potter and Officer Anthony Luckey with Wright’s traffic stop. He’s since left the Brooklyn Center Police Department and now works for the Goodhue County Sheriff’s Office.

In addition to seeing Johnson’s body and dash camera videos from that day, jurors heard Johnson explain what he was doing during the traffic stop. He explained that he reached into the car when Wright was struggling with Luckey to make sure the car was turned off and ensure Wright couldn’t shift the car and drive away. He noted he grabbed Wright’s right arm to prevent him from operating the car before Potter fired and that his feet were always on the ground outside.

The defense tried to portray him as being in danger of being dragged by Wright’s car and seriously injured or killed; the state noted he was holding onto the inside of the vehicle while his feet were on the ground outside, and he was ready to quickly stand up as he did after Potter fired her gun and before the car sped off.

Johnson explained how, after the shooting, he took Potter’s gun and gave her his weapon to preserve her gun for evidence. He also said he later took the ammunition out of the gun he’d given Potter after an officer was concerned she’d harm herself. 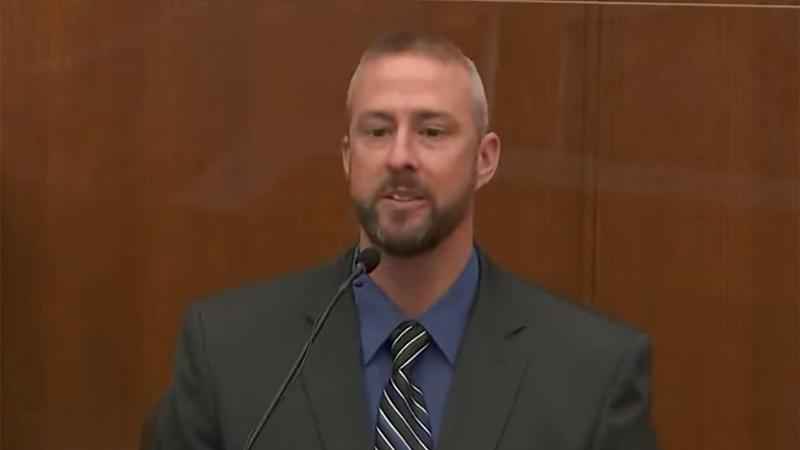 In this screen grab from video, Mychal Johnson, former patrol sergeant at the Brooklyn Center Police Department, testifies as Hennepin County Judge Regina Chu presides over court Friday, Dec. 10, 2021, in the trial of former Brooklyn Center police Officer Kim Potter at the Hennepin County Courthouse in Minneapolis, Minn. Potter is charged with first- and second-degree manslaughter in the April 11 shooting of Wright, a 20-year-old Black motorist, following a traffic stop in the Minneapolis suburb of Brooklyn Center.[Court TV, via AP, Pool]

In portions of Johnson’s bodycam video after the shooting, Potter could be heard saying, "Oh God, what have I done? What have I done?" and "I don’t know what happened." While his video played in court, Potter shook and cried, putting her head in her hands at times. Wright’s mother, Katie Bryant, was also in court and cried quietly during the video.

In the afternoon, Acting Brooklyn Center Police Chief Tony Gruenig explained his role as a commander on April 11 and confirmed the Minnesota Bureau of Criminal Apprehension was called to investigate the shooting. BCA Assistant Special Agent in Charge Charles Michael Phill, who was the agent called, then described the BCA’s role in responding and collecting evidence from the scene.

Before Judge Chu and attorneys for both sides discussed autopsy pictures, Chu adjourned court for the day at 2:37 p.m. due to the inclement weather.

Court is scheduled to reconvene Monday at 9 a.m.