Crews worked Monday to make security improvements to government buildings ahead of the trial of Derek Chauvin.

Chauvin, a former Minneapolis police officer, has been charged in the death of George Floyd.

Chauvin’s trial is scheduled to being in two weeks in a courtroom at the Hennepin County Government Center. It is estimated the trial could last through mid-April.

Hennepin County Board Chair Marion Greene says the barricades and security fencing are an unsettling sight to see but said they are needed.

"We want to make sure that it’s understood in the community that what we are working to do is preserve safety for those involved in the trial to ensure that the trial can proceed without any hindrance or disruption,” Greene said. “But that we are in no way aiming to interfere with freedom of expression or freedom of speech."

On Monday, crews could be seen putting up plywood over windows outside a high-rise building across from Government Plaza.

"There’s uncertainty about what the trial is going to bring," said Steve Cramer, president and CEO of the Minneapolis Downtown Council. "A lot of preparation has gone into making sure that people can peacefully protest but not cross the line to damage and affecting people’s livelihoods."

Cramer said a number of businesses plan to stay open during the trial.

"We’ve never seen a trial like this," Cramer said. 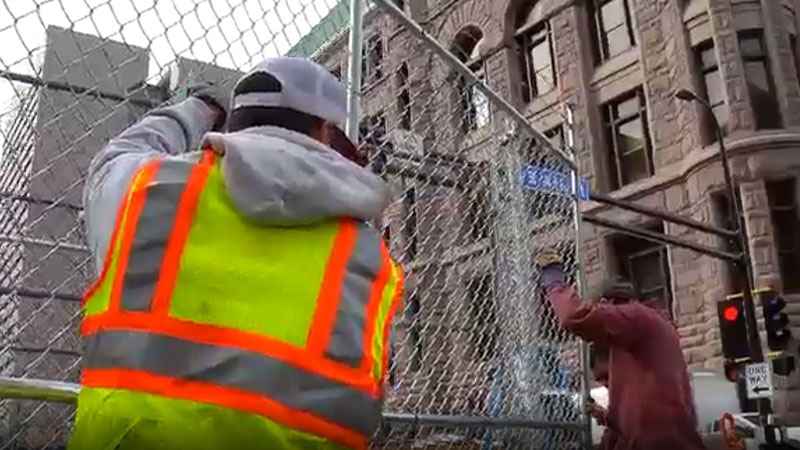 Minnesota Gov. Tim Walz on Monday wrote lawmakers asking them to pass special funding that can be used by communities during public safety events, which could include public safety funding for the Chauvin trial.

"With only 14 days until the start of the Chauvin trial, my administration and our local partners must turn our full attention to implementing the unified command plans established between Minneapolis, Saint Paul, Hennepin County, Ramsey County, state law enforcement, the National Guard, and other jurisdictions,” Walz wrote in letter. “Our top priority is to preserve First Amendment rights to peacefully demonstrate, while protecting lives, public safety and property during this historic time.”