During this pandemic, an increasing number of people are facing food insecurity. Second Harvest Heartland says COVID-19 has undone a decade’s worth of progress in the fight against hunger.

Inside the organization’s Brooklyn Park headquarters, stacks of packaged food and essentials are stacked high. Volunteers have been assembling emergency food boxes, which are ready to go out to families in need.

Currently, one in nine Minnesotans are dealing with food insecurity. One in six Minnesota children are facing hunger.

“If you think about your child’s classroom, if they’re in-person or on Zoom, there’s probably a few kids in those classrooms that are experiencing hunger,” said Rachel Sosnowchik, a Second Harvest Heartland public affairs specialist. “It’s someone waiting in line at the grocery store with you that is scrounging and saving and trying to stretch their grocery budget as far as they can.” 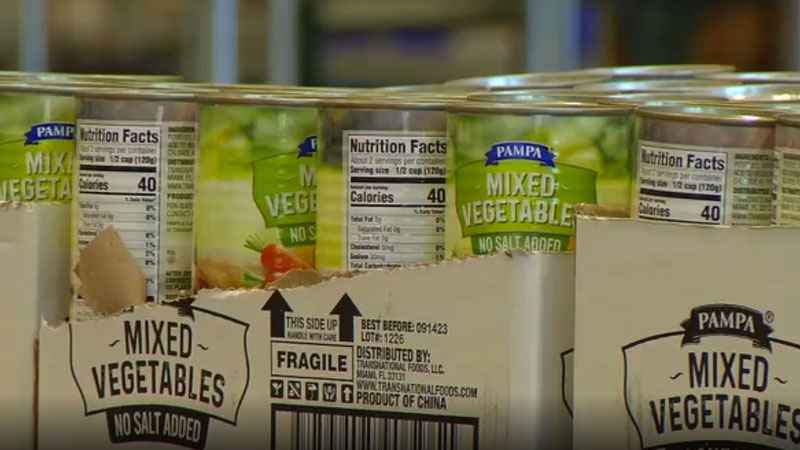 “People who may have lost their job back in March and April and haven’t been re-employed since, or have faced reduced hours and are only working part-time when they used to work full time,” she said. “Maybe parents who used to work and are taking the time now to take on additional caretaking responsibilities with kids being at home.”

Distance learning has also made the internet a necessity, she said, plus there are higher heating bills in the winter.

“What we know is your food budget is often the first thing that goes, or is reduced, when all of these other costs are adding up so people are making these really tough decisions,” Sosnowchik said.

A bill has been introduced in the Minnesota House to help food banks continue to address the growing need.

“I’m passionate about this because I grew up hungry,” said Rep. Jessica Hanson, who introduced HF 790. “My parents worked hard and were responsible people but we didn’t always know where our food was coming from.”

The legislation would provide an extra $2.5 million dollars for the Farm to Foodshelf program over the next two years. The additional amount would bring the total funding for the program up to about $5.9 million.

Through the program, food banks work with farmers to get local milk and produce.

“The produce grant allows farmers to donate produce what would otherwise go unharvest or unsold, it’s a clear win-win,” said Second Harvest Heartland CEO Allison O’Toole, during a hearing on the bill Monday. “A member of our team at Second Harvest Heartland sourcing team works with farmers to coordinate produce donations and our finance team manages the invoices and reimburses the cost farmers incur in harvesting and transporting the produce.”

O’Toole said they’ve sourced about seven million pounds of Minnesota produce every year since it started in 2015. They’ve been able to provide 25 different varieties of fruit and vegetables from 120 different growers across state, reaching people in all 87 counties.

They’ve also been able to acquire hundreds of thousands of gallons of milk.

In April, she said the Legislature provided one-time funding to increase the amount of milk available and add protein to the program, like meats, cheeses and eggs.

“It was a just-in-time delivery of support for this vital program and enabled food banks to ramp up our protein sourcing at a time when the need was at historic levels,” O’Toole said. “That need continues.”

HF 790 would make protein a permanent part of the program and allow them to continue delivering a higher amount of milk.

Sosnowchik said they’re hopeful the additional funding is passed by the Legislature.

“I think what it means for us and for our food shelf partners, and ultimately the families we serve, is having a greater source of healthy, nutritious food, being able to provide a quality meal for your family, having at least one thing that can feel more stable and certain when everything else is hectic and chaotic,” she said. “I think the power of having food, a pantry full of food is really can’t be overstated.”

Second Harvest Heartland has pivoted throughout the pandemic. They’ve been providing large, mobile distributions of food. Families and individuals can drive up to an emergency pop-up grocery and have food loaded into their trunk. The organization has also been doing food box distributions as well.

The Minnesota Central Kitchen initiative has also allowed them to provide prepared meals.

“I think we’re 11 months into this and a vaccine is here and is being rolled out but the vaccine isn’t going to solve hunger and for a lot of our neighbors, the light at the end of the tunnel is very far away,” Sosnowchik said. “I hope that anyone who maybe has been struggling over this last year has considered asking for help …There are so many people who want to help, I hope folks will ask.”