A quick text message from Minnesota Attorney General Keith Ellison got his prosecution team back to the Hennepin County Government Center Tuesday afternoon as the jury was about to return their verdicts in the Derek Chauvin murder trial.

"The longest period time to wait was when we went into the courtroom," Ellison said. "We just sat there. It seemed like hours… it was only 30 minutes."

Also in the Minneapolis courtroom was prosecutor Steve Schleicher, who tried a significant amount of the case for the state.

"Given the speed with which they came back, I was expecting it was going to be a verdict we would be OK with," Schleicher said.

Nearly 10 hours of deliberation, the jury returned guilty verdicts on all three counts against the former Minneapolis police officer in the death of George Floyd.

"Fortunate enough to be in this moment and in this space to play a role in helping justice happen,” Ellison said. “To me, that’s a privilege … That’s a blessing.”

"I just felt this overwhelming feeling of gratitude and satisfaction," Schleicher said.

Schleicher said those feelings sunk in when he looked at Philonise Floyd, the brother of George Floyd, seated in court.

"I felt so happy to be able to look at him and know we did what we were supposed to do," Schleicher said.

Quite often, lawyers will look to the jury to gauge their faces or body language to see how their case is progressing. But in the Chauvin trial, the jury wore masks due to COVID-19 restrictions. 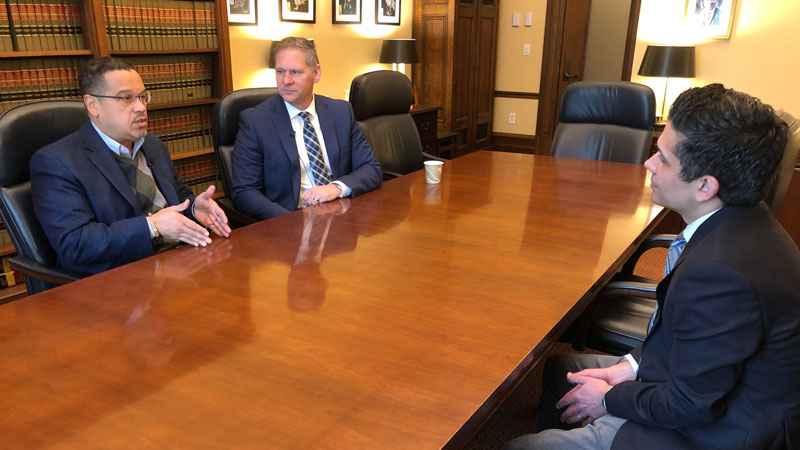 "I was looking for particular attitudes,” Schleicher said. “We have to have people who are going to allow themselves to hear our message. I thought through the questioning this was a truly open jury."

During the trial, several police officers, including Minneapolis Police Chief Medaria Arradondo, called out Chauvin’s actions from the stand. Schleicher said he felt those moments were definitely noticed by the jury.

"I could tell they found that testimony important," Schleicher said. "It just carried a great credibility. I thought he did a fantastic job."

Ellison echoed the importance of the law enforcement members who testified during the trial.

Chauvin invoked his Fifth Amendment right to not testify during the trial.

5 EYEWITNESS NEWS asked Schleicher about not being able to question the man at the center of the case.

“I was prepared to question him, I had prepared a lot," Schleicher said. "So when that didn’t happen, I guess I can’t say disappointed. I don’t know how to answer that.”

Chauvin’s scheduled to be sentenced on June 16.

"This case was about the behavior and actions of one defendant, but what the community is crying for is a better relation between community and policing," Ellison said.

Prosecutors declined to comment which members of the team will handle the trial of the three other former officers charged in Floyd’s death. Thomas Lane, Tou Thao and J Alexander Kueng are expected to be tried in August