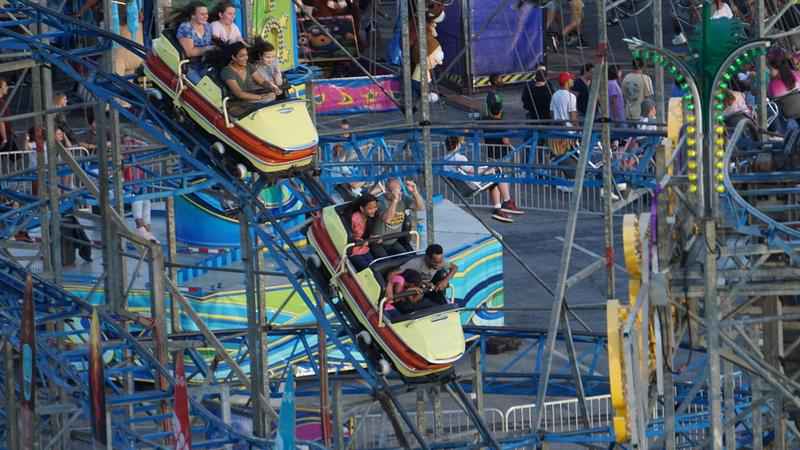 A new roller coaster reaching heights of 55 feet, called the Riptide, is planned for the Mighty Midway.[Minnesota State Fair]

In terms of new rides, a new roller coaster reaching heights of 55 feet, called the Riptide, is planned for the Mighty Midway, organizers said. Meanwhile, the fair’s Adventure Park will now be located along the south side of Judson Avenue, between the CHS Miracle of Birth Center and the Dairy Building.

For those looking for some art, local artists are painting 10 large-scale pieces of art that reflect the world in which they want to live. During the fair’s 12 days, those artists will be on-site, creating their art.

The so-called Joyful World Mural Park will be located on the west side of Chambers Street, between West Dan Patch and Carnes avenues.

Also, there’s a new competition featuring those who made art using their "Crop Art to Go" kits from 2020.

The deadline to register for the new competition is Aug. 13 and the art will be displayed in the Agriculture Horticulture Building.

For those interested in agriculture, fair visitors will be able to see restored tractors and new agricultural project exhibits via the Agriculture Horticulture Building. Additionally, the iconic Cattle Barn is celebrating 100 years with an educational exhibit and photo opportunity this year.

This year, the fair will also host the prestigious Central Regional Finals exhibition, which brings together draft horse hitches from 12 states and central Canada. It will be held at 3 p.m. Thursday, Aug. 26.

There will also be a skin cancer education and screening program offered along Underwood Street, north of Murphy Avenue and east of the Pet Pavilions.

For those planning in advance, there’s a new section on the state fair website that details what’s new at the 2021 fair and will provide updates.

Additional information on new attractions this year can be found here.