It’s known around the world as George Floyd Square.

The intersection of East 38th Street and Chicago Avenue South in Minneapolis is where George Floyd spent his final moments as former Minneapolis police officer Derek Chauvin knelt on his neck.

Currently, it’s blocked with barricades while community activists preserve the area as a place for people to honor the life of Floyd. For them, and some who live near George Floyd Square, it is now a sacred space.

Hill-Kipling and her family moved just a block away from the intersection in April 2020. Within weeks, Floyd was killed. As mentioned, they appreciate the space and even volunteer to help preserve the artwork. 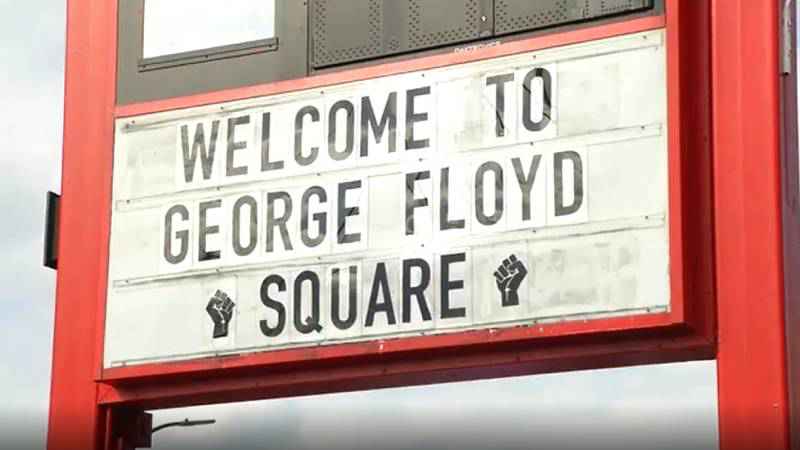 However, some of Hill-Kipling’s neighbors feel differently.

From being threatened with violence for sharing their negative opinion about the situation to their homes getting hit with gunfire, those who feel George Floyd Square is now doing more bad than good want the road opened back up.

Over the course of the year, Minneapolis city officials — including Minneapolis Police Chief Medaria Arradondo — have shared their own frustrations. Arradondo at one point called the situation “unacceptable” when referring to the violence and atmosphere of the area.

38th and Chicago is still closed a year after George Floyd’s death. Where does Minneapolis go from here?

Last summer, 5 EYEWITNESS NEWS was able to obtain an internal police report describing officers being threatened while responding to call in the area.

One frustrated and fearful resident who lives close to the square spoke to KSTP but didn’t share her name. She also only allowed us to record her voice, as she didn’t want her home or family to become targets.

“[It’s] very frustrating,” she said. “My son hasn’t been able to come out and play, not just because of COVID, but gunfire can happen at any time.”

“For a month and a half last summer, I sent [my son] out of town for his safety," she said. "And I know I have a neighbor up the block did the same thing with her kids."

She added, “I don’t know how much longer I can stay.”

KSTP connected with others who have the same feelings. Sharing similar concerns about retaliation, they did not want to share their names or comment for the story. All support the cause but said it’s time to open it back up.

"I do believe that we should re-connect GFS and begin the important work designing a worthy memorial to broadly honor Social Justice and those who have died at the hands of the state, and specifically George Floyd. This work includes employment training, developing affordable housing, and supporting Black and Brown owned small businesses. This work needs to happen in conjunction with community as soon as possible."

Mayor Jacob Frey and City Council President Lisa Bender support reopening, but neither commented about what that would look like.

Who has final say on the matter is a bit complicated. In short, Minneapolis city attorney Jim Rowader stated in January of this year there’s not one entity in charge of the future of 38th and Chicago. But he did state whatever the plan is, there needs to be some sort of voiced consensus among elected leadership.

"What happened at 38th and Chicago last May to George Floyd was a tragedy and it deeply affected each and every elected official, department, and citizen in Minneapolis. In short, it has touched our entire Minneapolis community and has spurred all of us to action in order to ensure that such a tragedy does not happen again in our city.

"With regard to the future of the intersection of 38th and Chicago and the community surrounding it, everyone in city government needs to play a role given the enormity of this context. The Charter, nor any city ordinance, does not decree that one entity, department, officeholder or staff member has the primary or sole authority to mandate a future for 38th and Chicago. To be more specific, the City’s authority over the public right-of-way (ROW) is extensive and broad. Such vast authority is designed to facilitate travel. Without proper authorization (permit), any obstruction of the ROW is illegal. There are several Public Works-ROW ordinances, traffic ordinances, and traffic laws clearly on point. However, given the unique circumstances here, Public Works cannot reasonably be expected to act alone.

"In normal practice, the City Council does not specifically authorize or weigh in on each and every exercise of these powers by a City department. That would not be feasible or warranted in normal circumstances. Enforcement activity related to the ROW is conducted all the time at the discretion of several different City departments, including Public Works, Police, Regulatory Services, and City Attorney (criminal prosecution).

"So, while specific authorization from the City Council is not necessary for most enforcement efforts, the situation at 38th & Chicago is anomalous and is clearly unprecedented. To the extent City action is needed to open and maintain the ROW for its intended purpose (easement in favor of the general public for transit), it will necessarily involve a coordinated effort between multiple departments, including at a minimum, Public Works and Police. In addition, it will potentially require the assistance and intervention of non-City law enforcement, Public Works, or other similar agency partners, all of which may require City Council approval. It is also clearly not a police operation alone, such that the City Council can abdicate any responsibility. City code reflects this broadly delegated authority, but also states that the City Council (primarily in terms of its oversight over Public Works as primary stewards of the ROW) are where this power is rooted.

"As a result, when considering the potential consequences of any decision directly affecting the short term and long term future of 38th and Chicago, City department leadership reasonably feel that they must have the full support of the City, including all elected officials and community, before action is taken here. City enterprise support in this context would be reflective of some sort of voiced consensus among elected official leadership on the City Council and by the Mayor."

Meanwhile, the group that maintains George Floyd Square says it will not reopen until its demands are met.