Residents in Victoria rally together after deadly plane crash

The National Transportation Safety Board is still investigating a deadly plane crash in Victoria.

Law enforcement said everyone on board died when the small plane crashed into a home along Highway 5.

According to the ABC affiliate in Omaha, Nebraska, Dr. James Edney of Omaha and two of his family members were the victims.

The NTSB said there was no distress call prior to the crash and the plane was 10 miles from landing at Flying Could Air[ort in Eden Prarie.

Early information shows there were two pieces of the tail end of the plane that dropped off blocks away. Aviation officials say without it, you can’t steer the plane. 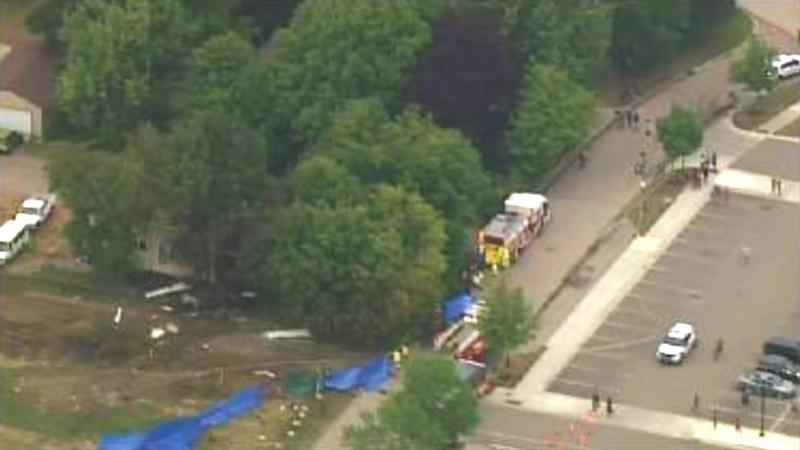 From the moment this crash happened, the Victoria community stepped up to help.

“In those moments you don’t have time to think, you’re just running on adrenaline,” Victoria resident, Ashlyn Powell, said.

One moment Ashlynn Powell was eating dinner at Winchester & Rye. The next – the unthinkable.

"I started running as fast as I could to the smoke,” she said.

Smoke was billowing into the sky after a plane crashed in downtown Victoria Saturday night.

“It was horrifying. All I can say it looked like a movie. It didn’t feel real,” Powell said.

Powell sprung into action. She grabbed a fire extinguisher and sprinted to the scene, which was steps away from the restaurant.

“I said ‘I’m certified is there anyone I can help?” Then I looked down and realized there was no help to be given,” she said. “It was awful what I saw and I wouldn’t wish it on anyone."

Police said no one survived the crash.

Officials said the plane took off from Alexandria municipal airport. It was headed to Flying Cloud Airport in Eden Prairie.

"It’s kind of nice to see the community come together under such a horrific thing,” Winchester & Rye owner, Kevin Heenie, said.

“We brought a couple dozen of cheeseburgers and fries over there just to try and help out,” Heenie said.

A community stepped up to help in the midst of tragedy.

“No one thinks a plane is going to fall out of the sky in a town like this,” he said.

“Life is short you have to cherish it. Thank god every day,” he said.

This crash is still an ongoing investigation.

The NTSB says an early report will be completed in two weeks. A full report won’t be ready until 12-18 months.