The U.S. Supreme Court is poised to strike down the landmark decision Roe v. Wade, which would overturn federal abortion rights in the country, according to a report.

Online website POLITICO.com on Monday night published what appears to be an authentic first draft of an opinion by Supreme Court Justice Samuel Alito that would overturn the 1973 Roe v. Wade ruling. 5 Eyewitness News has not independently confirmed the report.

“I’ve never heard of a situation in recent history where an opinion has been leaked,” Schultz said.

He added that it’s “exceedingly rare” for the Supreme Court to overturn one of its constitutional precedents. 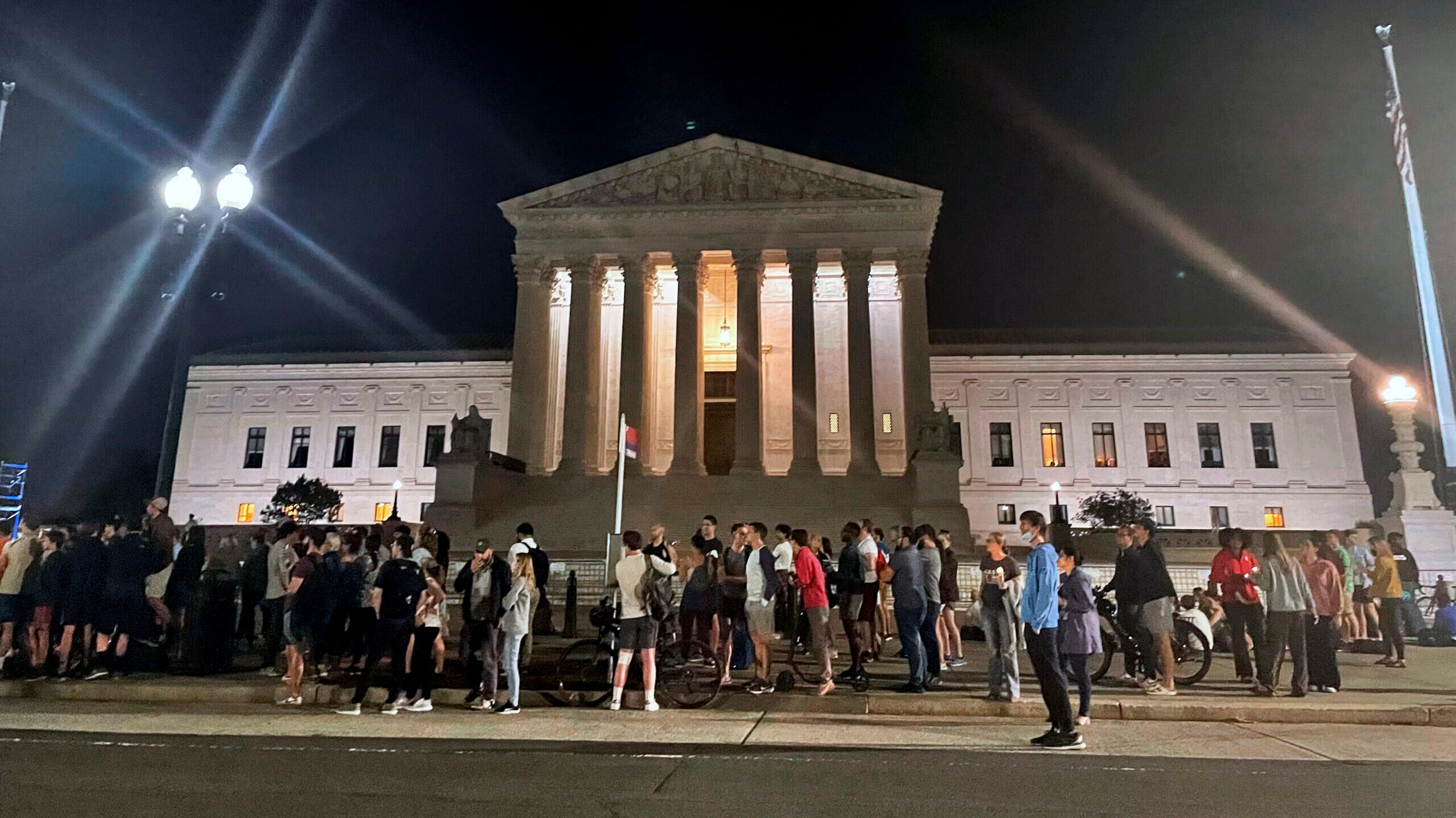 A crowd of people gather outside the Supreme Court, Monday night, May 2, 2022 in Washington. A draft opinion circulated among Supreme Court justices suggests that earlier this year a majority of them had thrown support behind overturning the 1973 case Roe v. Wade that legalized abortion nationwide, according to a report published Monday night in Politico. It’s unclear if the draft represents the court’s final word on the matter. The Associated Press could not immediately confirm the authenticity of the draft Politico posted, which if verified marks a shocking revelation of the high court’s secretive deliberation process, particularly before a case is formally decided. (AP Photo/Anna Johnson)

“This would be the first time in American history where they’re reversing a decision of their own, the Supreme Court is actually at this point now taking back a right, usually the court creates new rights, it doesn’t retrench them,” Schultz said.

While the reported 98-page draft does not make the court’s decision official, should the justices affirm the decision it would overturn the federal protection whenever the final decision was published by the court.

In the draft, Justice Samuel Alito writes, “Roe was egregiously wrong from the start. Its reasoning was exceptionally weak, and the decision has had damaging consequences. And far from bringing about a national settlement of the abortion issue, Roe and Casey have enflamed debate and deepened division.”

POLITICO reports that Republican-appointed justices Alito, Clarence Thomas, Neil Gorsuch, Brett Kavanaugh and Amy Coney Barrett voted in the majority to strike down Roe v. Wade, while Democratic-appointed justices Stephen Breyer, Sonia Sotomayor and Elena Kagan voted to uphold the law. Chief Justice John Roberts’s vote is unclear, and it’s also unknown whether he would join the majority or minority opinions or write his own.

The revelation comes as many states have rushed to pass legislation strengthening abortion bans or protecting abortion rights. However, by striking down Roe v. Wade, it could allow for lawmakers to create a federal ban on abortions.

“This sets up the possibility that also Congress could pass a law that basically would overturn any state law effectively that would allow for abortion.” Schultz says he doesn’t see that as likely with President Joe Biden in the White House, however, it could set up the possibility for a federal law prohibiting abortion in the future.

The nation’s highest court decided the landmark case in 1973, then largely reaffirmed the decision in 1992 in Planned Parenthood v. Casey.

After the leaked draft was published, Gov. Tim Walz tweeted that he’ll protect abortion rights while in office.

Lt. Gov. Peggy Flanagan also weighed in, calling abortion a “fundamental right” and urging citizens to “organize, vote, and fight like hell to protect our access to an abortion.”

This is a developing story. Stay with 5 EYEWITNESS NEWS for the latest updates on-air and online.