These are issues that prosecutors are required by law to share in future cases.

The Minnesota Department of Human Rights report into racial discrimination at MPD provided the public a rare look into how prosecutors keep tabs on officers that may not be trusted in court.

The report outlined multiple failures about credibility and accountability that are lacking at MPD.

One of the many key findings in the report is a quote from a high level MPD leader who says police “do not want to know which officers prosecutors determined are not credible” because of dishonesty. 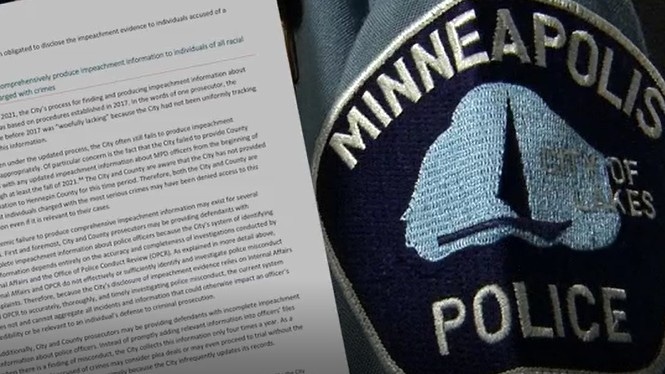 According to the report, the official added that they don’t believe information about an officer’s “credibility [and] integrity” is relevant for permanence management.

“There are certainly concerns and issues when you take Minneapolis Police at face value,” said defense attorney Eric Rice.

Rice said he has been frustrated with the process that MPD and prosecutors are relying on to share damning details about an officer’s past — known as Brady evidence.

The report out this week says “the city fails to produce” that information because it’s relying on an inadequate discipline system at MPD. It went on to say that “without substantial changes, problematic officers will continue to police the streets […] even though prosecutors have determined that these officers are not credible.”

“One thing that’s actually really hard to dispute is that Minneapolis has done a poor job disciplining officers who commit misconduct, and we can’t repair the relationship until we take that seriously,” said Rachel Moran, a law professor at the University of St. Thomas who has spent the last year studying Brady Lists.

On Friday, the Minneapolis City Attorney’s Office declined to make Jim Rowader available for an interview to respond to the report. The office also declined to release a statement.

5 INVESTIGATES reported on Thursday night that the Hennepin County Attorney’s Office is relying on the same process labeled a “systemic failure”.

The county said it is now working to improve collaboration and communication with the city to better track problematic officers.