Barbara Walters was that rarest of TV personalities: a cultural fixture.

For more than a half-century, she was on the air, placing in front of her audience world figures, big shots and celebrities whose names and faces might have changed from year to year. But hers never did.

She first found her way to prominence in a visually oriented business where, typically, women were adornments or otherwise secondary.

And there she stayed, stayed so long and reliably she came to serve as a trusted reference point: What Barbara thought, what she said and, especially, what she asked the people she interviewed.

“I do think about death,” she told The Associated Press in 2008 as she was closing out her eighth decade. But if death got the last word, Walters had the nation’s ear in the meantime, she made clear, with amusement, as she recalled the zany Broadway hit “Spamalot,” based on a Monty Python film. 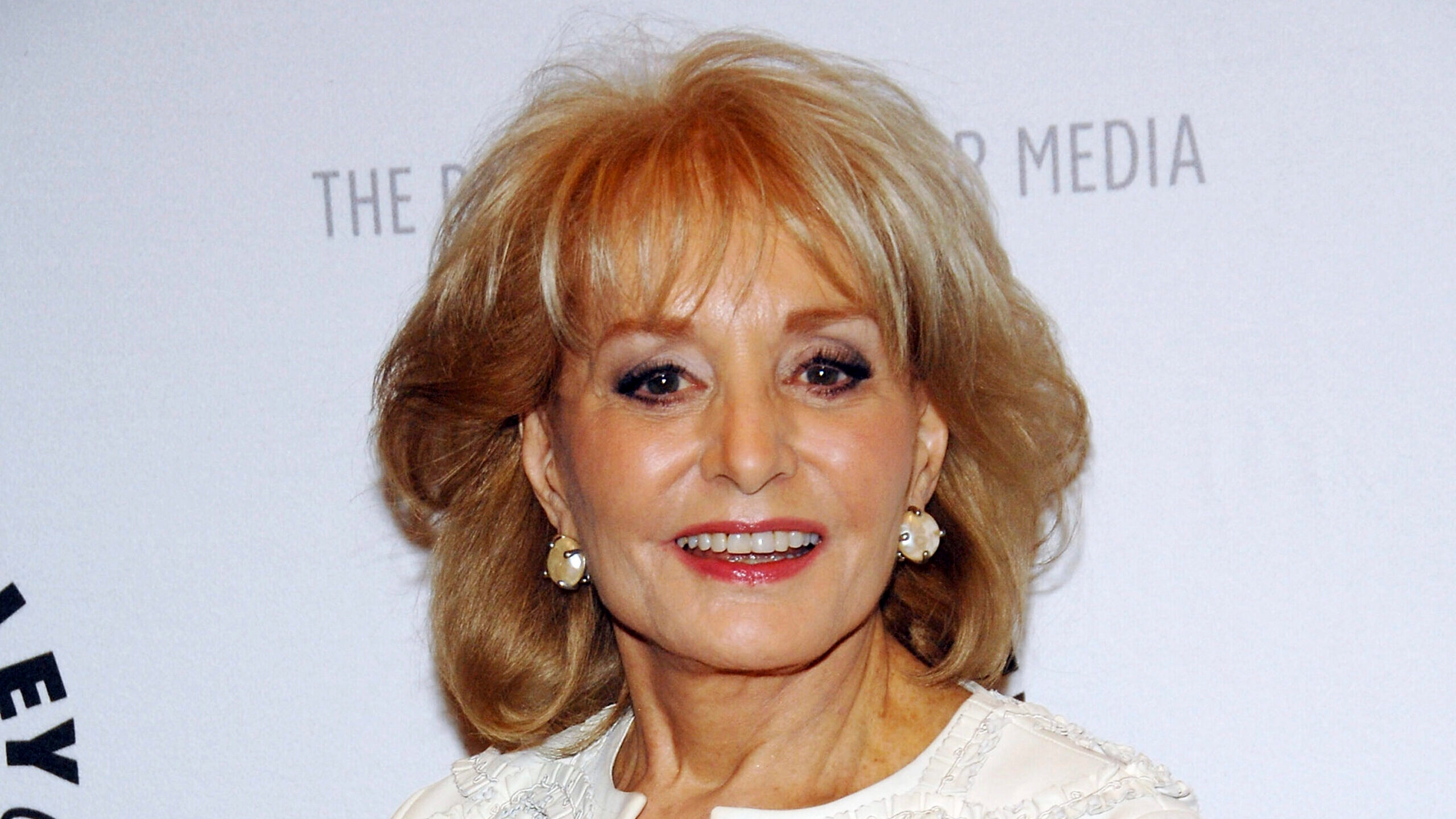 FILE - Barbara Walters arrives to participate in a panel discussion featuring the hosts of ABC's "The View," at The Paley Center for Media on April 9, 2008, in New York. Walters, a superstar and pioneer in TV news, has died, according to ABC News on Friday, Dec. 30, 2022. She was 93. (AP Photo/Evan Agostini, File)

“You know the scene where they’re collecting dead bodies during a plague, and there’s a guy they keep throwing in the heap, and he keeps saying, ‘I’m not dead yet’? Then they bash him on the head, and he gets up again and says, ‘I’m not dead yet!’

“He’s my hero,” Walters said with a smile.

Walters, whose death at age 93 was announced Friday, was a heroic presence on the TV screen, leading the way as the first woman to become a TV news superstar during a career remarkable for its duration and variety.

Late in her career, she gave infotainment a new twist with “The View,” a live ABC weekday kaffee klatsch with an all-female panel for whom any topic was on the table and who welcomed guests ranging from world leaders to teen idols. A side venture and unexpected hit, Walters considered “The View” the “dessert” of her career.

Walters made headlines in 1976 as the first female network news anchor, with an unprecedented $1 million salary that drew gasps.

During nearly four decades at ABC, and before that at NBC, Walters’ exclusive interviews with rulers, royalty and entertainers brought her celebrity status that ranked with theirs, while placing her at the forefront of the trend in broadcast journalism that made stars of TV reporters and brought news programs into the race for higher ratings.

Her drive was legendary as she competed — not just with rival networks, but with colleagues at her own network — for each big “get” in a world jammed with more and more interviewers, including female journalists who followed the trail she blazed.

“I never expected this!” Walters said in 2004, taking measure of her success. “I always thought I’d be a writer for television. I never even thought I’d be in front of a camera.”

But she was a natural on camera, especially when plying notables with questions.

In a voice that never lost its trace of her native Boston accent or its substitution of Ws-for-Rs, Walters lobbed blunt and sometimes giddy questions, often sugarcoated with a hushed, reverential delivery.

“Offscreen, do you like you?” she once asked actor John Wayne, while Lady Bird Johnson was asked whether she was jealous of her late husband’s reputation as a ladies’ man.

In May 2014, she taped her final episode of “The View” amid much ceremony and a gathering of scores of luminaries to end a five-decade career in television (although she continued to make occasional TV appearances). During a commercial break, a throng of TV newswomen she had paved the way for — including Diane Sawyer, Katie Couric, Robin Roberts and Connie Chung — posed with her for a group portrait.

“I have to remember this on the bad days,” Walters said quietly, “because this is the best.”

Her career began with no such signs of majesty.

Walters graduated from Sarah Lawrence College in 1943 and eventually landed for a “temporary,” behind-the-scenes assignment at “Today” in 1961.

Shortly after that, what was seen as the token woman’s slot among the staff’s eight writers opened. Walters got the job and began to make occasional on-air appearances with offbeat stories such as “A Day in the Life of a Nun” or the tribulations of a Playboy bunny. For the latter, she donned bunny ears and high heels to work at the Playboy Club.

As she appeared more frequently, she was spared the title of “‘Today’ Girl” that had been attached to her token female predecessors. But she had to pay her dues, sometimes sprinting across the “Today” set between interviews to do dog food commercials.

She had the first interview with Rose Kennedy after the assassination of her son, Robert, as well as with Princess Grace of Monaco, President Richard Nixon and many others. She traveled to India with Jacqueline Kennedy, to China with Nixon and to Iran to cover the shah’s gala party. But she faced a setback in 1971 with the arrival of a new host, Frank McGee. Although they could share the desk, he insisted she wait for him to ask three questions before she could open her mouth during joint interviews with “powerful persons.”

Although she grew into a celebrity in her own right, the celebrity world was familiar to her even as a little girl. Her father was an English-born booking agent who turned an old Boston church into a nightclub. Lou Walters opened other clubs in Miami and New York, and young Barbara spent her after-hours with regulars such as Joseph Kennedy and Howard Hughes.

Those were the good times. But her father made and lost fortunes in a dizzying cycle that taught her success was always at risk of being snatched away, and could neither be trusted nor enjoyed. She also described a “lonely, isolated childhood.”

Sensing greater freedom and opportunities awaited her outside the studio, she hit the road and produced more exclusive interviews for the program, including Nixon chief of staff H.R. Haldeman.

Reports failed to note her job duties would be split between the network’s entertainment division (for which she was expected to do interview specials) and ABC News, then mired in third place. Meanwhile, Harry Reasoner, her seasoned “ABC Evening News” co-anchor, was said to resent her salary and celebrity orientation.

“Harry didn’t want a partner,” Walters summed up. “Even though he was awful to me, I don’t think he disliked me.”

It wasn’t just the shaky relationship with her co-anchor that brought Walters problems.

Comedian Gilda Radner satirized her on the new “Saturday Night Live” as a rhotacistic commentator named “Baba Wawa.” And after her interview with a newly elected President Jimmy Carter in which Walters told Carter “be wise with us,” CBS correspondent Morley Safer publicly derided her as “the first female pope blessing the new cardinal.”

It was a period that seemed to mark the end of everything she’d worked for, she later recalled.

“I thought it was all over: ‘How stupid of me ever to have left NBC!’”

But salvation arrived in the form of a new boss, ABC News president Roone Arledge, who moved her out of the co-anchor slot and into special projects for ABC News. Meanwhile, she found success with her quarterly primetime interview specials. She became a frequent contributor to ABC’s newsmagazine “20/20,”and in 1984, became co-host. A perennial favorite was her review of the year’s “10 Most Fascinating People.”

By 2004, when she stepped down from “20/20,” she had logged more than 700 interviews, ranging from Ronald Reagan, Margaret Thatcher and Moammar Gadhafi, to Michael Jackson, Erik and Lyle Menendez and Elton John. Her two-hour talk with Monica Lewinsky in 1999, timed to the former White House intern’s memoir about her affair with President Bill Clinton, drew more than 70 million viewers and is among history’s highest-rated television interviews.

A special favorite for Walters was Katharine Hepburn, although a 1981 exchange led to one of her most ridiculed questions: “What kind of a tree are you?”

Walters would later object that the question was perfectly reasonable within the context of their conversation. Hepburn had likened herself to a tree, leading Walters to ask what kind of a tree she was (“Oak” was the response). Walters did pronounce herself guilty of being “dreadfully sentimental” at times and was famous for making her subjects cry, with Oprah Winfrey and Ringo Starr among the more famous tear shedders.

But her work also received high praise. She won a Peabody Award for her interview with Christopher Reeve shortly after the 1995 horseback-riding accident that left him paralyzed. But the interview Walters singled out as her most memorable was with Bob Smithdas, a teacher and poet with a master’s degree who had been deaf and blind since childhood. In 1998, Walters profiled him and his wife, Michelle, also deaf and blind.

Walters wrote a bestselling 2008 memoir “Audition,” which caught readers by surprise with her disclosure of a “long and rocky affair” in the 1970s with married U.S. Sen. Edward Brooke, a Republican from Massachusetts who was the first Black person to win popular election to the U.S. Senate.

“I knew it was something that could have destroyed my career,” Walters said shortly after her book’s publication.

Walters’ self-disclosure reached another benchmark in May 2010 when she made an announcement on “The View” that, days later, she would undergo heart surgery. She would feature her successful surgery — and those of other notables, including Clinton and David Letterman — in a primetime special, “A Matter of Life and Death.”

Walters is survived by her daughter, Jacqueline Danforth.

“I hope that I will be remembered as a good and courageous journalist. I hope that some of my interviews, not created history, but were witness to history, although I know that title has been used,” she told the AP upon her retirement from “The View.” “I think that when I look at what I have done, I have a great sense of accomplishment. I don’t want to sound proud and haughty, but I think I’ve had just a wonderful career and I’m so thrilled that I have.”

Moore, a longtime Associated Press television writer who retired in 2017, was the principal writer of this obituary. Associated Press journalists Stefanie Dazio and Alicia Rancilio contributed to this report.