A strong storm system brings the potential for damaging winds, isolated tornadoes and locally heavy rain to Minnesota and Wisconsin on Wednesday.

The National Weather Service has issued a dense fog advisory through noon.

AS YOU HEAD OUT THE DOOR: Visibility is still a cause for concern for commuters due to dense fog in the area. #MNtraffic @KSTP pic.twitter.com/jUr2IfrMba

Temperatures climbed into the low and mid-40s by sunrise, meaning roads remained primarily wet rather than icy in the morning. 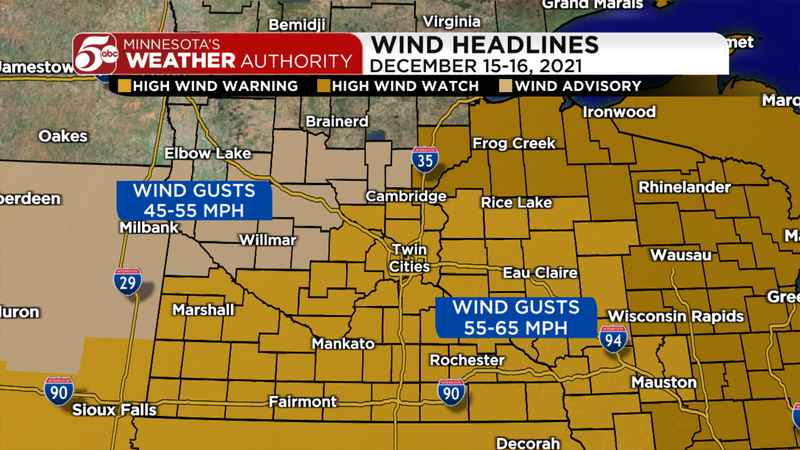 Meteorologist Jonathan Yuhas reports rain showers and thunderstorms are expected after 4 p.m., then severe thunderstorms with the potential for hail, damaging winds and tornadoes are possible in the early evening, mainly between 6 p.m. and 8 p.m.

Additionally, the NWS has issued a high wind warning through early Thursday.

South winds gusting up to 40 mph in the Twin Cities through the afternoon will push a warm front very close to the metro.

Meteorologist Matt Serwe reports high temperatures should climb into the mid- and upper 50s late in the afternoon into the evening. These readings would easily break the record high of 51° at Minneapolis-St. Paul International Airport set in 2014.

Late in the afternoon through the evening, a line of quick-moving severe storms is possible from northern Iowa into southern Minnesota. With such a strong storm system, any thunderstorm could easily produce severe wind gusts over 60 mph. In addition, with a lot of spin in the atmosphere, these storms could also produce isolated tornadoes. The window for severe storms in Minnesota and Wisconsin is about 5-9 p.m. on Wednesday.

After the line of storms moves through, the winds will pick up overnight. A high wind warning is in effect for the metro and southern Minnesota extending into western Wisconsin from Wednesday night into early Thursday. Counties in the warning area could have gusts from 55-65 mph at times. A wind advisory is also in effect for parts of central Minnesota. These counties could have winds gusts between 45 and 55 mph at times Wednesday night.

There are a number of potential impacts with this system, so it is important to start preparing right away. First and foremost, make sure you have a way to receive severe weather information Wednesday afternoon and evening. Go over your severe weather safety plan with those in your home so everyone is ready in case dangerous weather develops.

The strong winds will likely blow things around outside. If you have things outside that could blow around — especially large, inflatable holiday decorations — make sure you have them inside by Wednesday afternoon. These storms could also produce locally heavy rain, and most of the metro still has several inches of snow on the ground. This could lead to rapid melting of the snow, and that water needs to go somewhere. Make sure all downspouts and storm drains around your property are clear before the rain starts.