The Ramsey County Board of Commissioners has approved agreements to settle a discrimination lawsuit filed last year by eight current and former corrections officers.

Tuesday morning, the board voted unanimously to approve payments totaling $1,455,000 to be split amongst the eight plaintiffs.

Their actions started after an order from Steve Lydon, the then-superintendent of the Ramsey County jail, barring officers of color from entering the floor where former Minneapolis police officer Derek Chauvin was being held. The county says Lydon’s order was rescinded an hour after it was issued, and also noted a response of multiple officers of color to an emergency call that afternoon was affected by the order. 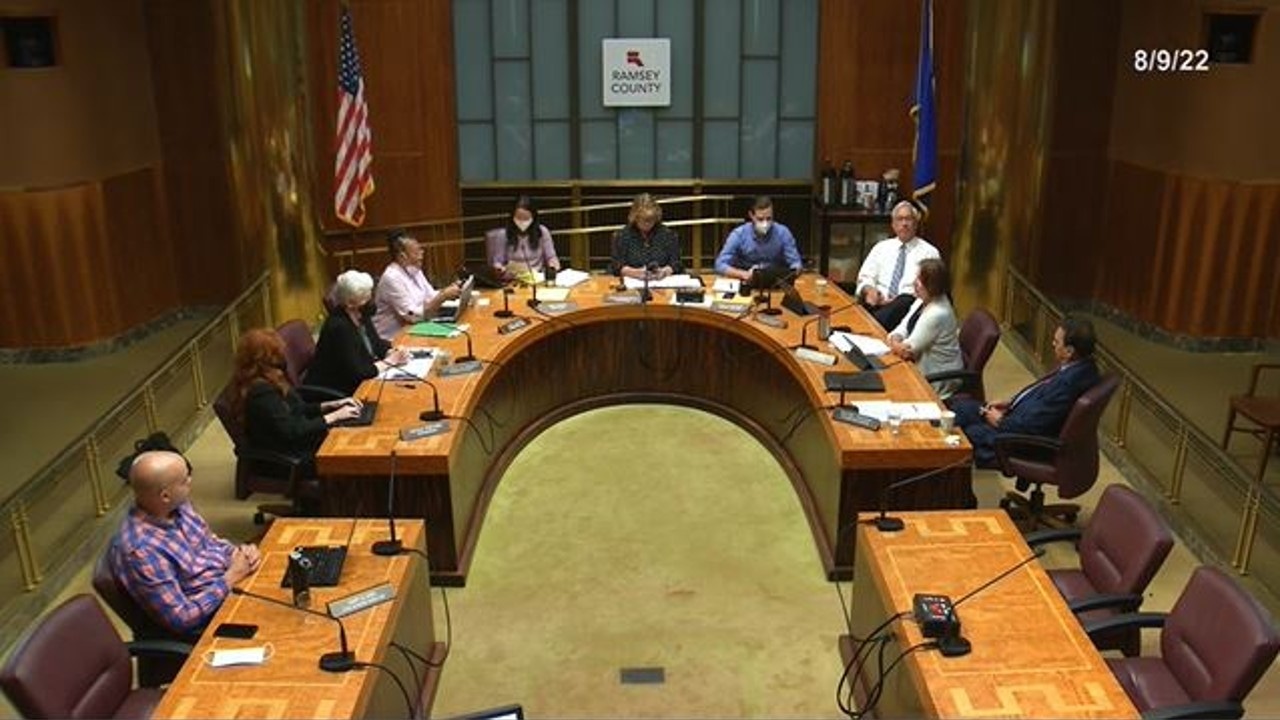 This picture shows the Ramsey County Board of Commissioners meeting on Aug. 9, 2022, before the board approved settlement agreements with eight current and former corrections officers who alleged discrimination.

Also, as part of the settlement, the county must issue a written statement acknowledging Lydon’s order was discriminatory and wrong and apologizing for it.

With the approved settlement, the group will now dismiss its civil lawsuit against the county, which previously had a jury trial scheduled to start on Aug. 8 before it was delayed to Oct. 31.

“The Ramsey County Sheriff’s Office must demonstrate accountability for the actions on May 29. The lack of any real apology from the sheriff’s office and the fact that Steve Lydon remains, to this day, an appointed employee within the office reflects poor leadership and perpetuates the systematic racism that allowed a decision like this to occur,” District 3 Commissioner Trista MatasCastillo said at Tuesday’s meeting.

“This is our community and we all have some responsibility in what happens in this,” District 6 Commissioner Jim McDonough added.

“We thank the Ramsey County Board for approving the settlement and apologizing to the plaintiffs for the segregation order,” Lucas J. Kaster of law firm Nichols Kaster, PLLP, one of the attorneys representing the correctional officers, said in a statement. “The courage of these eight officers cannot be overstated. During an unprecedented time in our community, the officers took the bold action to step forward and speak out against the segregation and racism they experienced. The past two years have not been easy for them, but the Board’s actions today acknowledge the harm experienced by the officers and are critical steps toward justice and accountability.”

“Trust and accountability are critical to our safety as correctional officers, and Superintendent Lydon’s segregation order broke this trust. Each of us is on our own journey toward healing from this damaging discrimination and the aftermath – and these settlements will help us open a next chapter. Our goal in bringing attention to the segregation order was to ensure Ramsey County was held accountable for its discriminatory actions and practices. We hope the County and Detention Center will continue working toward overall culture changes that create a safe and welcoming work environment for all.”

In response to a request for comment regarding the settlement, the Ramsey County Sheriff’s Office noted it wasn’t a named party in the lawsuit and “consequently had no decision-making authority in the settlement with the eight plaintiffs.” The sheriff’s office also pointed to its press release from June 20, 2020, in which the following quote was given by then-Superintendent Lydon:

“Recognizing that the murder of George Floyd was likely to create particularly acute racialized trauma, I felt I had an immediate duty to protect and support employees who may have been traumatized and may have heightened ongoing trauma by having to deal with Chauvin. Out of care and concern, and without the comfort of time, I made the decision to limit exposure to employees of color to a murder suspect who could potentially aggravate those feelings. Shortly after making the decision, Corrections staff expressed concern with the change and within 45 minutes I realized my error and reversed the order. I then met with the individuals that were working at the time and explained to them what my thought process was at the time and assured them that the decision was made out of concern for them and was in no way related to a concern regarding their professionalism or Chauvin’s safety. I realized that I had erred in judgement and issued an apology to the affected employees.”