There was broad call for change to policing in America as family, friends and an entire community laid Daunte Wright to rest.

The 20-year-old was shot and killed in Brooklyn Center during a traffic stop earlier this month.

Prosecutors said the officer thought she was grabbing her Taser but grabbed her gun instead. Former officer Kim Potter has been charged with second-degree manslaughter.

On Thursday, a group gathered outside of Washington County Attorney Pete Orput’s house to push for murder charges.

Civil Rights Attorney Nekima Levy Armstrong addressed him as he came out of his house, “If Daunte were your son, you would not tolerate that.” 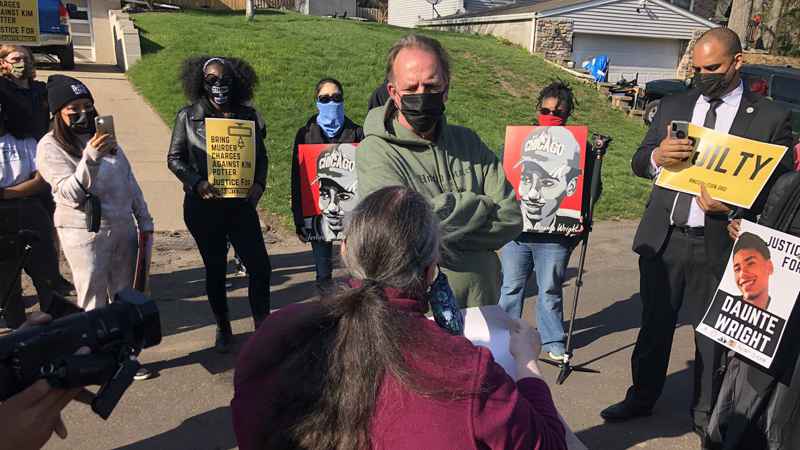 Orput told them he respected their right to speak with him but said, “Don’t talk to me about empathy.”

When a woman in the crowd inquired what empathy had to do with it he replied, “It got to do with I might give a damn about Black Lives Matter and people dying…"

Orput did not commit to a higher charge.

“I’m not going to give in to pressure to charge something I can’t prove," he said.

Among the crowd demanding justice was Billie Jean Van Knight of St. Paul.

“If it’s so easy to bring charges then bring the murder charges,” Van Knight said. “The jury can decide if they want to convict on both.”

Van Knight argued third-degree murder should be applied. She drew a comparison between Potter’s actions and those of former Minneapolis Police Officer Mohamed Noor, who was convicted of third-degree murder in the 2017 shooting death of Justine Ruszczyk Damond.

Van Knight held a sign with a portrait of Wright during our interview.

“He was scared and it turns out he should’ve been,” she said.

Hours earlier, about 30 miles away, family and friends said goodbye to Wright during his funeral.

“I never imagined that I’d be standing here, the roles should completely be reversed,” said Katie Wright, his mother. “My son should be burying me.”

She described Wright as a proud father, a jokester, and remembered his smile.

“When he walked into the room, he lit up the room,” she said.

“We are in this temple with purple all over because it represents royalty,” said Sharpton. “You thought (he) was just some kid with air freshener, he was a prince. And all of Minneapolis is stopped today to honor the prince of Brooklyn Center.”

Sharpton also evoked the memory of George Floyd and Philando Castile as he called for change.

“It’s time for America to stand up to a new day where we don’t have to explain to our children what to do when the police stop you,” Sharpton said. “The time has come for police to understand they’re not above the law.”

A message echoed by those in Stillwater.

“We can be better than we are right now,” said Van Knight, as she urged Orput to upgrade Potter’s charges. “He has to be brave in order to do that and we have to help him be brave to do that.”