UPDATE: The City of St. Paul has canceled north-south residential plowing operations for Thursday and Friday due to the forecasted snowstorm, according to a press release Wednesday night.

The meteorologists with Minnesota’s Weather Authority say snow is expected to move through Minnesota and Wisconsin Wednesday-Thursday, and multiple winter storm warnings are in effect.

“There were some streets that saw a noticeable difference with the plowing efforts and others that didn’t see much of an improvement due to hardened ice pack that was challenging to move,” the city said in an update at 6 p.m. Wednesday. 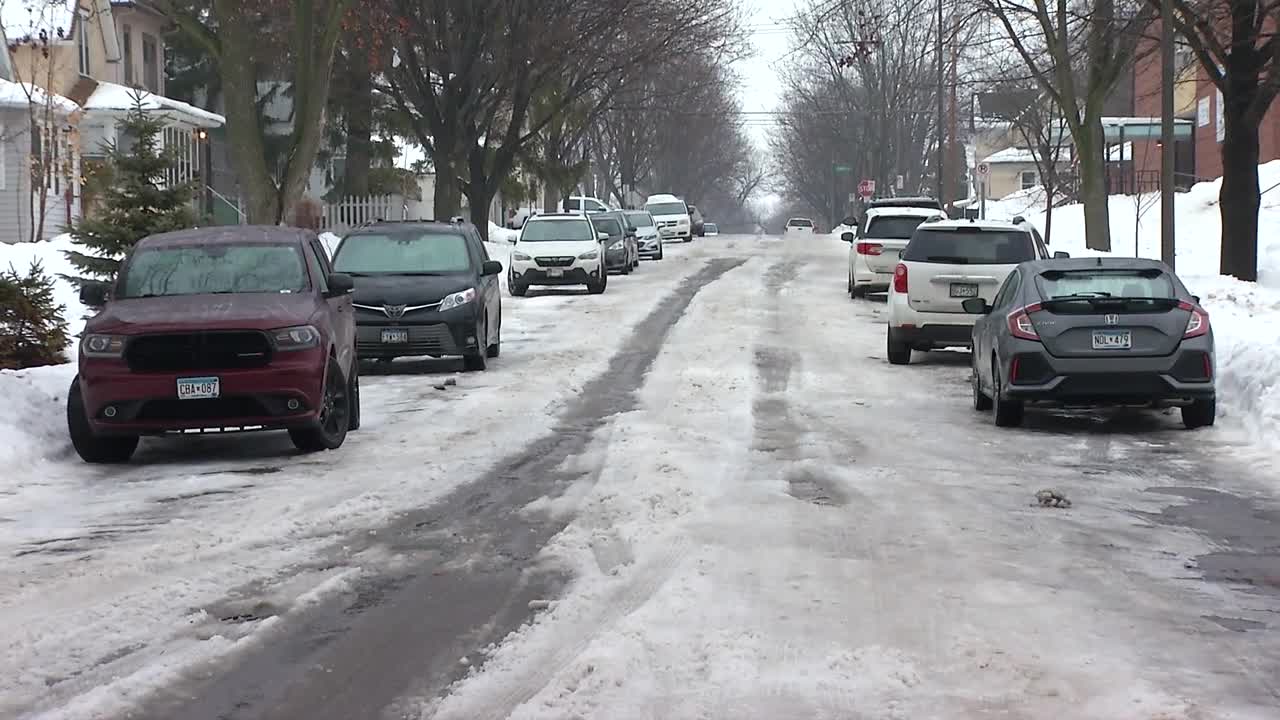 With more snow on the way and plowing operations halted, driving conditions will likely remain difficult.

View the full statement from the city below regarding the decision to cancel residential plowing.

Public Works has been closely tracking the developing storm expected to arrive later this evening. The storm is estimated to bring 3-6” of snow tonight (and through tomorrow, Thursday evening) in Saint Paul.

Due to the expected significant snow accumulation, Public Works is cancelling the Citywide Residential Plowing that was scheduled for the north-south residential streets on Thursday, January 19 and Friday, January 20.

Public Works crews must focus our plowing efforts on arterial and collector (main) streets instead of the residential side streets. Saint Paul plows approximately 300 miles when there is any accumulation on arterial streets from winter weather events.

In preparation for this snow storm, Public Works night crews will be pre-treating/salting bridge decks and downtown. Saint Paul may declare a Snow Emergency on Thursday if we get more than 3” of accumulation.

Read an earlier version of this story below. Stay with 5 EYEWITNESS NEWS for the latest on weather and road conditions.

INITIAL REPORT: After the first day of a planned weeklong effort to clear messy streets in St. Paul, the city’s head of public works is already apologizing after some residents were left frustrated.

Wednesday morning, St. Paul Public Works Director Sean Kershaw posted a message on social media, saying, “I want to be as accountable & transparent as possible – & apologize because we only finished 2/3 of our EW routes yesterday. The biggest reasons were weather & totally new routes.”

Kershaw added that the city had to pull 15% of its staff to address some snow that fell Monday night and early Tuesday morning, and sewer staff had to focus on opening storm drains after the rainfall the city got Monday. Additionally, he said the new plow routes slowed the process and “took longer than we expected.”

Over this past weekend, the city announced it would plow the messy residential streets Tuesday through Friday and asked for the public’s help with parking to ensure the streets were passable and able to be cleared. Tuesday, the plan was to plow the north (typically odd-numbered) side of east-west residential streets.

However, despite that plan and the cooperation with the city’s parking request, several residents reached out to 5 EYEWITNESS NEWS saying the plows never came Tuesday.

“On some streets, like my own, the impact of the work was not clear or acceptable. The public did their part – moving their cars,” Kershaw said. “We are working today to do our part.”

Kershaw noted that crews are better staffed Wednesday and getting an earlier start, and the city is prepared to adjust its Thursday and Friday plowing schedules if needed due to the upcoming snowfall.

“Drivers and their supervisors are working overtime to get this done,” Kershaw said. “Please be patient with them, & I apologize that we didn’t meet our goals or your expectations. This is important work.”