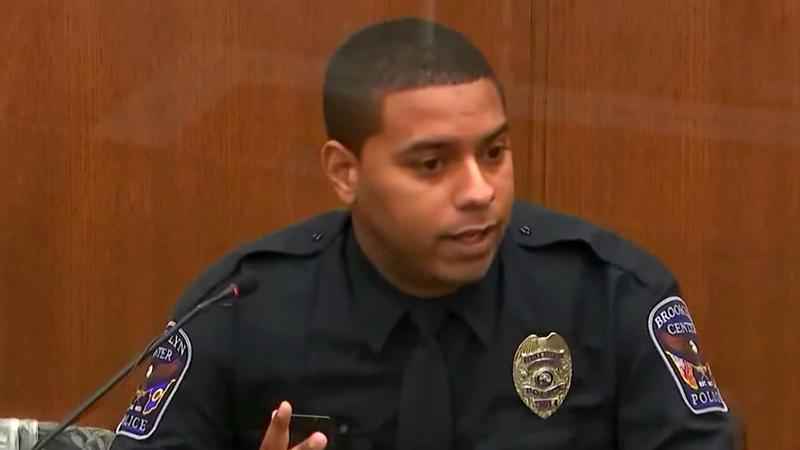 Potter, 49, is charged with first- and second-degree manslaughter in the death of 20-year-old Daunte Wright during an April 11 traffic stop.

Bryant emotionally discussed her son and his son, Daunte Jr. She explained that they’d given Wright their family vehicle just a couple of weeks before the shooting as his first car. On the morning of April 11, Bryant said her son came to her house and asked for some money to wash his car and fill it up with gas. He then called her twice, once to ask her which car wash he should go to and the second after he’d been pulled over. She also explained how she told Wright she could explain the car’s insurance situation to the officer over the phone.

"He sounded really nervous but I assured him that it would be OK," Bryant said through tears.

After hearing some commotion, their call dropped and Bryant recalled frantically calling Wright back. Eventually, the passenger in Wright’s car answered a video call screaming and saying Wright had been shot. Bryant then was driven to the scene by a neighbor and was seen on an officer’s body camera video frantically searching for her son and asking about his condition and why officers had shot him. She also testified that she knew her son’s body was under a white sheet at the scene because she recognized his shoes, which were sticking out from under the sheet.

But it was the officer Potter was training that testified for most of the afternoon. Officer Anthony Luckey walked the jury through his background and training, noting he was in the second phase of the four-phase field training program and his fifth shift with Potter on April 11.

Luckey described why he stopped Wright’s vehicle — for the air freshener hanging from the car’s rearview mirror, as well as turning left while signaling right and having expired tabs; he explained the initial conversation with Wright, which he called respectful; he noted Wright said he’d just bought the car from his brother, who it was still registered to, but had no driver’s license or insurance, and the car smelled of marijuana.

After finding Wright’s outstanding warrant on a gross misdemeanor weapons charge and a protection order for a female, Luckey then described the second trip to Wright’s door. It was then that Luckey, Potter and Sgt. Michael Johnson informed Wright he was being arrested on a warrant. However, when Luckey went to place handcuffs on Wright, Wright tensed up and moved his arm.

"Don’t do it, bro," Luckey could be heard telling Wright just before Wright tried to get back into his vehicle, leaving Luckey trying to pull him back out and Potter saying she’ll tase him. Luckey said Wright grabbed the steering wheel and was trying to drive away but didn’t have control of the vehicle when Potter yelled, "Taser, Taser, Taser" and then fired her gun.

After the shot was fired, Wright is heard saying, "Ah, he shot me" before the car speeds away. Body camera video then shows Potter saying, "I just shot him … I grabbed the wrong (expletive) gun … Oh my God." Potter then, in Luckey’s words, went hysterical. Video showed Potter distraught, screaming, crying and repeating "Oh my God." At one point, she was facedown on the ground with Johnson and Luckey trying to calm her down when she says, "I’m going to prison."

Luckey also testified that he would’ve used his Taser in that situation because the department’s policy states that’s OK as long as Wright didn’t have control of the vehicle, which Luckey said Wright didn’t.

Luckey never appeared to make eye contact with Potter, who was seen in court wiping away tears as the video of the incident was replayed.

The second day of the trial will start at 9 a.m. Thursday.