Potter confirms she will testify, state uses up strikes during Day 2 of jury selection

On day two of jury selection in the trial of former Brooklyn Center Police officer Kim Potter, five more people were seated. This brought the total number of jurors selected to nine. Potter is charged in the death of Daunte Wright.

Four men and five women have been selected, so far. At least one student, a teacher and a registered nurse joined the panel on Wednesday. One of the jurors selected owns a Taser.

Before selection started, District Court Judge Regina Chu asked the former officer whether she intends to testify. On both Tuesday and Wednesday, Potter’s attorneys told jurors she will take the stand during the trial.

“Do you understand it is totally your decision as to whether or not you testify?” Chu asked.

Potter responded, “Yes I do, Your Honor” and confirmed she plans to tell jurors what she experienced on April 11. 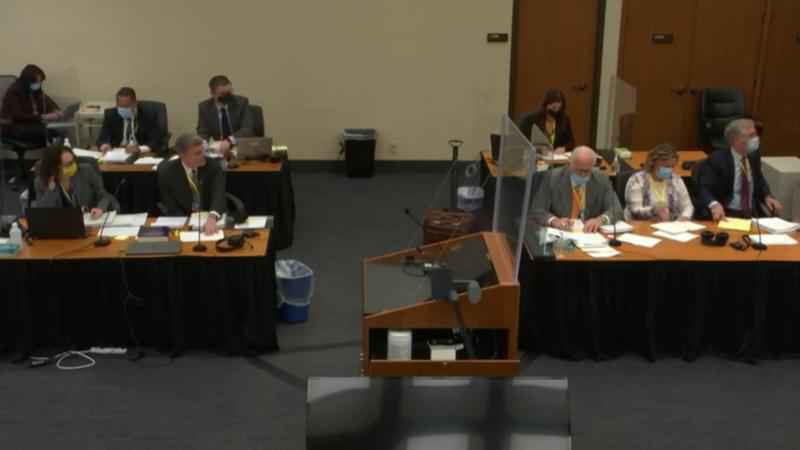 St. Paul-based criminal defense attorney Jack Rice, who is not affiliated with this case, said this issue isn’t typically addressed during jury selection.

“Kim Potter has no obligation to testify,” Rice explained. “Only she gets to decide — that’s a protection for her. At the same time, the fact that they’re already using this during jury selection, I think what we saw from Judge Chu was she decided, ‘I’m going to step in now and make sure that Kim Potter understands that constitutional right and to make sure I get that on the record’ so nobody can make some claim down the road that it wasn’t clear to her.”

Chu also made it clear to Potter that she can change her mind after the state rests its case. During trials in Minnesota, the state presents its case to the jury first. The defense follows.

“I’ve had many instances like this where I actually thought I had a client who was going to testify,” Rice said. “Then it’s my opportunity to put my client on the stand, I’ll be back in a room and they’ll say ‘I don’t want to’ or we’ve decided that we actually have sufficient evidence and we don’t need them to.”

Potter’s team has been laying the groundwork throughout jury selection for the arguments we’ll hear during the trial.

“The argument that the defense has already been talking about through the first parts of jury selection is about mistakes happen, about second chances, about the idea and the fear and intensity of what it is to be a police officer out there in the street, and how people need to depend upon the police,” Rice said.

The state used two strikes on Wednesday to dismiss two more potential jurors. As they were questioned by the prosecution and defense, the court learned Juror No. 28 and Juror No. 32 have neutral impressions of both Potter and Wright, they “strongly agree” police in their community make them feel safe, and expressed trust in police officers. Juror No. 32 also has a “very unfavorable view” of Black Lives Matter and was hesitant to second guess officers. Juror No. 28 opposes defunding the police.

The defense also exercised a peremptory strike to eliminate Juror No. 20. This juror indicated they had a negative impression of Potter, described disparities in the criminal justice system, and called Potter’s actions “a very dumb mistake.”

The defense is left with three of its five peremptory challenges heading into the third day of jury selection. The prosecution has used all three of its strikes.

“The problem with the prosecution is now they’re stuck with what’s coming next,” Rice said. “We have nine [jurors], there are three they’re going to choose plus [two] alternates, so there’s a lot that’s still out there.”

Peremptory challenges allow attorneys to eliminate a juror without giving a reason. In each trial, the state and defense are each given a limited amount. The judge can also cut jurors for cause, however, which the state will now rely on.

“So, in other words, if you get somebody you really don’t want, you’re going to try to push them into a corner to finally say they can’t possibly be fair,” Rice explained. “For the defense, what I think you’re going to see is something slightly different. They’re going to be looking for very particular people who will accept their argument.”