A man with an AR-15-style rifle ambushed three constable deputies outside a Houston bar early Saturday, killing one and leaving two others wounded, authorities in Texas said.

Authorities detained one person near the scene but he is not believed to be the shooter, according to the Houston Police Department which is investigating the shooting.

The constable deputies were working extra security jobs at the 45 Norte Sports Bar when two of them responded to a witness’ report of a suspected robbery outside the business around 2:15 a.m., according to Harris County Precinct 4 Constable Mark Herman.

The two deputies were trying to arrest someone when another person ambushed them, Herman’s office said in a statement posted on Facebook. That man had an AR-15-style rifle and opened fire on them from behind, according to authorities. The third deputy was shot when he came to help.

One of the first deputies who was shot, Kareem Atkins, died from his wounds, according to the constable’s office. Atkins, 30, recently returned to work after parental leave and leaves behind a wife and 2-month-old baby, the statement said. 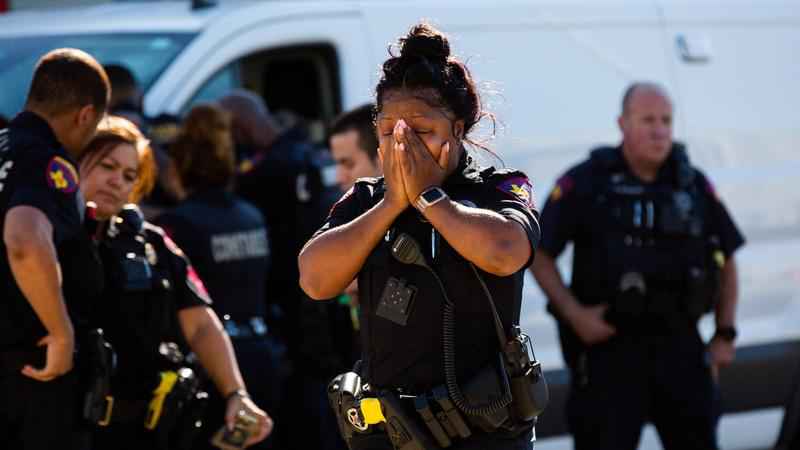 A Harris County Pct. 4 deputy exits the Harris County Institute of Forensic Sciences mourning the death of a deputy who was shot and killed in north Houston, Saturday, Oct. 16, 2021. Three constable deputies were shot in an ambush early Saturday morning while working an extra shift at a Houston bar. Authorities took one person into custody but were still searching for a man believed to be the shooter, Houston Police Executive Assistant Chief James Jones told reporters.[Marie D. De Jesús/Houston Chronicle via AP]

The constable’s office identified the other deputies as Darrell Garrett, 28, and Juqaim Barthen, 26. Garrett was shot in the back and was in intensive care after undergoing surgery. The office did not provide an update on Barthen’s condition, but Herman previously had told reporters that he was shot in the foot.

It was not yet clear whether the deputies returned fire, Houston Police Executive Assistant Chief James Jones told reporters.

Constables are licensed peace officers who perform various law enforcement functions, according to the Texas Association of Counties.