The city of Minneapolis tells 5 EYEWITNESS NEWS it is still finalizing "the timeline, process and approach" for reopening 38th and Chicago, the intersection known as George Floyd Square.

Barricades have blocked the intersection ever since George Floyd’s death nearly 11 months ago.

Last month, the city announced they may not wait until the end of the Derek Chauvin trial to reopen the roads. However, two days after the verdict, the intersection remains closed.

5 EYEWITNESS NEWS asked the city for an update on their plans Thursday. A city spokesperson said:

"City leaders continue to meet with community stakeholders to discuss the best path forward for the future of the intersection, understanding this is a very important gathering space for healing and reflection. The City is also working with the Floyd family and community members on plans to peacefully commemorate the first anniversary of George Floyd’s murder at this intersection. The safety and security of the neighborhood and community surrounding the intersection continues to be a top priority as those plans are developed. The interim design retaining the Fist Sculpture roundabout as well as partial or full reconnection are prominent planning factors for this work over the next month. We know that the short term goal is to reopen, but we are committed to sustained investments to help the community restore, reconnect, and rebuild."

The city had previously released several design options for reimagining the flow of traffic at 38th and Chicago.

The spokesperson said the current plan is to pursue the roundabout design, in which the large fist sculpture would remain in place and become the center of the roundabout, with traffic flowing around it. The plan also includes a bump-out memorial on the ground where George Floyd died, so that traffic would not travel over that space. 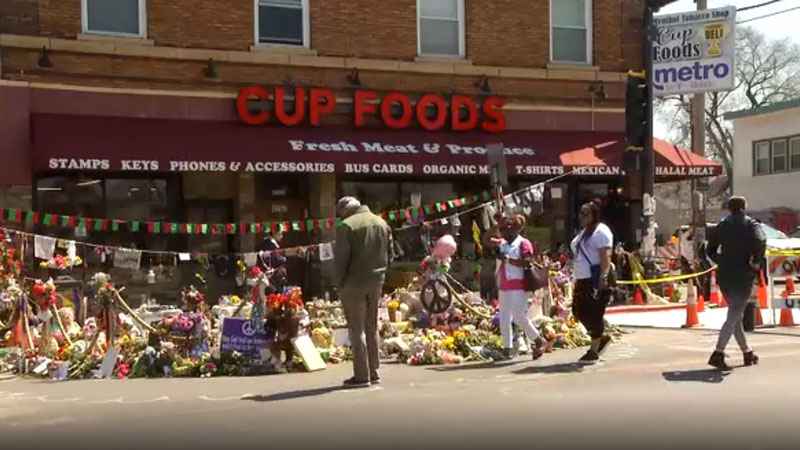 A coalition of businesses in the area known as the 38th Street Collective tells 5 EYEWITNESS NEWS they would like the intersection to reopen as quickly as possible.

"This is the only area in the United States that’s blocked off like this," said Just Turkey owner Sam Willis Jr.

Willis said business at his restaurant has decreased 75% due to lack of accessibility.

Willis said the barricaded streets also present an issue for first responders, such as police, firefighters and paramedics.

"If a person comes in my restaurant and they have a heart attack or a stroke, the ambulance won’t be able to get to these people, these customers. And then I’ll be liable for these customers not receiving the proper care that my tax dollars are paying for," Willis said.

A GoFundMe page has been set up to help nearby businesses that have suffered due to the streets being closed.

City officials have also repeatedly voiced concerns over increased crime in the area.

Last month, the Minneapolis Police Department announced a new partnership with the FBI and ATF to help address the rising crime.

At the time, they said there had been a 2,543% increase in ShotSpotter activations around George Floyd Square in the last year, along with a 240% increase in robberies and 378% increase in assaults.

Willis said he believes there has been a drop in crime ever since the federal law enforcement partners moved in to help.

As some demand the intersection reopens, others believe it should remain closed.

5 EYEWITNESS NEWS also spoke with community members who have been manning the barricades. Marcia Howard pointed to their list of 24 demands, which they call Justice Resolution 001.

Howard said they will continue to push back on reopening the intersection until the 24 demands are met, saying, "No justice, no street."

The city noted there is no set timeline for reopening 38th and Chicago, saying "planning work will continue over the next month."