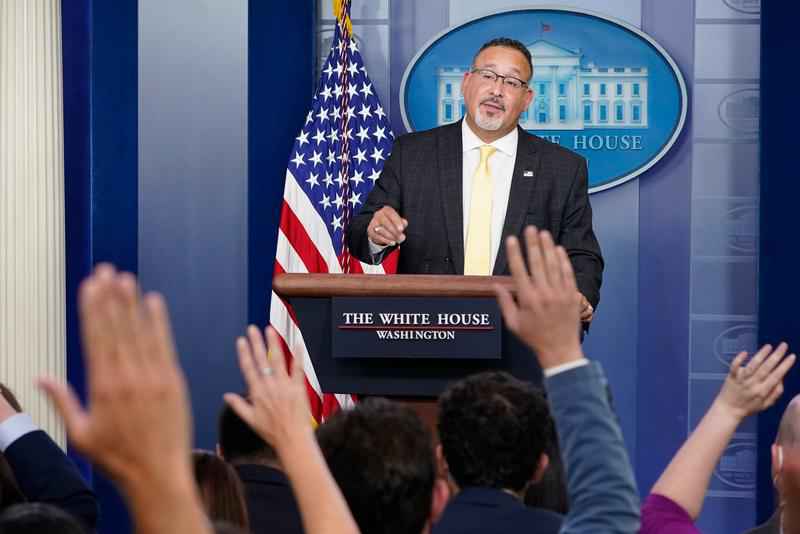 The Biden administration on Friday issued what it says will be the final extension to a student loan moratorium that has allowed millions of Americans to put off debt payments during the pandemic.

Under the action, payments on federal student loans will remain paused through Jan. 31, 2022. Interest rates will remain at 0% during that period, and debt collection efforts will be suspended. Those measures have been in place since early in the pandemic but were set to expire Sept. 30.

In announcing the decision, President Joe Biden said the economy is recovering “at a record rate." But he said the road to recovery will be longer for some Americans, especially those with student loans.

“This will give the Department of Education and borrowers more time and more certainty as they prepare to restart student loan payments,” Biden said in a statement. “It will also ensure a smoother transition that minimizes loan defaults and delinquencies that hurt families and undermine our economic recovery.”

The policy applies to more than 36 million Americans who have student loans that are held by the federal government. Their collective debt totals more than $1.3 trillion, according to the latest Education Department data.

Questions about the moratorium had been swirling in recent weeks as its expiration date approached. Even as the economy improves, there have been concerns that borrowers are not ready to start payments again. Once the moratorium ends, those who were already behind on payments could have wages and benefits taken away as part of debt collection efforts.

Several Democrats, including Senate Majority Leader Chuck Schumer, N.Y., and Sen. Elizabeth Warren, Mass., urged Biden to extend the moratorium through at least March 2022. In a June letter, they said restarting payments now would “drag down the pace of our economic recovery.”

“The payment pause has saved the average borrower hundreds of dollars per month, allowing them to invest in their futures and support their families’ needs,” the Democrats said.

The Trump administration initially suspended federal student loan payments in March 2020 and later extended it through January 2021. Biden moved to continue it through Sept. 30 soon after taking office.

The Education Department itself has raised concerns about administrative hurdles around suddenly restarting loan payments. In a November 2020 report, the department said it would be a “heavy burden” to reactivate millions of loans at the same time. It warned that some borrowers would likely fall behind on their payments, “at least initially.”

On Friday , the Education Department said the final extension provides enough time to restart the process smoothly, and it gives borrowers a "definitive end date” to plan for.

“As our nation’s economy continues to recover from a deep hole, this final extension will give students and borrowers the time they need to plan for restart and ensure a smooth pathway back to repayment," Education Secretary Miguel Cardona said in a statement.

Student advocates welcomed the extension, saying it’s a victory for borrowers who have suffered financial hardship during the pandemic. But Republicans criticized the move, saying the economy has rebounded strongly enough to resume payments.

“Students and families faced immense challenges last year, but the American economy continues to recover and there is no rational excuse for continued extensions of non-payment on student loans,” said Sen. Richard Burr, the top Republican on the Senate Health, Education, Labor and Pensions Committee.

The Biden administration announced the relief as it faces mounting pressure from some Democrats to erase huge swaths of student debt. Schumer and Warren have urged Biden to use his authority to cancel $50,000 in student debt for all borrowers, saying it would jumpstart the economy and help families hit hard by the pandemic.

They repeated that call in their statement on Friday, saying debt cancellation is “one of the most significant actions that President Biden can take right now to build a more just economy and address racial inequity.”

But Biden has questioned whether he has the authority for that kind of mass cancellation, and legal scholars have come to differing conclusions. Earlier this year, Biden asked the Education and Justice departments to study the issue. Officials have said that work is still underway.

Biden has previously said he supports canceling up to $10,000 in student debt, but he has argued it should be done by Congress.