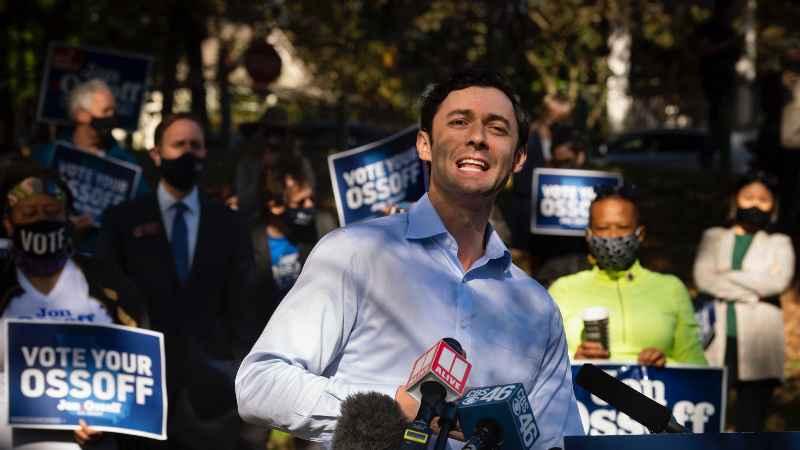 Georgia Democratic candidate for U.S. Senate Jon Ossoff speaks to the media as he rallies supporters for a run-off against Republican candidate Sen. David Perdue, as they meet in Grant Park, Friday, Nov. 6, 2020, in Atlanta.[AP Photo/John Amis]

His victory gives Democrats control of the Senate for the opening of Democrat Joe Biden’s presidency. Democrats needed to win both of Georgia’s Senate runoff elections on Tuesday to claim the Senate majority.

The 33-year-old Ossoff defeated 71-year-old Republican David Perdue, who held the seat for the past six years and had the strong support of President Donald Trump.

Warnock makes history with Senate win as Dems near majority

Trump had called on Georgia Republicans to swarm to the polls for the Republican Senate candidates even as he warned, without evidence, of the prospect of widespread voter fraud.

Biden held his own rally Monday to urge his coalition to turn out for Ossoff, a former congressional aide and journalist.

In the other race, the Rev. Raphael Warnock, a Democrat, defeated Republican Sen. Kelly Loeffler.

With the two Democratic victories, the Senate will have a 50-50 seat split between the parties. But the vice president casts tie-breaking votes, and that will be Democrat Kamala Harris.

Democrats already control the House, and adding the Senate will make it more difficult for Republicans to block Biden’s agenda, along with his Cabinet picks and judicial nominations.