Hundreds of protesters chanting "Stop Line 3!" and "Water is life!" gathered at the headwaters of the Mississippi River in northern Minnesota on Monday to resist a Canadian-based company’s plan to replace an aging pipeline that carries crude oil from Alberta to Wisconsin.

By late Monday afternoon, law enforcement moved in to begin arrested protesters who had chained themselves to construction equipment.

Protesters said the "Treaty People Gathering" was the largest show of resistance yet to the project. The Mississippi River is one of the water crossings for the pipeline.

A group called Indigenous Environmental Network said on Twitter that protesters had blocked a pumping station. Opponents have said they will do whatever it takes to block completion of the project, including risk being arrested. 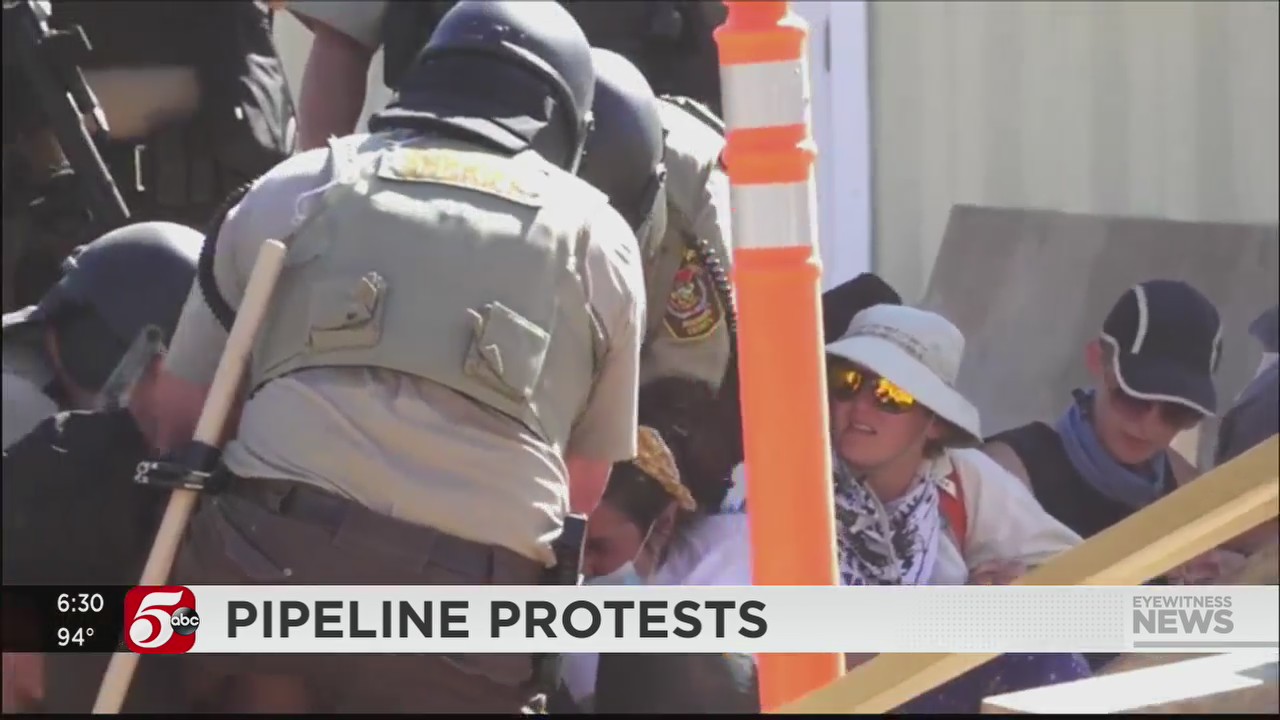 An Enbridge spokesman told 5 EYEWITNESS NEWS none of those claims are true, noting the project generating 13,500 pages of environmental impact statements and 70 public hearings.

"Through it all I think what we have is not only the most studied project in the history of Minnesota is we’ve got a very good product that’s going to both be safe and it’s going to be environmentally sound," said Mike Fernandez, senior vice president of communications for Enbridge. The company also says the $2.9 billion Minnesota portion of the project is employing 4,200 union construction workers in the state.

Speakers urged demonstrators to pressure the Biden administration. More than 300 groups delivered a letter to President Joe Biden last month calling on him to direct the Army Corps of Engineers to suspend or revoke Enbridge’s federal clean water permit for the project. They urged Biden to follow the example he set on the first day of his administration, when he canceled the disputed Keystone XL pipeline, citing worries about climate change.

Biden has not taken a stand on Line 3, while Walz is letting the legal process play out.

Protesters were urged to tweet at President Biden urging him to cancel the project to protect water near the pipeline.

Enbridge says the 1960s-era pipeline is deteriorating and can run at only about half its original capacity. It says the new line, made from stronger steel, will better protect the environment while restoring its capacity and ensuring reliable deliveries to U.S. refineries.

The company is gearing up for a final construction push on the pipeline, which clips a corner of North Dakota on its way across northern Minnesota to Enbridge’s terminal in Superior, Wisconsin. The Canadian and Wisconsin replacement segments are already carrying oil. The Minnesota segment is about 60% complete.

Enbridge has said it plans to put the line into service late this year.

Both sides are awaiting a ruling from the Minnesota Court of Appeals in June on a legal challenge by environmental and tribal groups who want to overturn state regulators’ approval of the project.

Separately, the Biden administration has declined to shut down the Dakota Access pipeline, which is owned by a different company and was the subject of major protests near the Standing Rock Reservation in the Dakotas in 2016 and 2017. In Michigan, Enbridge is defying an order by Democratic Gov. Gretchen Whitmer to shut down its Line 5 because of the potential for a spill in a channel linking two Great Lakes.

Enbridge, which updated the projected total cost for Line 3 in February to $7.3 billion (U.S.), has been touting the economic benefits, including about 4,000 jobs as full-scale work resumes.

The Minnesota Court of Appeals is expected to rule by June 21 on whether Enbridge adequately proved a long-term need for the project. The independent Public Utilities Commission approved the project, but the state Department of Commerce, two tribes and other opponents argue that the company’s demand projections failed to meet the legal requirements. Enbridge and the PUC say the projections complied.