Terry and Nancy Nielsen can still remember the red car that sped past them on a northern Minnesota highway last July as the Minneapolis family headed to their cabin near Lake Mille Lacs.

"All of a sudden, within like five seconds, you start seeing flashing lights," Nancy said.

Her husband Terry, at the wheel of the family’s red Tesla Model 3, did what you’re supposed to do—he pulled to the side of the road.

Instead of pursuing the suspect in the red Chevy Impala that kept going, Isle Police Officer Alex Thurber stopped behind the Nielsen family, jumped out of his squad car and pulled out his gun. 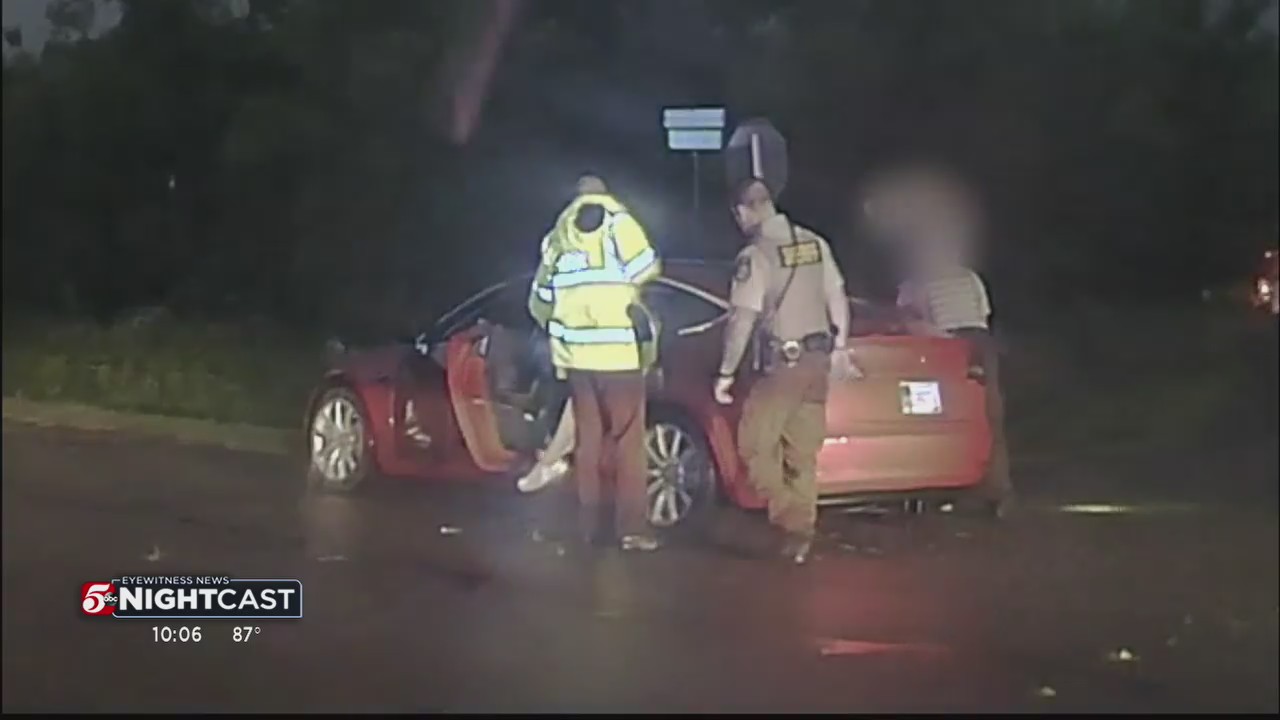 Police body-worn camera videos, obtained by 5 INVESTIGATES, show multiple sheriff’s deputies from Aitkin County shouting commands at Terry and ordering him out of the car at gunpoint. Nancy was also taken into custody before deputies removed the couple’s two teenagers from the backseat.

For nearly 40 minutes, Terry and Nancy told Officer Thurber he had the wrong car. They offered to pull up the Tesla’s recording system that shows speed and location data. They pleaded with the officers to review dash camera and other police videos that captured the events before the stop.

"Some of those other police officers there had to have said, been thinking at least and maybe even said to some of the others, this isn’t right," Terry said.

But the family will never know if that happened.

Every officer on the scene who had a body-worn camera recording the incident either turned it off or muted the audio at some point during the traffic stop.

"All of a sudden, we have gaps in the video, we can never recover that information," said Zorislav Leyderman, who represents the family in their federal civil lawsuit.

And the officers were allowed to do so. Their department policies say officers can invoke the "private conversation" provision during an incident, meaning they can turn off or mute their cameras when speaking with other law enforcement at a scene.

An attorney representing Aitkin County defended the policy saying it gives deputies discretion to stop recording when it is "unlikely to capture information having evidentiary value."

Such discretion has been used—and some critics argue abused—during several other high-profile cases in Minnesota.

Body-worn camera footage reviewed by 5 INVESTIGATES shows officers turning off or muting cameras even when the incident led to civil lawsuits and criminal investigations into their own conduct, essentially silencing the best and sometimes only witness.

After a K-9 bite in 2017 left an innocent bystander bleeding on the side of the road in St. Paul, officers at the scene muted their body cameras multiple times to speak with supervising officers.

During an arrest in Isanti in 2017, a surveillance camera caught a police officer throwing a suspect to the ground moments after he turned his body camera off.

A Morrison County deputy’s microphone stopped recording right as he started to explain why he shot a less-lethal round at a suspect that left a hole in the man’s chest in 2019.

"Those sort of incidents I think absolutely should have been on record," said DFL Sen. Mary Kunesh. "When you remove little bits and pieces of the puzzle we never get that full picture."

Kunesh is a member of the Minnesota People of Color and Indigenous (POCI) Caucus who has been pushing for police reform at the Minnesota State Capitol, backing a specific policy change that would require body cameras to always be on.

"The reason that we invest in these cameras is for that transparency," she said. "When it’s turned off or the audio is not there, it makes us start to wonder… what really happened?"

In Minneapolis, officers turned off body cameras in the aftermath of two of the department’s most high-profile officer-involved killings in recent history.

Eight officers, including a scene supervisor, turned off their cameras as they secured the scene after then-Minneapolis Police Officer Mohamed Noor shot Justine Damond in the alley behind her home.

The department has since updated its body-worn camera policy, including twice in the last year. Officers are now required to record—without disruption—throughout the duration of an incident. If the camera is turned off or muted, the officer must document why either on the body camera video or in a written report.

However, MPD still allows "temporary deactivation" of the cameras in several circumstances, including if a supervisor orders the camera be turned off, which is what happened after the murder of George Floyd last May.

On a body camera video that was played for the jury during the Derek Chauvin trial this spring, the former cop is heard saying, "… he was, ah, going crazy, ah, I’ll turn it off here in a moment…" before the video went to black.

His supervisor testified that he’d asked Chauvin if his camera was on or off because they were "having a private conversation" just minutes after George Floyd was taken away in an ambulance.

"You still have discretion and as long as that discretion is allowed I think folks are going to take full advantage," said former Hennepin County Sheriff Rich Stanek.

When first introduced as a tool for law enforcement, body-worn cameras were seen as an "independent, silent witness" that was used to preserve or record evidence at the scene of a crime, Stanek said.

He now consults with Axon, a company that manufactures and sells body-worn cameras to police departments across the country. Prior to that, Stanek implemented the body-worn camera program in Hennepin County.

"It was not generally used to record conversations between officers," he said, explaining those situations could result in violation of an officer’s constitutional right against self-incrimination under the Fifth Amendment.

As the public demands more transparency and accountability from law enforcement, Stanek predicts agencies will get rid of broad officer discretion in body-worn camera policies.

"I think you’re going to find best practice, model policy tend to start to go the other way, which is that the camera will remain on during the entire shift and these private conversations that are had between officers will not fall under the exemption," he said. "But it’s going to take a while before we get there."

Those shifts in policy are already happening. In St. Paul, officers were permitted to mute their cameras in certain circumstances. But in June 2018, a spokesperson said the department changed the policy and prohibited the practice.

Daniel Lawrence, a researcher with the Urban Institute, said it’s ideal for cameras to remain on from start to finish.

"The reality though is that officers do have a lot of discretion in their behaviors," he said, pointing to his extensive studies of police department policies from around the country.

"There are instances where officers may decide that they should have a side conversation with other officers and decide to turn that camera off. In most cases, that’s not against the policy, but it certainly isn’t viewed as a positive thing," Lawrence said.

"It feeds into the problems that we’re seeing now where we have a huge mistrust of law enforcement," said Leyderman, the Nielsens’ attorney. "In my view, the cameras should never turn off."

The slideshow below is a visual timeline of events the night the Nielsens were taken into custody, using screenshots of body camera and dash camera video.

‘You’re not being arrested’

The Nielsen family was released an hour after being taken into custody.

With his body-worn camera still muted, Officer Thurber is summoned over to a Minnesota State Patrol trooper’s car at the scene.

The trooper, with his laptop on the hood of his squad car, plays dash camera video that shows officers waving the Nielsens’ car through a chaotic police scene earlier that evening.

Thirty seconds later, the video shows a second red car drive over spike strips that were placed on the highway. That was the red Chevrolet Impala that Officer Thurber had chased for more than 15 miles at speeds up to 115 miles per hour.

"As of right now, you’re not being arrested," Officer Thurber said to Terry Nielsen, after unmuting his camera.

He offered the couple a short apology, a quick handshake and no explanation.

"It just dropped, just like that," said Nancy Nielsen. "And then all of a sudden we’re in the car."

"I was just shaking like crazy," Terry said, explaining that he barely made it two miles down the road before having to pull over.

The couple’s lawsuit against the Isle Police Department, Aitkin County Sheriff’s Office, and the Minnesota State Patrol is pending.

Officials from the Isle Police Department and the Minnesota State Patrol declined to comment, citing the lawsuit.

The couple says this experience changed the way they think of law enforcement.

"It’s gotten a lot harder to believe in the police," Nancy said. "Why did they get to have a private conversation and we have no idea what was discussed?"