A west metro emergency room and urgent care department are closed because of a strike.

Fifty nurses who are part of the Minnesota Nurses Association and work at Abbot Northwestern’s WestHealth location are striking through Wednesday morning. The strike resulted in a temporary suspension of the location’s emergency and urgent care services.

Picketers were outside the Plymouth clinic from 7 a.m. to 5 p.m. on Sunday, and they plan to continue on Monday and Tuesday.

“WestHealth nursing staff stayed the course during the COVID-19 pandemic. Now, in its wake, Allina is refusing to make the necessary movement toward a fair contract," said Sonya Worner, a registered nurse at WestHealth. "Allina admitted that it is not because they don’t have the money to fund the minor benefit increases we are asking for, but stated that our contract is ‘good enough.’”

According to the MNA, nurses have been negotiating a new contract for months. The main sticking point right now is with holiday pay for summer holidays — nurses are pushing for time-and-a-half pay when they work a holiday shift. 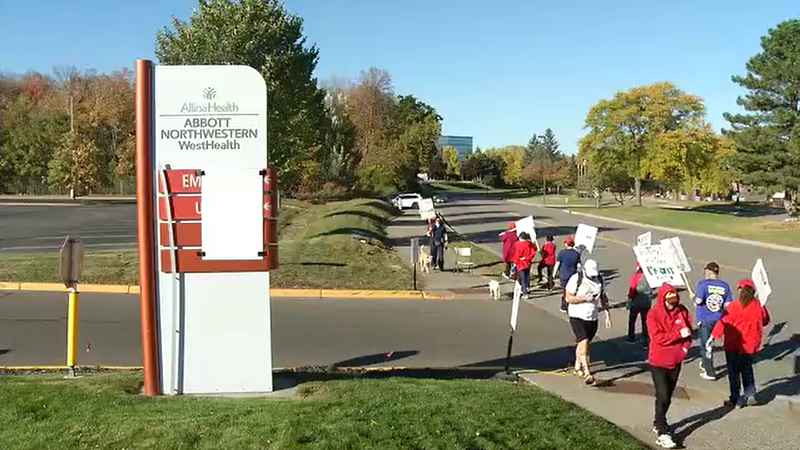 Allina Health issued a statement, which reads, in part:

"Allina Health and Abbott Northwestern WestHealth have negotiated 7 times with MNA. A contract settlement was previously reached and unanimously recommended by the union’s bargaining team. Unfortunately, the MNA could not finalize that agreement. Throughout negotiations, we have consistently offered proposals that demonstrate our commitment to our employees, including an immediate wage increase to align wages with other metro hospitals and agreeing to some of the union’s other priority issues.

"At a time when hospitals are under significant pressure throughout the state and country due to sustained high volumes from COVID-19 and other acute illness, a work stoppage benefits no one. It is our preference to reach an agreement on a new contract that prioritizes the health needs of the community and sustainably recognizes the contributions of our employees."

Nurses tell 5 EYEWITNESS NEWS Allina called the MNA has asked that the nurses return to work on Wednesday morning. Nurses plan to do so and hope contract negotiations continue.