Protesters gathered for a fifth night at the Brooklyn Center Police Department to call for just in the shooting of 20-year-old Daunte Wright.

Wright was shot and killed by now-former police officer Kim Potter during a traffic stop Sunday in Brooklyn Center.

According to a KSTP reporter who was at the scene, the crowd steadily thinned out after curfew, and police never issued any orders to disperse. Operation Safety Net estimates there were "fewer than 20" people remaining 90 minutes after the 10 p.m. curfew took effect. 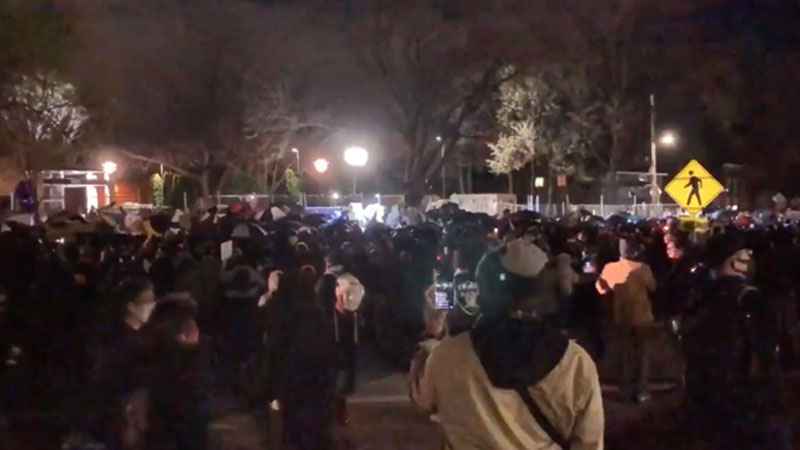 Curfew took effect in Brooklyn Center at 10 p.m., but half an hour in, KSTP crews have not seen law enforcement take action to disperse the crowd.

20mins after curfew and still no announcement or things done to disperse crowd. @KSTP pic.twitter.com/9jziyX6yAy

A KSTP crew in the area of the police department reports that school buses with the names taped over, along with police and National Guard troops, are lining up at Humboldt and 65th avenues near the entrance to Highway 100.

Members of the crowd at the Brooklyn Center Police Department was audibly energized when they received curfew alerts on their phone, according to a reporter at the scene.

The reporter said some items were lobbed over the fence surrounding the police department.

Protesters still peaceful, only a few water bottles thrown over fence – no return from law enforcement.
Crowd did get energized when the curfew (10p) warning was sent to phones.@KSTP pic.twitter.com/NvKUg8HDzX

A KSTP reporter outside of the Brooklyn Center Police Department reports that protesters have set up a projector to display "Justice 4 Daunte" against a law enforcement vehicle.

A projector has been put up to shine against law enforcement truck outside #BrooklynCenter PD. @KSTP pic.twitter.com/TzhIKCGktY

After a closed session, acting City Manager Reggie Edwards gave a briefing on the protests so far and laid out the city’s plan for the days to come.

He said overall, arrests stemming from the unrest have steadily declined throughout the week and the introduction of curfews has helped to clear people out of the area sooner.

He said that "95% percent of protesters are protesting peacefully" but said the city wants to bring in "interveners" to work between law enforcement and protesters and create a space for people to safely exercise their First Amendment rights.

Toward the end of the meeting, Elliott announced a curfew from 10 p.m. Thursday to 6 a.m. Friday in Brooklyn Center. He also said the city would schedule a time in the future for the public to weigh in on the use of tear gas.

The crowd has started to grow larger, and people at the scene are calm and listening to activists outside the police station.

According to a KSTP reporter at the scene, some community members who have gathered at the police department are offering free food to protesters.

Air fresheners were also hung on the fence surrounding the precinct.

Outside the #BrooklynCenter PD protesters continue to call for justice for Daunte Wright — peaceful with a BBQ with free food. pic.twitter.com/XGPpnI4ogJ

Wright’s mother, Katie Wright, told KSTP earlier this week her son called her during the traffic stop and told her he was pulled over because he had an air freshener in the rearview mirror.

Police have later claimed the traffic stop was due to expired tabs.