The Minnesota Department of Management and Budget (MMB) released a summary of its latest economic forecast Monday, showing an improvement of $1.507 billion, moving the current projected surplus to $9.253 billion. The department will release further details Monday afternoon.

MMB cited higher income, consumer spending and corporate profit forecast as the reason for the improved revenue projection and an improved budget forecast. The department cited inflation and the current Russia-Ukraine conflict as threats to the state’s budget and economic outlook, moving forward.

“What we’ve seen here is the state’s economy continues to recover,” MMB Commissioner Jim Schowalter said, adding that, despite many uncertainties, “our budget outlook remains strong.”

Gov. Tim Walz said the updated forecast is leading him to consider tripling his proposal for direct rebate checks to Minnesotans. He also said he’d consider income tax cuts for Minnesotans but not for the wealthiest Minnesotans. 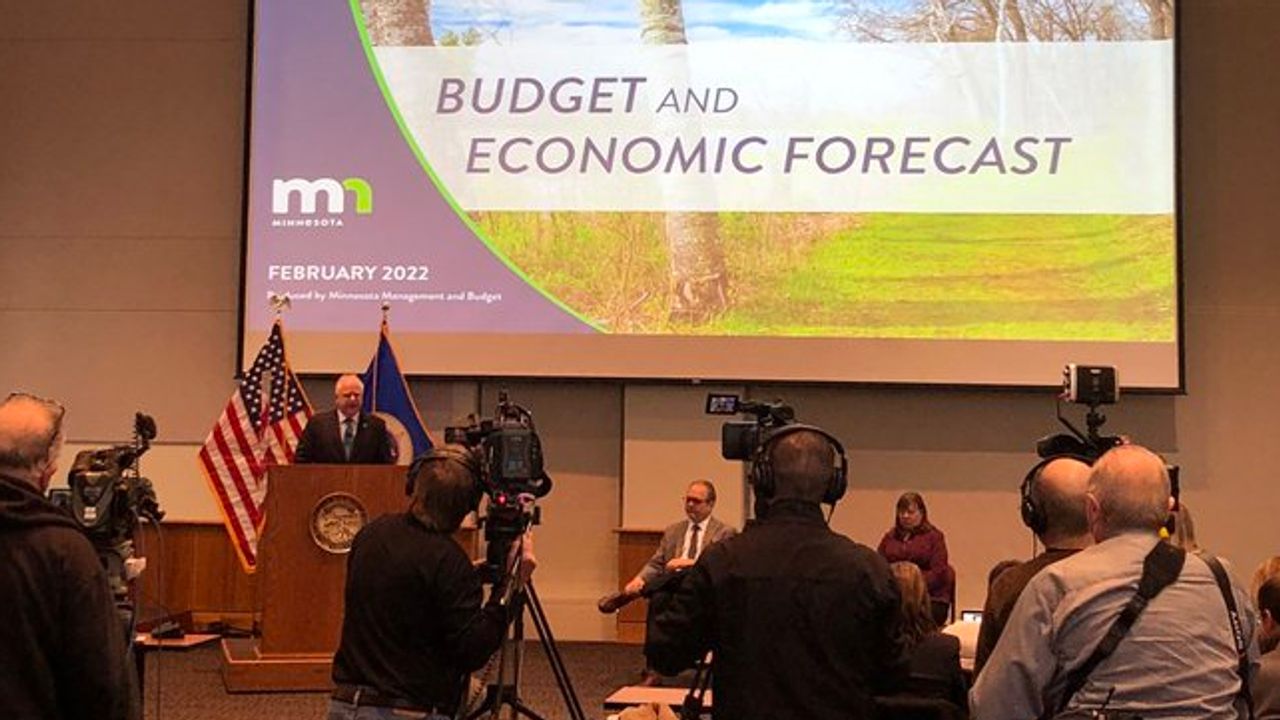 “The massive surplus continues to get larger meaning the state government is simply collecting too much money from the taxpayers. It’s time to give the money back to the people with permanent tax relief for Minnesotan workers and senior citizens,” Senate Majority Leader Jeremy Miller said.

House Majority Leader Ryan Winkler said in a statement, “The United States is facing the biggest geopolitical challenge since the Cold War, and it remains to be seen what impact it could have on our economy and family budgets. Today we learned Minnesota’s budget surplus grew significantly, but MMB’s economic analysis does not factor in this new global crisis. It’s clearer now than ever that our state government should be doing everything in its power to support workers and their families — the people who bear the economic brunt of global crises. Democrats will oppose extreme Republican proposals that shower the biggest corporations and wealthiest individuals with tax cuts that could tank budget stability in Minnesota for decades.”

Walz said he wants to use $300 million of the projected surplus on grants for communities to help fight crime.

“Empowering community groups to work hand-in-hand, and to move upstream, and this attitude of we can’t allow violent crimes to increase, we can’t allow our children to be involved with this and we can’t allow shootings on the streets and there’s a whole spectrum of things we should be doing here together,” Walz said.

In the Minnesota Senate, two bills were debated that would aim to provide bonuses to law enforcement officers.

One bill would provide up to $10,000 bonuses to peace officers who perform “acts of heroism or valor” or other actions above the call of duty. The other bill would provide one-time bonuses to law enforcement officers of $1,500 to thank them for their service in difficult times and higher bonuses of up to $5,000 for officers over the age of 50.

“Are the Republicans also planning to offer bonuses in the education committee for teachers who continue to serve?” Sen. Sandy Pappas (D-St. Paul) said. “Because I know we do have teachers that have been leaving.”

In response, Sen. Paul Gazelka (R-East Gull Lake) said, “I know that I wanted to focus on public safety. I just felt like that was the most critical issue right now and so that’s where I put my focus. But it would not surprise me if there were bills for some of the other professions that you mentioned.”

No votes were taken on those Senate bills but they will be considered for inclusion in a larger public safety bill later this session.

There is also a proposal from Republicans to offer tax cuts with the budget surplus.

This latest budget forecast of more than $9 billion – $2 billion more than previously expected and the largest surplus in state history – is further proof that Minnesotans are overtaxed.

As a result of the failed policies of Democrats like President Biden and Gov. Walz, inflation in our state is at an all-time-high and families and businesses are struggling to pay their bills, heat their homes and make ends meet.

Republicans in the Legislature are calling to invest the surplus in real, meaningful reforms that will ease the burdens of Minnesotans. All Democrats are offering are gimmicks and giveaways. I applaud our GOP lawmakers for calling for tax relief – it has never been more important than it is right now to give our hardworking Minnesota families and businesses more of their hard-earned money back.

Stay with 5 EYEWITNESS NEWS and KSTP.com for updates on the budget forecast.