A second lawsuit has been filed against Daunte Wright’s estate, this time alleging he assaulted and robbed a man in March, just three weeks before former Brooklyn Center police officer Kim Potter shot and killed him during a traffic stop.

The civil complaint, filed in Hennepin County District Court by attorney Michael Padden, claims Wright was there when an accomplice shot 20-year-old Joshua Hodges on March 21 before the two robbed him of his phone, wallet and car. Padden also filed a lawsuit in May that alleges Wright shot and permanently disabled a teenager in 2019.

In a joint statement provided to 5 EYEWITNESS NEWS, they denounced the continued legal action against Wright’s estate.

"Already grieving the loss of their loved one, is Daunte Wright’s family also expected to endure this character assassination on top of it?" the statement read. "The audacity of this attorney is disappointing, and we implore members of the community to not be drawn in by these opportunistic efforts to tear down Daunte and hurt his family. Ploys like these aim to do one thing: distract. But our team will not be distracted in our fight for justice in this case and in our fight for justice for all marginalized communities." 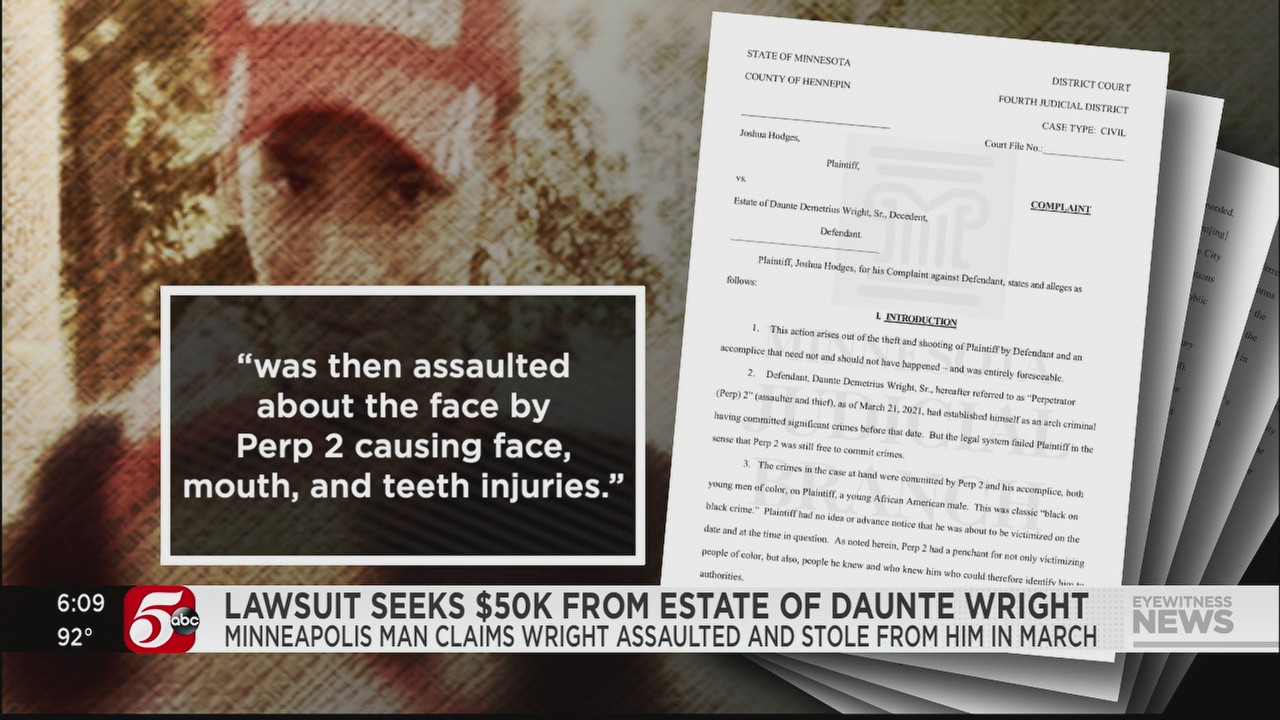 The lawsuit states that around 7:05 p.m. on March 21, Wright and another person got out of a car and approached the plaintiff, Hodges, who was sitting in a 2004 Honda Civic outside a residence on Washington Avenue in north Minneapolis.

The lawsuit goes on to say the person who was with Wright opened the driver’s side door and shot Hodges in the leg, striking an artery and causing "massive bleeding" and fracturing the victim’s fibula. Then, Wright allegedly beat Hodges, leaving him with injuries to his face, mouth and teeth. The gunshot wound resulted in a "lengthy hospitalization," and Padden argues the incident "easily could have resulted in (Hodges’s) death."

Hodges claims to have recognized Wright as one of the perpetrators because they had previously gone to school together. The complaint states shortly after Wright started approaching Hodges’s car, he realized the victim recognized him and put on a mask.

The lawsuit seeks at least $50,000 in damages on counts of assault and battery, aiding and abetting, intentional infliction of emotional distress, negligence and theft.

This is the second lawsuit filed against the estate of Daunte Wright in as many months. Padden is representing the plaintiffs in both of those cases.

In May, the mother of 18-year-old Caleb Livingston sued Wright on allegations that he had shot Livingston in the head on May 14, 2019, outside a gas station in north Minneapolis. Court documents claim Livingston now has permanent physical and mental disabilities and relies on his mother, Jennifer LeMay, to handle his basic living needs.

In both cases, Padden emphasizes Wright’s criminal history, including being charged in the aggravated robbery of a woman in Osseo in 2019 and having an arrest warrant on suspicion of illegal possession of a firearm and fleeing from police on June 30, 2020.

“The sad reality is that Daunte Wright was an arch criminal, and anyone who says otherwise is not being honest," Padden told 5 EYEWITNESS NEWS. "The crimes regarding Caleb Livingston, the Osseo victim six months later, and Joshua Hodges clearly represent just the tip of the iceberg.”