Dana Abrahamson — even on a bitterly cold day — loves to walk with her dog, Des, and loves helping others.

“This is our seventh fundraiser in our yard, actually,” she says. “My husband retired in 2015 from the South St. Paul Police Department and we started six months after he retired.”

Outside their Inver Grove Heights home, is an ever-growing holiday display — including an occasional visit by Santa Claus himself, who greets young and old at least 8-9 nights during the holidays.

“We had a lawn chair and a bale of hay we sat on and greeted children,” Old St. Nick says with a smile. “There are so many people, this brings joy as well to me. Absolutely unbelievable.” 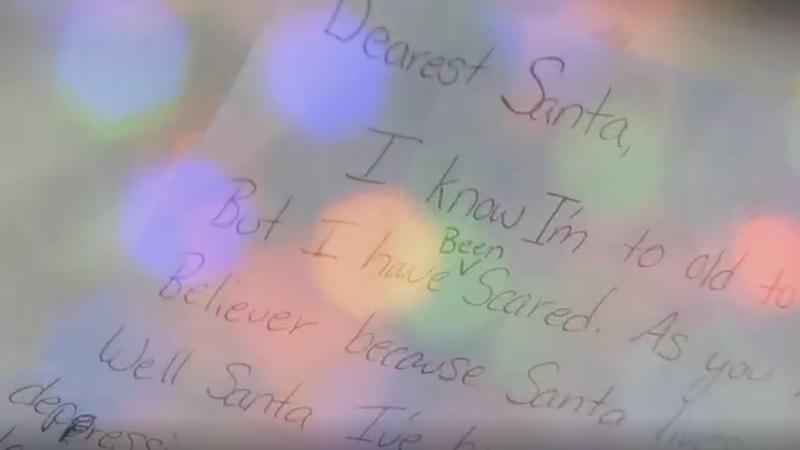 Abrahamson and her husband started their nonprofit, called "Soldier’s 6," at about the same time.

The "6" part comes from military parlance meaning "got your back."

"So we provide service dogs to military vets, police officers, firefighters, paramedics, and 911 dispatchers, who suffer from PTSD and live in Minnesota,” Abrahamson explains.

Since then, she says, the group has connected 65 dogs with new owners, making them "battle buddies."

But that’s not all.

The Soldier’s 6 program also donates food to Neighbors, Incorporated — a hunger relief program in the metro.

Abrahamson says her nonprofit collected 800 pounds of donated food during the 2020 holiday season, and that number has kept on rising, year after year.

People can come by, get a picture with Santa, and donate food or money.

They can also drop off a letter in a special mailbox.

And then, over the weekend, it happened.

“We came across this one letter, it just said Santa on the envelope, in nice writing,” Abrahamson recalls.

The letter came from a woman who signed it simply, "Jackie T."

"Dear Santa, I’m too old to be writing this letter, but I’ve been scared,” the letter says. “I’m scared I’m going to be losing my daughters. They can’t get the COVID vaccine because of their disorders. If they get COVID, they may not make it through.”

Abrahamson shared the note with Santa.

"I was torn emotionally when I read that letter,” he told us. “We don’t know what we can do. We don’t know where this letter is going to take us. It’s like a letter in a bottle, washed up right here in my mailbox.”

The letter went on to say this:

"We weren’t able to buy this much this year ever since Justin’s pay cut and COVID, it’s been tough.”

There was just one small request.

"My Christmas wish is for your prayers. Please pray for my two little blessings to stay safe and healthy. Thank you, Santa, for bringing tomorrow’s love to all the children of the world. P.S., please give a kiss to Mrs. Claus. Love, Jackie T."

By now, the Abrahamsons wanted to do more.

They spread the word on social media, hoping they could locate Jackie T., and somehow, try to help.

"We want to make sure the girls have a good Christmas and get everything on the list they want. We want to make sure mom and dad are taken care of, too, so that they can focus on just having a good Christmas,” Abrahamson declares. “Whether that’s paying off a few bills for them, or helping them with the energy bill, groceries, giving them a night out if they need. We want to be there to be able to do that."

But on Tuesday evening, around 9 p.m., a holiday miracle of sorts occurred.

She says someone had seen her post about the situation on the Soldier’s 6 website and connected the two women.

It turns out Jackie T. lives in Hastings and Abrahamson says she told her there was only one present for each girl under their Christmas tree.

And she says — the two girls say they still believe in the magic of Christmas.

Not a bad ending for a mystery that touched a lot of hearts.

Abrahamson says at least 40 people reached out to her on social media, asking what they could do to help.

"If we or I can help somebody over their hurdle for what they’ve got, or give them direction to help them to where they need to go to help, we will do it,” Santa told us. “That’s what this is all about."

"We’ve all been there. We’ve all had a hard time, and no one’s perfect, we all, at the end of the day, try to do our best,” Abrahamson adds. “I have sympathy for all humans, but kids, especially at Christmas. I just want to make — I want to give them a miracle."