Officers in Minneapolis are taught to restrain combative suspects with a knee on their back or shoulders if necessary but are told to "stay away from the neck when possible," Minneapolis Police Department Lt. Johnny Mercil, a use-of-force instructor, testified Tuesday.

Mercil became the latest member of the Minneapolis force to take the stand as part of an effort by prosecutors to dismantle the argument that Chauvin was doing what he was trained to do when he put his knee on George Floyd’s neck last May.

Several experienced officers, including the police chief himself, have testified that Floyd should not have been kept pinned to the pavement for close to 9 1/2 minutes by prosecutors’ reckoning as the Black man lay face-down, his hands cuffed behind his back. 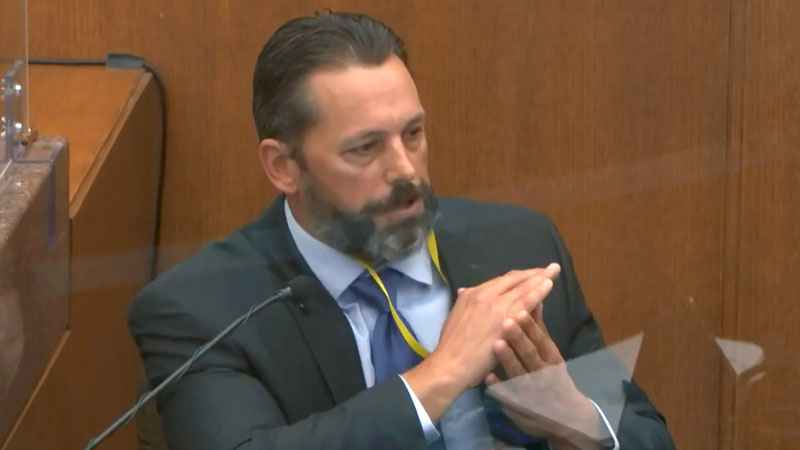 In this image from video, Minneapolis Police Lt. Johnny Mercil, a use of force trainer, testifies as Hennepin County Judge Peter Cahill presides Tuesday, April 6, 2021, in the trial of former Minneapolis police Officer Derek Chauvin at the Hennepin County Courthouse in Minneapolis.[Courtroom Video]

According to testimony and records submitted Tuesday, Chauvin took a 40-hour course in 2016 on how to recognize people in crisis — including those suffering from mental problems or the effects of drug use — and how to use de-escalation techniques to calm them down.

Sgt. Ker Yang, the Minneapolis police official in charge of crisis-intervention training, said officers are taught to "slow things down and re-evaluate and reassess." Yang has been with the department for 24 years and has a master’s degree in counseling psychology and a doctorate in general psychology.

Records show Chauvin also underwent training in the use of force in 2018. Mercil said those who attended were taught that the sanctity of life is a cornerstone of departmental policy and that officers must use the least amount of force required to get a suspect to comply.

Under cross-examination by Chauvin’s attorney Eric Nelson, Mercil testified that officers are trained to use their knee across a person’s back or shoulder and employ their body weight to maintain control.

But Mercil added: "We tell officers to stay away from the neck when possible."

Nelson has argued that the now-fired white officer "did exactly what he had been trained to do over his 19-year career," and he has suggested that the illegal drugs in Floyd’s system and his underlying health conditions are what killed him, not Chauvin’s knee.

In fact, Nelson sought to point out moments in the video footage when he said Chauvin’s knee did not appear to be on Floyd’s neck.

Nelson showed Mercil several images taken from officers’ body-camera videos, asking after each one whether it showed Chauvin’s knee appearing to rest more on Floyd’s back, shoulder or shoulder blades than directly on Floyd’s neck. Mercil often agreed.

The defense acknowledged the images were difficult to make out. They were taken at different moments during Floyd’s arrest, starting about four minutes after he was first pinned to the ground, according to time stamps on the images.

In other testimony, Jody Stiger, a Los Angeles Police Department sergeant serving as a prosecution use-of-force expert, said officers were justified in using force while Floyd was resisting their efforts to put him in a squad car. But once he was on the ground and stopped resisting, "at that point the officers … should have slowed down or stopped their force as well."

Stiger said that after reviewing the video of the arrest, "my opinion was that the force was excessive." He added that someone using a counterfeit bill typically doesn’t result in a use of force tactic being deployed. He was asked if he made an assessment on whether or not Floyd was offering resistance in the May 25, 2020 incident.

"Initially when Mr. Floyd was being placed in the backseat of a vehicle he was actively resisting the officers … however once he was placed in the prone position on the ground, he slowly ceased resistance," he said, adding at that point, "they should have de-escalated the situation … they continued the force they were utilizing."

Stiger will resume the witness stand on Wednesday at 9:15 a.m.

Chauvin is charged with murder and manslaughter in Floyd’s death.

Instead of closing ranks to protect a fellow officer behind what has been dubbed the "blue wall of silence," some of the most experienced members of the Minneapolis police force have taken the stand to openly condemn Chauvin’s actions as excessive.

Chauvin had been certified to perform CPR, and Minneapolis Police Officer Nicole Mackenzie, who trains members of the force in medical care, testified Tuesday that department policy required him to start aid before paramedics arrived, if possible. MacKenzie noted that an officer is supposed to stop administering CPR when they have been relieved by somebody with a higher level of training, or feeling some obvious signs of death. She also adds the officer can stop if they feel "absolutely physically exhausted," none of which applies to Chauvin, who was seen on multiple body camera footage and bystander video not giving any medical attention to Floyd.

Officers kept restraining Floyd — with Chauvin kneeling on his neck, another kneeling on Floyd’s back and a third holding his feet — until the ambulance got there, even after he became unresponsive, according to testimony and video footage.

The officers also rebuffed offers of help from an off-duty Minneapolis firefighter who wanted to administer aid or tell officers how to do it.

Mercil testified that in his experience, it takes less than 10 seconds for someone to be rendered unconscious with a neck restraint. He said someone having a rush of adrenaline or a higher breathing or heart rate can be affected even faster.

"Have you have ever had a circumstance where an individual has lost their pulse and suddenly come back to life and become more violent?" prosecutor Steve Schleicher asked, suggesting that Floyd was held down long past the point where he might be a threat.

"Not that I’m aware of, sir," Mercil replied.

Earlier Tuesday, Morries Hall, the man seen with Floyd in the SUV and inside Cup Foods last May, appeared via a Zoom meeting at a court hearing in which his attorney argued he has no immunity from prosecution that stems from testimony about his and Floyd’s behavior while seated in the vehicle shortly before police arrived at the scene. Hall has stated he would invoke his Fifth Amendment rights against self-incrimination if he was told to testify.

Hall’s lawyer, Adrienne Cousins, an assistant Hennepin County public defender, filed a motion to quash subpoenas from both the prosecution and defense for her client to take the witness stand. She contends anything he says about his alleged drug activity with Floyd could leave him vulnerable to being charged with third-degree murder in the death of the 46-year-old.

"Your honor, I cannot envision any topic that Mr. Hall would be called to testify on that would be both relevant to the case that would not incriminate him," Cousins told Judge Peter Cahill during Tuesday’s hearing, with the jury absent from the courtroom. "Mr. Hall’s testimony in these matters would specifically put him in the position of being in very close proximity to Mr. Floyd, in a vehicle where drugs were found during a search by police following Floyd’s death."

Courteney Ross, Floyd’s girlfriend at the time of his death, last week gave testimony that Hall sold drugs to Floyd. Cousins said Hall’s testimony could serve as a "link in the chain" for the drugs Floyd ingested shortly before his death, leaving him open to a third-degree murder charge.

Nelson said that in addition to Floyd’s behavior in the SUV that day, he also wants to question Hall about where Floyd got the counterfeit $20 bill, whether Floyd obtained drugs from him, their activities before they arrived at Cup Foods, their interactions with employees inside the store, why he and Floyd gave police false names and why Hall left the state immediately after Floyd’s death. He also said he intends to ask Hall about what was in a backpack he was seen holding during the encounter with police.

"Mr. Hall was seen on a security camera taking something out of a backpack and throwing it," Nelson said during Tuesday’s hearing. "I would ask him … what it was that he threw."

Cahill asked Nelson to put his questions in writing and said he is considering allowing him only to question Hall about his observations of Floyd suddenly falling asleep in the SUV, but nothing further. He said he will hold another hearing out of the jury’s presence to determine if it is possible for Hall to answer the limited questions without incriminating himself.

Prosecutor Matthew Frank told Cahill that such a narrow scope of questioning would create a "huge problem" for the prosecution.

"This questioning would not exist in a vacuum," Frank argued. "There would be other questioning and we would have the right to question him about his credibility and other aspects of that interaction that would lead, unfortunately, and potentially, to him invoking question by question in front of the jury.

"Our dog in the fight is a fair trial for Mr. Chauvin and one trial," Frank said. "What we can’t have is an invocation of this privilege in front of the jury."

Cahill said he will make a decision on whether to allow Hall to take the witness stand following the next hearing on the matter, which he intends to schedule once Nelson submits his question in writing.