Former Minneapolis police officer Mohamed Noor who fatally shot an unarmed woman after she called 911 to report a possible rape behind her home was sentenced Thursday to 57 months (just under five years) on a lesser charge after his murder conviction was overturned.

The sentence announced by Judge Kathryn Quaintance was the maximum allowed under the state’s sentencing guidelines, which call for a range of 41 to 57 months. Noor had sought the shortest possible term.

In Minnesota, defendants with good behavior typically serve two-thirds of their sentence in prison, and the rest on supervised release. He is likely to be released in June 2022.

Noor was initially convicted of third-degree murder and manslaughter in the July 2017 fatal shooting of Justine Ruszczyk Damond, a 40-year-old dual U.S.-Australian citizen and yoga teacher who was engaged to be married. Noor was sentenced to 12 1/2 years on the murder count, but last month, the Supreme Court tossed out Noor’s murder conviction and ordered him to be resentenced for manslaughter. 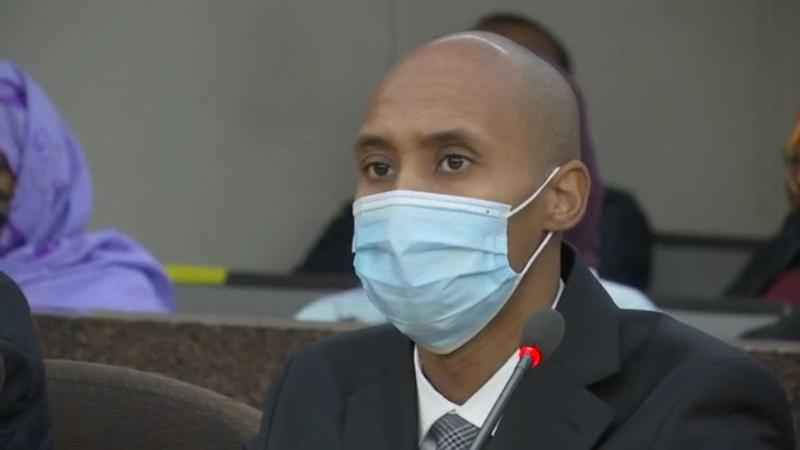 In a statement read by prosecutors, they called Damond’s death "utterly gratuitous" and said that the Minnesota Supreme Court’s overturning of a "poorly written law" didn’t change the jury’s belief that Noor committed murder.

"Our sorrow is forever, our lives will always endure an emptiness," they said.

The victim’s fiancé, Don Damond, gave his statement via Zoom. He started by praising prosecutors for their "sound application of the law" and criticizing the state Supreme Court for its reversal, which he said "does not diminish the truth that was uncovered during the trial."

"The truth is Justine should be alive. No amount of justification, embellishment, cover-up, dishonesty or politics will ever change that truth," he said.

But Don Damond also spoke directly to Noor, saying he forgave him and had no doubt Justine also would have forgiven him "for your inability in managing your emotions that night."

Noor, wearing a suit and tie and donning a face mask, appeared impassive as the victim’s loved ones’ statements were read.

"Our office is pleased with Judge Kathryn L. Quaintance’s decision to sentence Mr. Noor to the statutory maximum of 57-months in prison. It was a sentence our office requested and obtained. Given the circumstances, we feel it is the most just resolution. We hope the family and loved ones of Justine Ruszczyk are able to finally heal."

The attorney representing Noor, Thomas Plunkett, had no comment on the decision.

View a timeline of events in the case via the interactive timeline below or here.