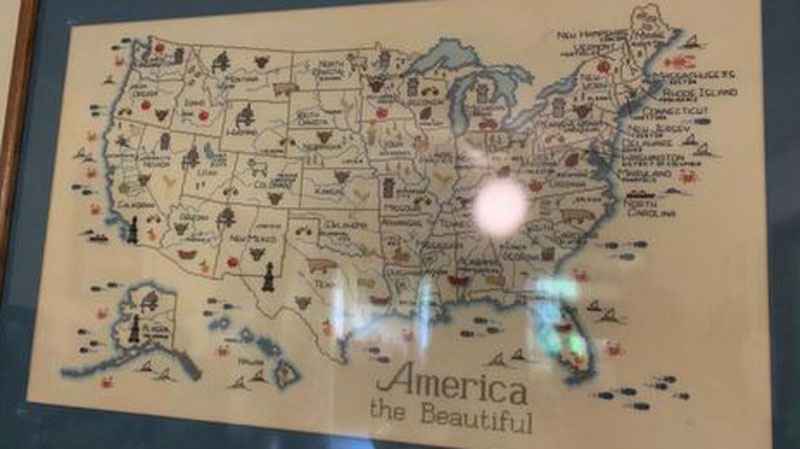 A Minnesota family has a desperate plea to help find a treasured family heirloom.

Throughout his childhood, Tyler Redden would go to his grandmother Rae Elizabeth Kellgreen’s house and see a cross-stitch picture of the United States hanging in her living room. Redden said it was a picture you could not miss, not only because it was so beautiful but because it was obvious how much work went into stitching it.

Kellgreen spent more than a year from 1989 to 1990 stitching the picture. It was intricate and included every state, icons that represent each state and every state capital.

"Anyone who does cross stitch knows you start in one corner and if you make a mistake you have to re-start. So she started this three-foot by two feet tall piece from the East Coast, because she knew that was going to be the hardest part. If she was going to mess up, it was going to be over there. So she started stitching it from the top right and kept going down, knowing that it would get easier as she went," Redden said.

Kellgren had plans to submit the picture, which was her finest piece of artwork, to the Minnesota State Fair. But only after she finished the portrait did she realize she forget to include Kansas’ capital, Topeka.

Being the perfectionist that she was, Kellgren never submitted the picture to the fair. Instead, it hung in her home for three decades and was a story that brought lots of laughs to the family.

Kellgren passed away in August of 2020. The family held an estate sale in October. Somehow, the picture was accidentally placed in the "sell" pile instead of the "save" pile. Redden said the whole family was heartbroken to find out their grandmother’s most precious piece of artwork sold for only $10.

"This cross stitch is so important to my family. It was the piece that, you know, the centerpiece in her living room for the three decades before she passed after she had made it," he said.

They believe a woman in her 50s with a short, blonde pixie cut may have bought it. If you know where the piece of artwork is or who might have it, Redden is asking you to contact him. He can be reached at 651-497-1611 or redde022@umn.edu.

The family is hoping to get the picture back before Kellgren’s Fort Snelling burial, which is in a few months.