“I think out of the gate, it was a small movie but it’s going to be a good movie,” said Anne Healy, the location manager. “This is actually going to be a postcard for Minnesota because we shot at the general store at Marine-on-St. Croix, we were at the drive-in, we were in Stillwater, we were here at the farm, and we were over at Shakopee at a gravel pit.”

Healy met 5 EYEWITNESS NEWS at the farmhouse, which she identified as a potential location due to its historic features. The wallpaper, layout and landscape fit the movie’s aesthetic.

“You would have to pay people a lot of money to make a farmhouse look like this,” said Healy. “We just started scouting and things just fell into place.” 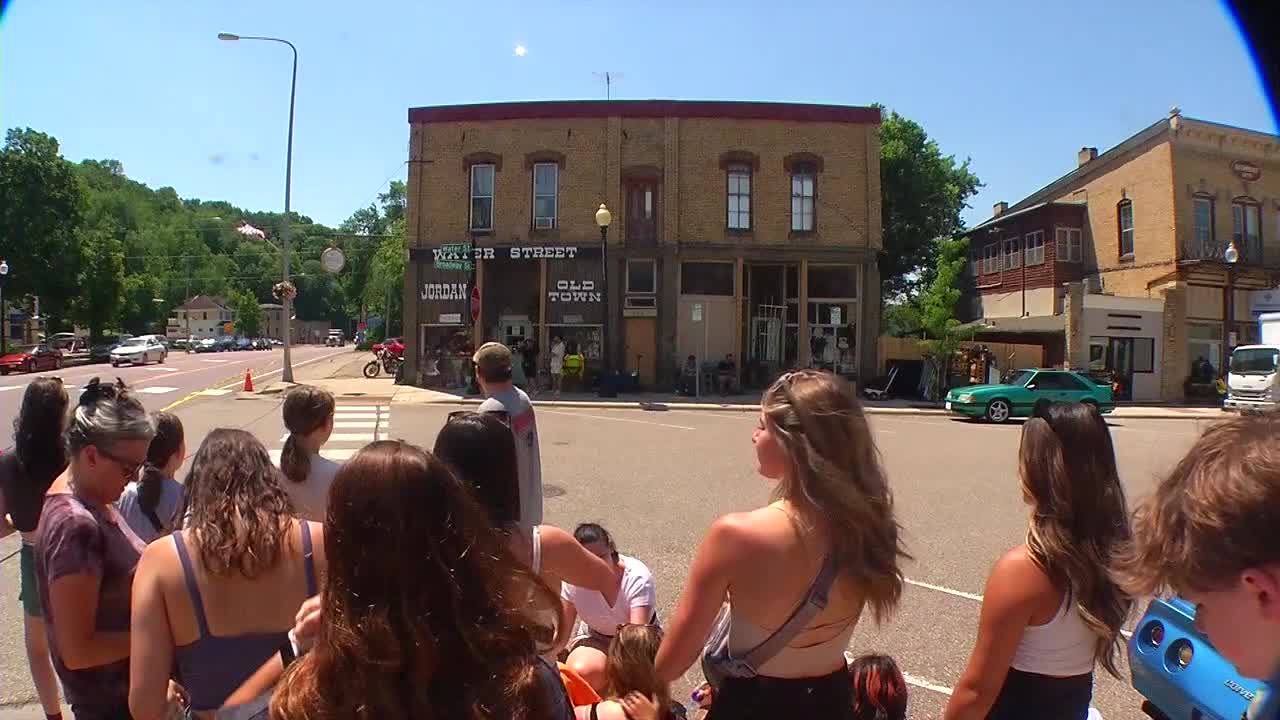 Fans in Jordan, Minnesota try to catch a glimpse of Joe Keery on his way to the production set (KSTP).

She started in the film industry decades ago when a friend recruited her to help scout ice rinks for “The Mighty Ducks.”

“Two weeks ended up being years,” said Healy. “It was just really, really fun and then right after that ‘Grumpy Old Men’ came.”

Those films were followed by “Fargo,” “Beautiful Girls” and “Jingle All the Way.”

“It was just one after the other after the other,” said Healy. “And that was before anybody had any incentives, it was just that we got these movies on these merits of having crew and locations and it was fun to stay here.”

Louisiana started a film tax credit program in 1992. By the early to mid-2000s more states followed suit, according to the National Conference of State Legislatures. At the peak in 2010, 45 states plus Washington D.C. and Puerto Rico had similar programs.

“We weren’t competitive and there wasn’t anything we could do, I just watched my career go away,” said Healy.

There are more than 30 states that currently offer film tax credits.

Film industry advocates pushed for a program in Minnesota for years. In 2021, the Legislature enacted a 25% income tax credit to production companies that spend at least $1 million dollars, in a taxable year, for eligible production costs. The measure passed with bipartisan support.

“It is now a necessarily condition to attracting large or any projects to our state,” said Rep. Dave Lislegard (DFL-Aurora), during a March 2021 House Taxes Committee meeting. “This is really about opportunity for the State of Minnesota, it’s an industry that’s about to explode and they’re looking for a place to go.”

Rep. Joe McDonald (R-Delano) also advocated for the legislation, “What they bring to town and our state, the economic activity and excitement, it’s good for our state and it is good business.”

According to the Department of Employment and Economic Development (DEED), it’s first come-first serve until the program’s annual $5 million cap has been allocated. Unused allocations rollover to the next fiscal year.

DEED told 5 EYEWITNESS NEWS $2.3 million rolled forward from the 2022 fiscal year and therefore $7.3 million is available for the 2023 fiscal year.

The HGTV series Renovation 911, the Discovery+ and Magnolia Networks series Family Dinner with Andrew Zimmern and a Mattel TV commercial package are all at various stages of production. Three films — “Marmalade,” “Merry KissCam,” and “Downtown Owl” — were also all approved under the program.

“It provides jobs, it gets people talking about the Twin Cities,” said Kevin Winge, the executive director of the Woman’s Club of Minneapolis.

He welcomed the “Marmalade” crews to the Woman’s Club in July. About 35 people transformed a room on one of the upper floors of the building, which served as housing for women many decades ago.

“They hung art that was specific to the scene they were shooting,” said Winge, as he walked down the hall. “Everything looked very different.”

The Woman’s Club has hosted movie crews in years past. It was featured in the 2014 film Dear White People.

“My greatest hope for the state of Minnesota and the film industry is we go back to where we once were — a leader certainly in the great north for film and TV shoots,” said Winge.

In addition to renting the space, the Marmalade crew also brought attention to the Woman’s Club at a pivotal time.

“The Club was closed for a year and a half like so many other places around the world so the added value for us is to show the Woman’s Club is back and functioning,” said Winge. “It’s nice to welcome folks back.”

The production spent several weeks shooting at locations across the state. Crowds gathered in Jordan in June to catch a glimpse of Keery.

“The people that did ‘Marmalade,’ they’re thinking about bringing another movie in so, again, it will start over and over again and people will come here because people want to come here,” said Healy. “It gets people out and just it’s really good will, it’s really good will for the state.”

According to DEED, the six projects approved so far represent more than $10.3 million in proposed spending in Minnesota. “Marmalade” is expected to account for nearly $2 million of that total amount. Production companies who apply are required to employ as many Minnesotans as they can.