Minnesota volunteers off to help deadly tornadoes in 5 states

A dozen Minnesotans are on their way to tornado-ravaged towns in Kentucky, Missouri and Arkansas as part of a disaster response operation with the American Red Cross.

The death toll from this weekend’s deadly storms continues to rise, with at least 88 people confirmed dead so far, ranging in age from 5 months old to 86 years old.

Kentucky Gov. Andy Beshear estimated more than 1,000 homes across the state were destroyed. The American Red Cross of Minnesota, North Dakota and South Dakota said 19 volunteers from our region have been deployed so far.

Pj Doyle, of Minneapolis, traveled to Mayfield, Ky. on Monday. Doyle has volunteered with the American Red Cross for 30 years and served at more than 60 disaster sites across the country, including New York after 9/11 and Hurricane Sandy.

"It’s only human nature to think, I wish I could do something. And it’s a great feeling to know that I am actually doing something besides just feeling bad for the folks," Doyle said. 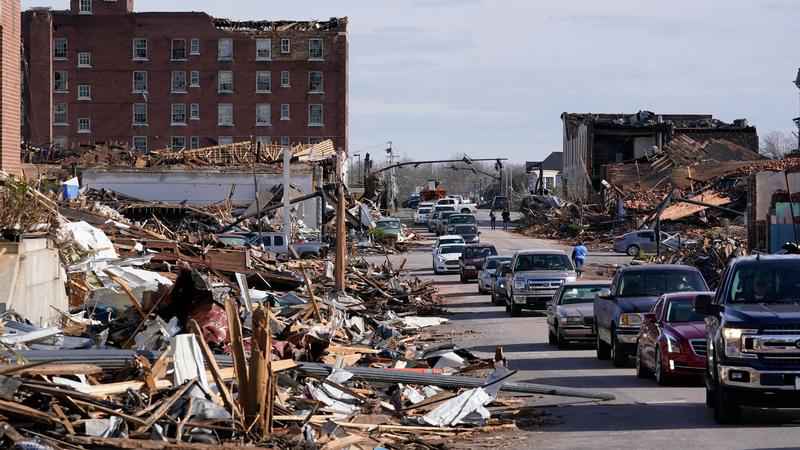 Doyle will be part of a team doing external relations, working out of the response headquarters set up in Mayfield, Ky.

"Each day, it really is a 12-hour day," Doyle explained. "A lot of what we do is to work with the families and help them start looking at what their next steps will be toward recovery. Knowing that housing is a big challenge, our folks are definitely going to be talking with partners to try and help folks address those needs as well."

She said the scope of the devastation in this particular response is heartbreaking.

"Hearing the stories and talking to the family members, particularly when there are so many that have been touched by death, that is going to be a tough assignment," Doyle said.

Doyle expects to help with disaster relief for two to three weeks, which means she may spend the holidays there.

"I have done that before, my family’s used to it. Taking a couple days over the holidays seems like a small price to pay," Doyle said.

The American Red Cross expects more Minnesotans will deploy for tornado relief in the coming weeks.

"It’s hard to determine what the full needs will be of this disaster," said Regional Communications Director Carrie Carlson-Guest. "We’re already looking out into January, knowing that we’re going to need to plan. We’re going to be there as long as the need is there. We’re all coming together as a team to figure out, how do we best take care of those emergency needs now and figure out what the plan is a little bit longer term?"

Carlson-Guest said Minnesotans can also help from home in a variety of ways.

"If you’re a Minnesotan not affected by this disaster, one of the great things you can do is donate blood," she explained. "The American Red Cross is in an emergency blood shortage. Now, every blood drive in the disaster area has been canceled. They’re not going to be able to hold them for quite some time."

For more information on donating blood or money, or on serving as part of a disaster response team with the American Red Cross, click here.