According to court records, the state’s Supreme Court ruled to reverse the third-degree murder conviction and send the case to district court, where Noor will be re-sentenced for his second-degree manslaughter conviction. He was originally sentenced to 12½ years in prison.

The move comes after Noor’s attorney, Thomas Plunkett, filed a petition requesting the high court to hear the case after the Minnesota Court of Appeals ruled earlier this year to uphold the 2019 conviction for the shooting death of Damond in July 2017. A petition was granted days after the court upheld the conviction.

A jury convicted Noor in the 2017 death of Justine Ruszczyk Damond. The Australian woman had called 911 to report a possible sexual assault behind her home. When the former officer and his partner responded to the alley behind her home, Damond approached the squad car. Noor fired his gun across his partner, striking Damond, who died moments later of a gunshot wound to the abdomen. 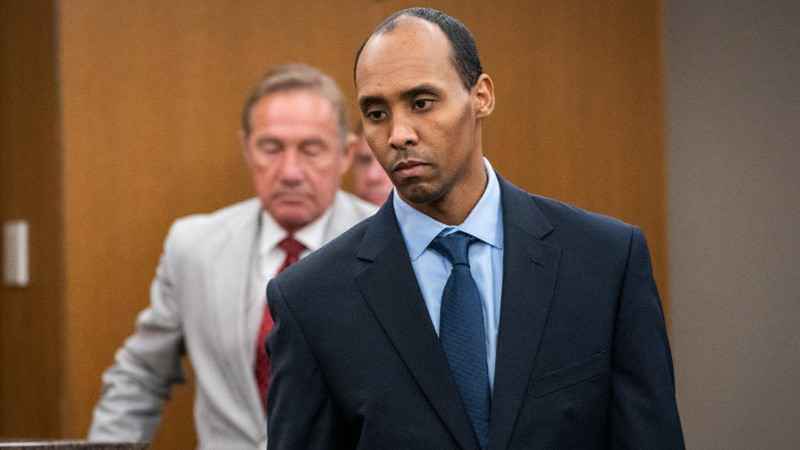 In this Friday, June 7, 2019, file photo, former Minneapolis police officer Mohamed Noor walks to the podium to be sentenced at Hennepin County District Court in Minneapolis. The Minnesota Supreme Court will hear oral arguments Wednesday, June 9, 2021, in Noor's case, who was convicted of third-degree murder in the shooting death of an Australian woman who had called 911 to report a possible sexual assault behind her home.[Leila Navidi/Star Tribune via AP, Pool]

According to the ruling Wednesday, the court wrote that "the mental state necessary for depraved-mind murder… is a generalized indifference to human life, which cannot exist when the defendant’s conduct is directed with particularity at the person who is killed."

"In short, what this opinion says is that third-degree murder can’t apply when there’s a specific victim that a person is aiming for," University of St. Thomas law professor Mark Osler said. "Had it been a group of people that approached the squad car, that would have been a different question but it was just the one person, it was clearly just the one person Noor was aiming at."

The ruling went on to say the evidence was "insufficient" to uphold his conviction.

"We’ve been making that argument since [Mohamed] Noor was charged with third-degree murder," he said. "We’re so grateful he’ll be coming home to his young family."

The district court will resentence Noor on the second-degree manslaughter charge. A court date has yet to be set.

The third-degree murder statute has been hotly debated and used to charge police officers in Minnesota in deadly encounters.

The court’s ruling Wednesday could give Derek Chauvin grounds to appeal his third-degree murder conviction in George Floyd’s death, but that would have little tangible impact since Chauvin was also convicted of the more serious count of second-degree murder.

The Mohamed Noor appeal team is happy for Mr. Noor and his young family. They have had a long journey; now fairness has been delivered to a person who is a devoted to his community. We just got off the phone with Mohamed his words, ‘with hardship comes ease’ he is so looking forward to hugging his son as soon as possible. We have always maintained that this was a tragic case, and we are grateful for an exceptionally well-reasoned and unanimous opinion from this State’s highest court."

We are disappointed that the Minnesota Supreme Court chose to reverse the third-degree murder conviction of Mohamed Noor. The court overruled prior case law supporting the Hennepin County Attorney’s Office charging decision and we disagree with their analysis of the law. However, we respect and acknowledge that the Minnesota Supreme Court is the final arbiter in this matter. Accordingly, we must and do accept this result.

The court’s decision leaves intact the Manslaughter II guilty verdict by the jury against Mohamed Noor. Further, the Supreme Court notes in its opinion that Mohammed Noor has conceded that the evidence at trial was sufficient to support his conviction of second-degree manslaughter. His conviction was just. The case has been remanded to the trial court for sentencing and we will seek the maximum sentence possible.

"My family and I are deeply saddened by the MN Supreme Court ruling to overturn the 3rd degree murder conviction of Mohamad Noor in the needless and reckless murder of Justine. In many ways, this has felt like a double blow against justice. My hope and work since Justine’s death has been to try to prevent a further loss of life at the hands of stressed and inadequately trained police officers. The Minneapolis Police Department has not made any meaningful progress towards transformation. And now Noor is not being held accountable for killing my fiancé, an innocent person who called police from our home to report a female in distress. I have lived with the tragic loss of Justine and none of this can hurt my heart more than it has been, but now it truly feels like there has been no justice for Justine."