A rally outside the Minnesota Department of Education (MDE) in Roseville brought out dozens of families on Tuesday.

"I want to fight for kids who don’t have food because I feel bad for them," 12-year-old Anas Abdulkadir said.

Everyone in attendance came in support of thousands of Minnesotans experiencing hunger.

"Last year at this time we were serving 75,000 kids a day. Right now we are able to serve 10,000; that’s 65,000 at-risk youth in Minnesota going without meals and snacks," said Aimee Bock, executive director of Feeding our Future, a nonprofit that utilizes federal dollars to feed Minnesota students.

Bock works with community organizations around the state and says 98% of the population they serve are minorities. 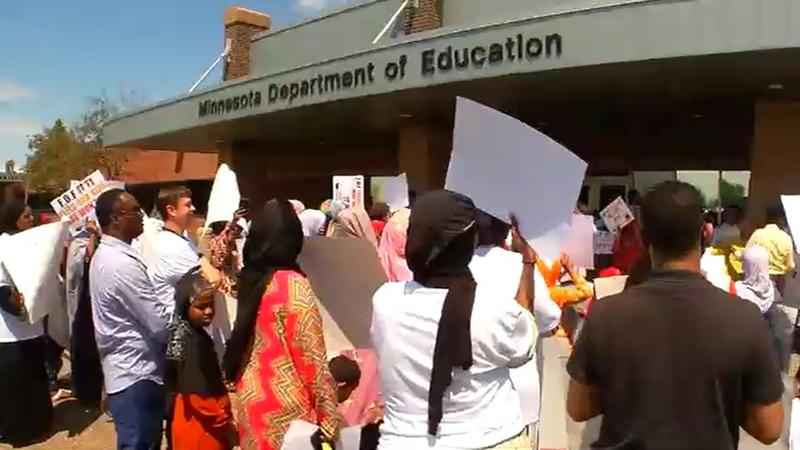 "Late last summer with the pandemic, with federal waivers and the civil unrest in Minneapolis, the need skyrocketed," Bock said.

She says MDE is not approving applications of many of the community partners she works with, like Minneapolis nonprofit Tasho, which currently helps 1,600 children a week but says that would be double if MDE would approve their application into a federal reimbursement program.

"We are limited in our capacity. The need is there, but the state is unwilling to help," Tasho Deputy Director Abshir Omar said.

"As it stands right now, I have applications sitting at MDE’s offices since Nov. 30," Bock said.

Genese and her three children have utilized the federal food program and would like to see it continue.

In a statement, MDE said there are 2,286 approved sites across the state but didn’t say why many applications haven’t been approved, citing ongoing litigation.

"With the flexibilities offered by the USDA, we are experiencing an unprecedented amount of site applications. We are reviewing applications as quickly as possible while ensuring all USDA regulations are met," the department said.

But families in need say it’s not fast enough.

"One hundred thousand kids per day, conservatively, are not eating in Minnesota. Federal entitlement dollars are not coming to our state because they (MDE) refuse to take action or follow the law," Bock said.