The deafening roar of C-130 Hercules transports echoed up and down the runway Saturday at the Minnesota National Guard’s 133rd Airlift Wing, bringing hundreds of guard members home from the nation’s capital.

"Ultimately this is a historical event, no matter how you look at it,” Minnesota Air National Guard Capt. Ian Carpenter said. “Pretty humbling, I would say. To be able to support our nation in that way.”

"What we are doing now is exfilling the 800 soldiers and airmen that we brought to Washington, D.C., last weekend," said Col. James Cleet, commander of the Air Wing. “It took 15 missions and 39 sorties to get all 800 to DC.”

With just 24 hours’ notice, the Minnesota National Guard got word of their mission: join a force of 26,000 National Guard personnel to help secure the nation’s capital during inauguration week. 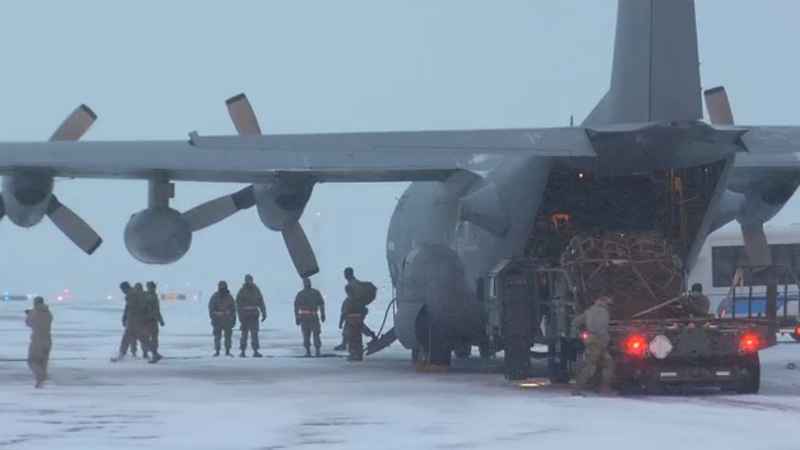 "While on the ground there, they supported Capitol Police for crowd control,” Cleet said. “Pretty much a quick reaction force for anything that would have happened similar to Jan. 6."

The focus of this operation, Inauguration Day itself, was exactly two weeks after the attack on the Capitol.

The captain says most encounters on the street were peaceful, even welcoming. But amid all the security, there had to be constant awareness.

"Really throughout, it was just being prepared,” Carpenter said. “Trying to think through the possible things that would happen. Being cognizant for any activities that seemed out of place."

Many of the guard personnel had been present during the riots last spring in Minneapolis following the death of George Floyd.

“We gave them briefings on rules of engagement, use of force, procedures and techniques in crowd control,” Cleet said.

Members of the Minnesota guard were able to stay in area hotels, but units from other states camped out in parking ramps and Capitol complex hallways.

Guard troops pour into Washington as states answer the call

There were no injuries or incidents among the Minnesota contingent.

There is a sense of pride in keeping people safe.

“It was a huge honor to be there,” Pfc. Molly Nygren said. “Like just having our presence there. It was just cool to be a part of that and be a part of history.”

After landing, hundreds of guard members lined up for processing, including getting COVID-19 tests.

Many, though, say they’re happy to be home after doing their part.

“For us to be able to support something like that in our nation’s capital, to be present for an inauguration, we’ll look back on it in the history books and it’ll be something to tell our kids about," Carpenter said.