Minnesota moms desperate for baby formula scammed out of money

As the baby formula shortage continues, Minnesotans have come together to help other parents in need. In many cases, they’ve donated formula, breast milk, and have even gone door-to-door to deliver hard-to-find brands of formula.

But despite all the good, there are also people trying to take advantage of families in need. It’s a problem the Facebook group “Formula Finder – Minnesota” is now having to deal with. The group connects parents to resources where they can find formula. Members post pictures of stores that are stocked and people who have extra often donate or sell it to other parents in need. But in the last week, the group has seen a spike in scams.

“One thing we see a lot of is people stealing other people’s photos of formula like in a house and saying, ‘Hey, I have this, I’m willing to ship it,’ and then they get your info, your address and then once you send the payment they never have it,” Jess Skalicky, a group moderator for Formula Finder – Minnesota said.

Michelle Grob, a mom from Champlin, never thought she’d be one to fall victim to a scam.

“No, I never thought that someone would stoop that low to scam people out of baby formula and money. Baby formula is so expensive to begin with,” Grob said. 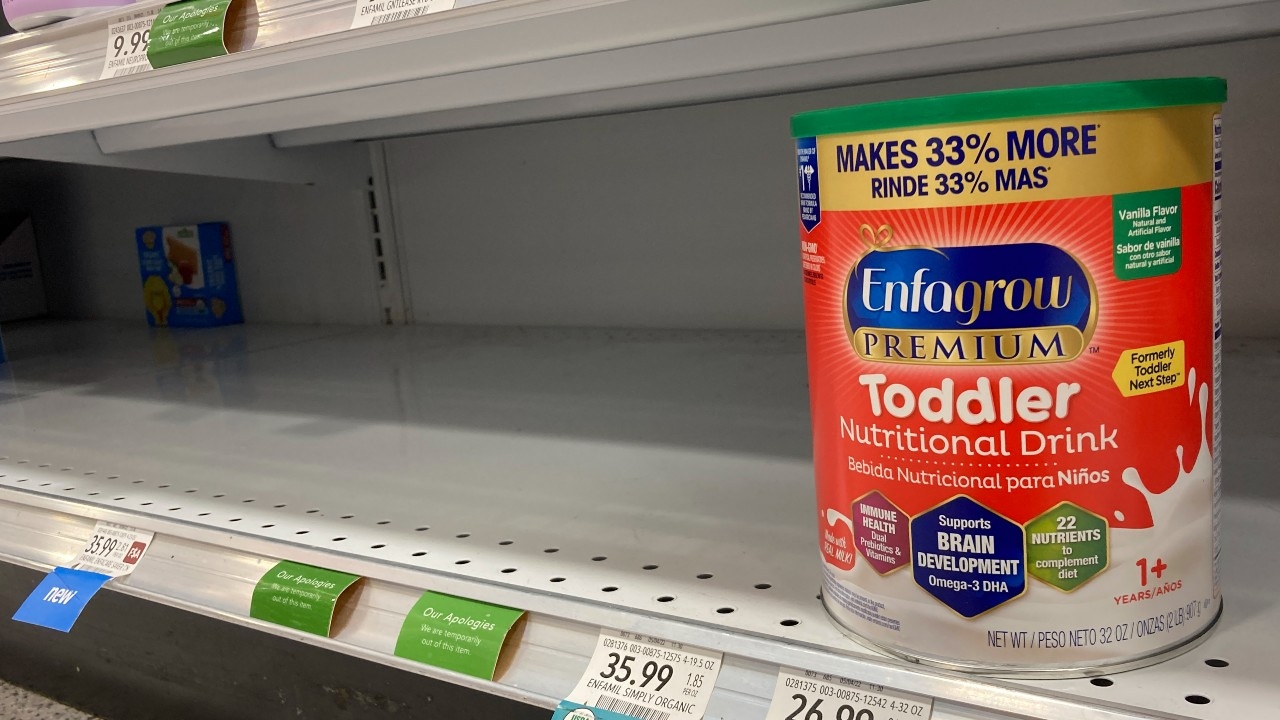 A can of Toddler Nutritional Drink is shown on a shelf in a grocery store, Friday, June 17, 2022, in Surfside, Fla. (AP Photo/Wilfredo Lee)

For the last the two months, she and her wife have struggled to find formula for their 4-month-old baby, Lincoln. He’s allergic to cow’s milk and has to have a specialized formula.

“Formula is hard to find no matter what, so we literally drive hours to get to anything we can find,” she said.

They’ve driven all over the state to pick up Lincoln’s formula when they can find it. That’s why they didn’t think twice when a woman on the page offered to ship it to them.

“She gave the background. Her sister had the formula and they were willing to ship it because it was such a far distance,” Grob said, adding that she and the woman talked back and forth over Facebook Messenger for hours.

Eventually, Grob decided to send the money, $170, and then the woman stopped responding.

“(She) just ghosted us. She blocked us on Facebook and the person we sent the money to blocked us as well,” Grob said.

Turns out, she wasn’t the only mom in the group to be scammed by the same woman. Four other mothers reached out to Grob sharing the same story, all desperate for formula to feed their babies.

“That’s ultimately why I decided to send the money. We really just needed the formula,” she said.

Skalicky said the Formula Finder – Minnesota group moderators do what they can to screen for scammers, but even they don’t catch everyone. She encourages parents to do a live video chat with the person before sending any money.

“Insist that the person actually do a live video chat with them when they’re at the post office with the formula in their hand and the address to show, yes, I am shipping it,” she said, “and any legitimate person who is willing to ship you formula and go to a post office is also going to be willing to take that five extra seconds to show it to you in a video.”

Grob said she won’t make this mistake twice. From now on, she’ll either video chat with senders or only meet in person.

“It’s not even about the money. We really just needed that formula,” she said. “You’re essentially taking formula out of a baby’s mouth.”

She’s reported the transaction to Venmo but hasn’t gotten her money back. Grob is hoping to connect with the other moms who lost money and take their stories to the police.