The “Freedom Fest” protest Saturday at the Minnesota Capitol was a small one of about 20 people. The gathering of Trump supporters was dwarfed by a high-level security presence.

“The State Patrol, the National Guard were there and they handled it very well,“ says State Rep. Jim Nash, R-Waconia.

State troopers lined up in large numbers around the Capitol. There were also 100 members of the Minnesota National Guard’s Military Police on hand.

“We don’t know what kind of threat we might face, and so we have to be prepared for all kinds of situations,” said House Majority Leader Ryan Winkler, DFL-Golden Valley.

The protest itself was low-key. Some participants were carrying American flags — and firearms. 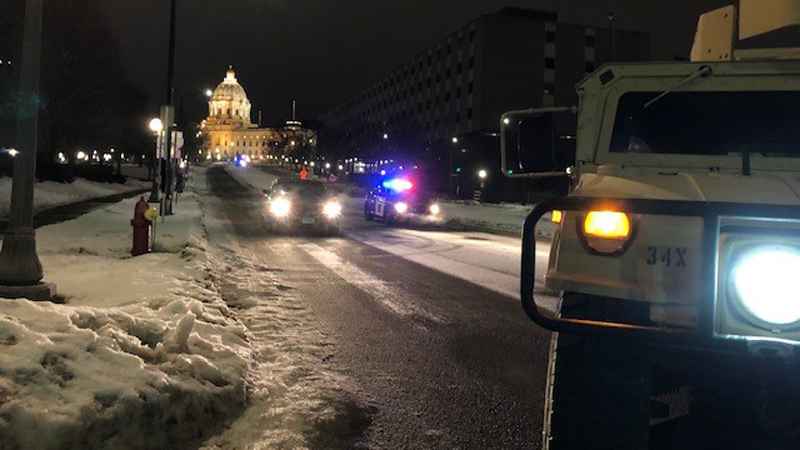 A Humvee and squad cars block a road leading up to the Minnesota State Capitol on Saturday, Jan. 16, 2021, in St. Paul. [Richard Reeve/KSTP]

The ramped-up security comes after a December FBI bulletin warning of evidence of right-wing extremists targeting the Minnesota and Michigan state capitols on Sunday. That concern was heightened after the Jan. 6 attack on the U.S. Capitol.

“Ideology that wants people to use armed resistance to a legal government is a danger and a threat,” Winkler said. “And we need to be aware of it.“

In a letter Thursday, Gov. Tim Walz called for members of the Capitol Area Security Committee to meet at the end of this month for suggestions for ensuring safety in the Capitol complex.

“There is no doubt that the hateful rhetoric, calls to incite violence, and threats to life and property have significantly changed the way we conduct business in the Capitol," Walz wrote.

Winkler says ideas such as metal detectors and stricter gun rules inside the Capitol should be considered.

“We don’t have metal detectors like almost every other government building has,“ Winkler said. “And we have basically no restrictions on where firearms can be carried within the Capitol.”

The Capitol has had a perimeter fence in place since the riots last year after the death of George Floyd.

Nash says Minnesotans have the legal right to carry guns inside and that metal detectors would create a logjam, but he says there are other ideas.

“Making physical improvements to things that we know need to be addressed,“ Nash said. “And some of these are cameras, automatic locking doors, different things like that.“

Security chief says no credible threats at Minnesota Capitol; plan in place for any protests, violence

Both men believe that an increase in sworn police officers is needed at the Capitol complex.

“I think we need to determine whether we have adequate staffing from the State Patrol and Capitol security around the complex,“ Winkler said. “And whether we have the ability to respond quickly enough to a dangerous situation that’s emerging.“

“One of the things that I would like to do is increase the number of sworn peace officers that we have on staff to a larger number,” Nash said.

Both lawmakers say there is a delicate balance at work here as well.

“I do not feel unsafe at the Capitol, I think that the team in place does a fantastic job,” Nash said. “ I don’t want to overreact, but I don’t want to have an environment where people don’t feel safe.“

Another protest is scheduled at the Capitol on Sunday.

It’s unclear how many people will appear at the complex, but the ramped-up security is expected to continue through the week, or at least until the inauguration of President-elect Joe Biden on Wednesday.

“Obviously, we can make something almost perfectly safe, by totally locking it down,” Winkler said. “That is completely contrary to the democratic nature of the work that we do. So we have to find the right balance.“