The pandemic has taken a toll on sports from the high school level to international competition. On Saturday, the top women’s under-18 hockey teams were set to compete in Sweden. Just before Christmas, however, the Women’s World Championship was canceled.

“I was pretty upset,” said Danielle Burgen, a forward who plays for Chisago Lakes High School. This was her final year eligible to compete as part of the U18 team.

Burgen helped win the gold medal as part of Team USA in the 2020 U18 Women’s World Championship. The United States has won the competition for the last five out of six years.

“It was life-changing, I’ve never experienced anything like it before,” said Burgen, who described the elite level of play. “Just standing at the blue line at the end of the game when everyone’s arm-in-arm with each other, singing the national anthem, knowing that we won it all is an unbelievable feeling.”

Ten Minnesota high school players are part of the 23-member roster this year. 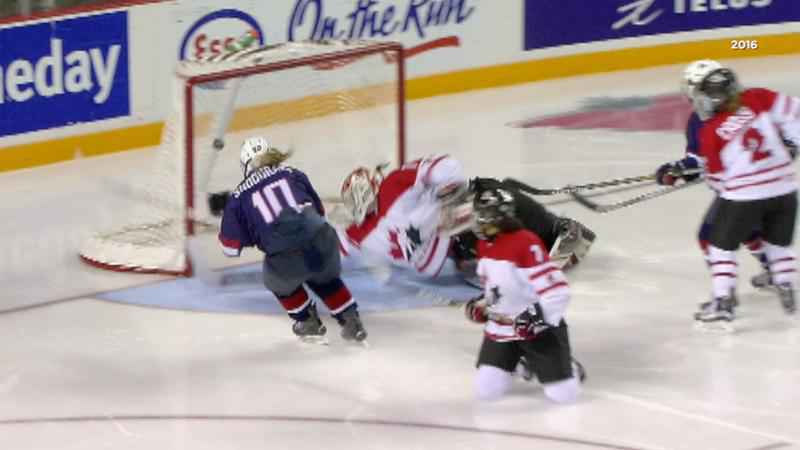 “It just was like a dream thinking about it – going to a different country and playing with the USA jersey on with the best people is just like a dream come true opportunity,” said Josie St. Martin, the youngest member of the team.

She described feeling devastated when she learned they would no longer be traveling overseas to compete.

“To get better, for the majority of the girls, is to play at the highest level you can,” she said. “When you get this opportunity and then it gets taken away from you, it’s really hard to get better at like this sport, especially for women because we don’t have as many of the opportunities.”

The International Ice Hockey Federation (IIHF) announced it was canceling six tournaments scheduled for January due to the spread of the omicron variant.

“I’ve just been working super hard and my focus has just been to make this team and everything that I’ve been doing is to get better so I can hopefully get the opportunity to play and then put on the USA jersey,” said Minnetonka forward Ava Lindsay. “It’s really hard hearing that there was not even going to be a reschedule, just straight cancellation.”

The decision came about two weeks before the athletes were set to compete.

“It was just really devastating and disappointing because I was really looking forward to it and I had really started nailing down all of my quarantine,” said Emma Peschel, a defense player from Edina. “My whole team was wearing masks for me so I could continue to play and it just all got taken away and it was really hard to hear.”

Just two days after the IIHF canceled the tournament, the men’s World Junior Championship started in Canada. The hockey community responded to the disparity quickly, sounding off on social media. A petition to reschedule the women’s event has amassed more than 84,000 signatures.

This is the second year in a row the women’s event has been canceled. The U18 Men’s World Championship went forward in the spring of 2021. This year, it’s still scheduled for April and May of 2022. There is no women’s equivalent for the under-20 U.S. National Junior Team. The World Junior Championship also took place in 2021.

As the outrage grew, the IIHF president responded. In a statement posted to Twitter, Luc Tardif wrote, “This is a COVID issue […] Is there an economic incentive to host the men’s World Championship and World Juniors every year no matter what? Absolutely. But people misunderstand that this is because we favor men’s hockey over women’s, which is completely false."

In a lengthier explanation on the IIHF website, he said the men’s World Junior teams were already in a protected environment at the time, while athletes competing in January still had to travel to event locations.

On Dec. 29, the World Juniors was ultimately canceled due to COVID spread among players. Tardif told reporters the IIHF is considering rescheduling that event.

“I don’t want and I think the organization committee, don’t want to give up,” said Tardif. “So we’re going to take the next month to think about it and maybe come up with a good surprise. We’re not going to give up, I think we deserve that to the young players and give them this important competition.”

Minnesota athletes hope the IIHF will reschedule the U18 Women’s World Championship as well.

“I think that just the something that’s right,” said Linsday. “If COVID stuff and whatever else going on hopefully starts to settle down, I think being able to figure something out in a safe way for us to play is definitely a goal that I hope that everyone reaches.”

Burgen told us, “I think we’re just really hoping to be able to play at some point this year. We really want this to get rescheduled so we can have the opportunity to put on the jersey and play for our country.”

When 5 EYEWITNESS NEWS asked whether the women’s event will be rescheduled, a spokesperson for IIHF told us, “All our tournaments of any category (women’s U18, men’s senior, men’s U20) originally planned in January have been canceled due to the Covid-19 situation with record-high numbers in most countries and during the upcoming weeks there will be discussions concerning a potential rescheduling of these tournaments as well as of the 2022 IIHF World Junior Championship.

For the current host country Sweden it’s unfortunately not possible to move the 2022 IIHF Ice Hockey U18 Women’s World Championship to other dates later this year, which means that for a rescheduling there would be the need not only for new dates that work for everybody but also for a new host and we will have a call with all participating countries to discuss.”