As the sun set at the Minnesota State Capitol on Thursday, Dr. Michelle Chestovich gathered with loved ones, community members and mental health advocates to raise awareness about physician suicide.

“She was an amazing woman, if you knew her you knew the sunshine that twinkled in her eyes,” Chestovich said. “Everyone talks about her compassion and her kindness, she was pure love and light.”

Butler was a radiologist and mother to three young children. 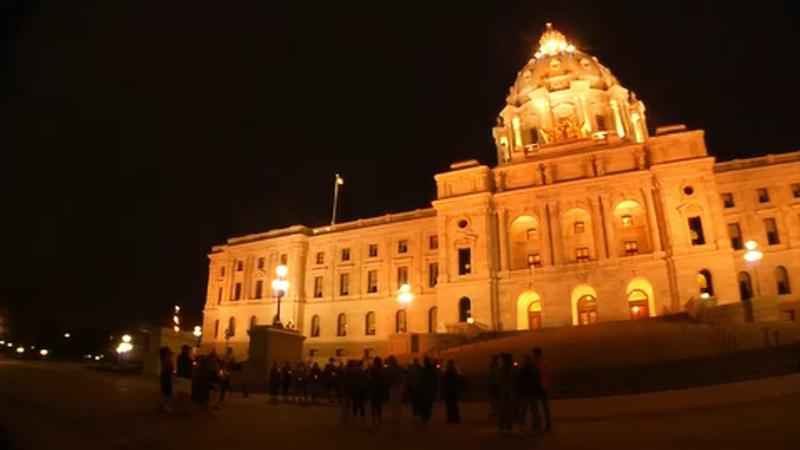 “She was an amazing woman and a bright star that burned out too soon,” Chestovich said.

“What I want people to realize is this can and does happen and we all need to take care of ourselves and look after our colleagues,” she said. “We need to learn how to support one another and talk about it. My new frequent phrase is ‘It’s OK to not be OK.’ We need to normalize that life is hard and it’s okay to reach out for help and it’s okay to ask the hard questions.”

It’s estimated each year 300 to 400 doctors nationally die by suicide, according to the Council of Residency Directors in Emergency Medicine. The rate is more than double that of the general public.

Female physicians are more than two times more likely to end their life than the general public.

She’s been helping doctors, nurses and others in the field access mental health support during the pandemic.

“Physician burnout and health care, mental health, it’s always been an issue even prior to the pandemic,” she said. “I think that what we’re seeing is that the pandemic was sort of the straw last straw. […] Wave after wave of caring for some of the most critically ill patients that any provider, any healthcare worker has ever seen in their careers and then seeing death on a level that, and on a frequency, that has never before been seen.”

Throughout the pandemic, a growing number of health care workers have reached out to her organization. Her team then creates a list of mental health services that are covered by that person’s insurance.

Doctors, nurses and others that work in the industry can call 651-321-2340, email or message her organization on social media to get started.

“It’s more than burnout, it’s more than compassion fatigue,” she said of the calls she’s receiving. “This is trauma, and it’s not sustainable.”

Sakizadeh McConnell understands the toll trauma can take over time, especially while working the relentless schedule of so many healthcare workers.

She experienced a significant trauma on the job several years ago, while working as a nurse. Sakizadeh McConnell was diagnosed with PTSD but said she was unable to reduce her workload due to staffing concerns.

“I’m really lucky to be alive,” she said. “I could have been Gretchen. I could have been Radhika and I’m so overwhelmed sometimes when I do these intakes and I speak to them because I can hear it in their voice — I know exactly what they’re feeling.”

Sakizadeh McConnell created her organization to support others in crisis.

“I think we need to change within the culture of healthcare and that starts with giving people permission, give them a safe space to tell their stories,” she said.

Dr. Kellie Lease Stecher is joining her in that work. She founded the organization Patient Care Heroes during the pandemic, which is a platform to tell those stories.

“The biggest thing I wanted people to realize was this – we’re human,” Dr. Lease Stecher said. “Everyone thinks that physicians and nurses are superhuman, and the toll is obviously pretty significant.”

She also wanted to create a space for physicians and others in healthcare to access mental health resources stress-free.

In Minnesota, the Board of Medical Practices has been asking about a physicians’ mental health history when they apply or renew their license. The Board approved changes to the language at a Sept. 11 meeting, which will remove the word “mental” from the question. Instead, physicians will be asked if they have “any condition that is not being appropriately treated” that could impair their ability to do their job.

The changes will be implemented on Jan. 1, 2022. Board Executive Director Ruth Martinez told us the board plans to “continue engagement in future conversations about possible further amendments.”

Stecher hopes there will be additional progress.

“Thankfully, we are changing some of that language, however, the stigma around mental health continues,” she said.

She urges health care workers to seek help if they need it.

“There is no career in a world that would be worth you risking your life. If you need to leave medicine, leave medicine,” Stecher said. “If you need to take a leave of absence, take a leave of absence. If you have a therapist that you’re kind of so-so about, you need to find someone that you really jive with. If you are a woman who is pregnant having issues, then postpartum anxiety, depression, you need to find someone that you can talk to about these things but there’s literally nothing that is worth you jeopardizing your personal safety.”

“My dear sister Gretchen continues to whisper in my ear, keeps talking, we need to make some changes,” she said.

If you need help, there are resources available: