Minneapolis teachers are striking once again Monday, after the union says some progress was made during negotiation sessions this past weekend.

However, there’s still no deal in place, and schools will be closed once again. While negotiations during the strike have been happening for the past seven days, this is the fifth day of school that has been canceled.

Teachers began picketing Monday morning at 7:30, and union leaders provided an update on negotiations at 10:30 a.m. You can watch their full news conference in the video player above.

During the news conference, Greta Callahan, the president of the Minneapolis Federation of Teachers, said they went to the negotiating table Sunday, and members of the district refused to negotiate for six hours, adding the union was ready to counter.

“Not only are we seeing a refusal to bargain, but a refusal to acknowledge what we’re really getting at here, and that is the district has put temporary agreements on the table, and that has to stop,” said Shaun Laden, the president of the ESP Chapter of the Minneapolis Federation of Teachers. 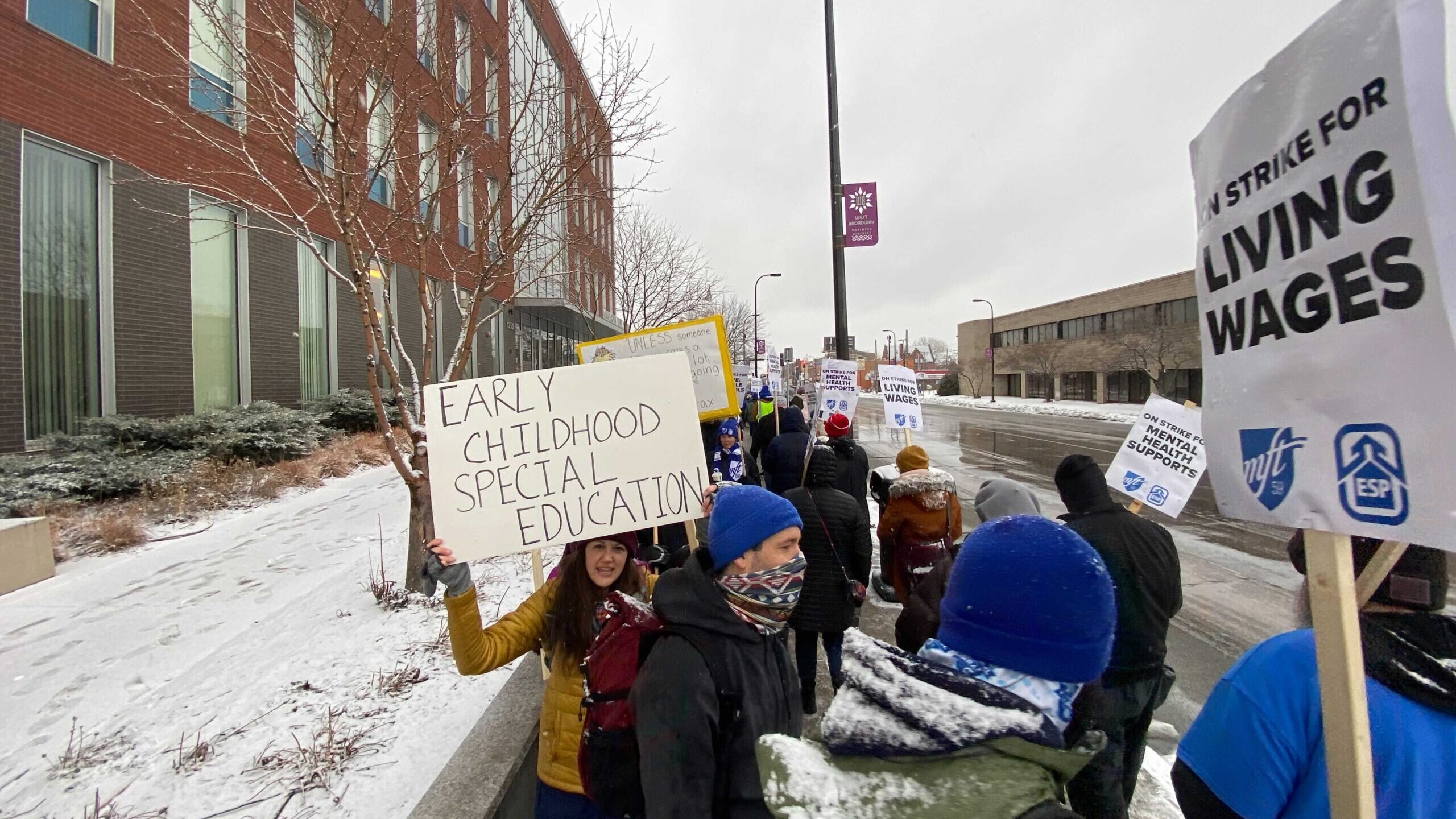 In the latest district update, teacher would have a minimum starting salary of $50,000, with a $2,000 bonus to every teacher in year one. There would also be a 5% – 12.5% increase to one-six year teachers, and highest increases to first year teachers.

The district says the total cost of all proposals is $21.9 million for the first year, and $23.1 million for year two.

Meanwhile, for ESPs, the district’s proposal includes a $3,000 bonus to every ESP in Year 1, and a 5% step advancement in the second year of the proposal. In addition, the district is also offering a 2-8% cost of living adjustment for both years.

“We know they have the money, we know it might take some days for them to figure it out, but we know they have it. They have American Rescue Plan money, they have general fund money. It’s time to invest in Minneapolis, we can’t afford not to,” said Matt Pellowski, a teacher for Minneapolis Public Schools.

“These funding issues unfortunately are not an exclusive issue to Minneapolis. Minnesota does not fully fund the cost of education. Funding increases have not kept up with the cost of inflation for decades,” said Kimberly Caprini, the treasurer for the Minneapolis School Board.

Both sides inched closer to their goals over the weekend after spending hours at the negotiation table, but the Minneapolis Public School District says their most recent offer is their financial limit.

“If we accepted, we will have to make other drastic cuts unless the state makes additional funding in the next two years,” said Caprini.

The district posted an update over the weekend on each side’s contract proposals, which at the time sat more than $100 million apart. The union cut about $3 million off its proposal, and the district had increased its offer by about half a million dollars. In addition, MPS offered starting salaries for teachers at $50,000.

Meanwhile, the union proposed over the weekend a 44% wage increase for education support professionals. The district countered with 9%, which would essentially push the lowest paid ESPs to around $18/hour.

A previous update from Minneapolis Public Schools stated they included a $3 million increase to mental health support, and offered smaller class sizes in six high needs schools – two things which MFT has been pushing for – however, those items were not listed as part of the Monday negotiation update on the district’s website. Union leaders said in a separate video update they are looking for contract language for the mental health support.

While union leaders say this is closer to their demands, this isn’t exactly where they want to be.

“Unfortunately yesterday (Saturday), they said sorry we are not giving you anything else, and then we were dismissed early. That is reckless for our students,” said Callahan.

U.S. Rep. Ilhan Omar also sounded off on the strike, as well as others, at noon outside the MPS Davis Center.

So far, five days of classroom instruction have been lost, and the school district says it is examining school-by-school data regarding instructional time being lost to the strike, and will determine when it is made up.

State law requires at least 165 instruction days for students in grades 1-11. Time lost due to the strike will be made up either over spring break, extending the school year, reducing professional development days, or other means that meet the state’s requirements.