“We do not have the finances to expand the cost of our contract proposal,” said Kimberly Caprini, Minneapolis School Board Treasurer, adding, “we have been thinking creatively of ways we can compromise. But we have reached our financial limitation.”

Earlier Tuesday, more than 30,000 students have now been out of class for a week. Tuesday, some of those students are planning to join teachers on the picket line. 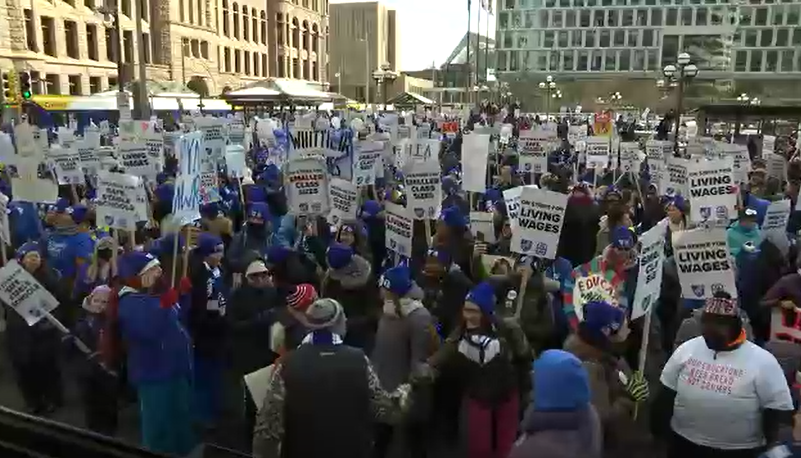 Monday, the union said the district is moving on some of the demands teachers want, such as class size caps.

Until a deal is made, the district says no pay, benefits or compensation will be given to – or accrued by- a striking employee.

Union members are hearing calls to hold the line, and getting some support from a prominent lawmaker.

“As a proud alum of MPS, someone who has had her kids educated from within MPS, I know how important and valued our teachers and educators are 106 and I want to make sure they have everything they need,” said Congresswoman Ilhan Omar (D-Minnesota).

5 EYEWITNESS NEWS has not been made aware of any significant movement in Monday’s contract negotiations.

Union leaders said they were still waiting on a counter offer from the district in response to an offer put on the table Saturday, and added overnight the district refused to negotiate for the second day in a row.

The district has said it has reached its financial limit on what can be offered.

So far, six days of classroom instruction have been lost, and the school district says it is examining school-by-school data regarding instructional time being lost to the strike, and will determine when it is made up.

State law requires at least 165 instruction days for students in grades 1-11. Time lost due to the strike will be made up either over spring break, extending the school year, reducing professional development days, or other means that meet the state’s requirements.